Benchmark Metals Inc. (TSX-V: BNCH) (OTCQX: BNCHF) (WKN: A2JM2X) is pleased to announce new results from infill drilling at the Cliff Creek Mid Zone, including 3.05 metres core length of 56.65 grams per tonne gold and 79.75 g/t silver or 57.65 g/t gold equivalent* within 68.58 m core length of 3.07 g/t gold and 11.72 g/t silver or 3.22 g/t AuEq* in drill hole 21CCRC020 (Figure 1). Infill drilling on the east side of the Cliff Creek Mid Zone has intersected near-surface high-grade and bulk-tonnage mineralization in a portion of the Mid Zone that was thought to be weakly to modestly mineralized based upon intermittently sampled historical drilling. These results have the potential to add significant, higher-grade gold and silver ounces in an updated mineral resource estimate. Benchmark’s flagship Lawyers Gold-Silver Project is located within a road accessible region of the prolific Golden Horseshoe area of north-central British Columbia, Canada.

John Williamson, CEO commented, “The Cliff Creek Mid zone is now not only expanding at depth but also to the east with higher-grade gold and silver mineralization. The new gold-silver mineralization begins near surface and was previously unrecognized in this area. This type of near surface higher-grade mineralization will have a positive impact on the Preliminary Economic Analysis (PEA) by delivering early year’s material in the production schedule. Benchmark has planned additional diamond drilling to focus on expanding this zone.”

Similar to the recently announced discovery of shallow high-grade and bulk-tonnage mineralization in the connector zone (see October 6th press release) this discovery indicates a number of advantages:

These new results are defining strong continuity of gold and silver mineralization over 50 metres and the system remains open along strike. A number of new drill holes have been planned to follow-up on this zone looking to extend it along strike to the northwest and southeast. 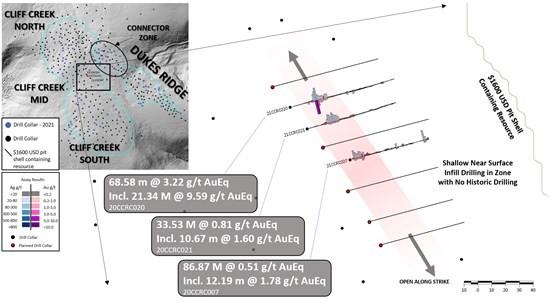 Results from samples were analyzed at ALS Global Laboratories (Geochemistry Division) in Vancouver, Canada (an ISO/IEC 17025:2017 accredited facility). The sampling program was undertaken by Company personnel under the direction of Rob L’Heureux, P.Geol. A secure chain of custody is maintained in transporting and storing of all samples. Gold was assayed using a fire assay with atomic emission spectrometry and gravimetric finish when required (+10 g/t Au). Analysis by four acid digestion with 48 element ICP-MS analysis was conducted on all samples with silver and base metal over- limits being re-analyzed by atomic absorption or emission spectrometry. Rock chip samples from outcrop/bedrock are selective by nature and may not be representative of the mineralization hosted on the project.

The technical content of this news release has been reviewed and approved by Michael Dufresne, M.Sc, P.Geol., P.Geo., a qualified person as defined by National Instrument 43-101.

Benchmark Metals Inc. is a Canadian based gold and silver company advancing its 100% owned Lawyer’s Gold-Silver Project located in the prolific Golden Horseshoe of northern British Columbia, Canada. The Project consists of three mineralized deposits that remain open for expansion, in addition to +20 new target areas along the 20 kilometre trend. The Company trades on the TSX Venture Exchange in Canada, the OTCQX Best Market in the United States, and the Tradegate Exchange in Europe. Benchmark is managed by proven resource sector professionals, who have a track record of advancing exploration projects from grassroots scenarios through to production.