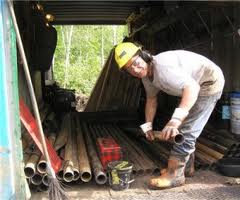 This news release reports the assay and geologic highlights from two drill holes completed during the winter/spring 2013 phase of Bayfield’s drill exploration program on the Burns Block property.

Bayfield has been actively extending a robust shoot of high-grade gold-silver mineralization extending from Rainy River Resources’ Intrepid gold-silver zone onto the eastern portion of the Burns Block to the southwest, since drilling discovery hole RR11-205 in late 2011.

Comparison of known location, geometry and geological-mineralogical characteristics of the mineralization being developed on either side of theBayfield Ventures– Rainy River Resources property line clearly indicates that the two companies are outlining and extending a single, remarkably continuous, large-scale mineralized shoot.

Exploration and delineation drilling byBayfield Venturesand Rainy River Resources has established that the Intrepid shoot is strongly mineralized from surface (bedrock/glacial till contact) to a current vertical depth of over 620 metres.  The known strike length is >700 metres and the NE-SW down plunge distance is now >1km.

These dimensions indicate that the Intrepid zone is the most vertically continuous mineralized structure discovered to date in the district.  Furthermore these dimensions, when combined with the documented presence of a high-grade core where grades of >10 grams gold over down hole widths of 10 to 25 metres are common, are leading to establishing the Intrepid as one of the most important mineralized zones found to date.

The high-grade gold-silver zone is strongly mineralized by irregular veinlets, fracture fills and clotty disseminations of dark brown sphalerite, galena, arsenopyrite and chalcopyrite. Sphalerite commonly forms 2% to 5% of mineralized intervals and assays results of >1% zinc are not uncommon.  Arsenopyrite rarely makes up more that 0.5% of mineralized intervals but its presence is very strongly correlated with the presence of gold grades >10 grams/tonne.

The host rock, alteration, base metal mineralization and style of precious metal mineralization have remained remarkably consistent from our late 2011 discovery hole RR11-205 on the east boundary adjoining Rainy River Resources ground to the current extension drilling area approximately 240 metres to the southwest.

Drill core analysis and assaying is being conducted by ACT Labs in Thunder Bay, Ont. The lab is ISO/IEC 17025:2005 (CAN-P-4E) certified. The drill core is split and sampled in standard 0.5 metre to 1.5 metre intervals. The core samples were analyzed for gold by 30-gm fire assay with AA finish and by gravimetric methods from assays over 5,000 ppb (over limit). Screened total metallic assays are being performed on samples assaying over 5,000 ppb. The core samples were analyzed for silver by Ag Aqua Regia-ICP finish and Ag Fire Assay-Gravimetric from assays over 100 ppm (over limit). The Company has implemented a quality assurance and quality control program to ensure that the sampling and analysis of all samples is conducted in accordance with the best possible practices.

Bayfield VenturesCorp. is exploring for gold and silver in the Rainy River District of north-westernOntario. The Company is fully funded to finish its planned 100,000 metre diamond drill program with drilling concentrated on the flagship Burns Block Project.