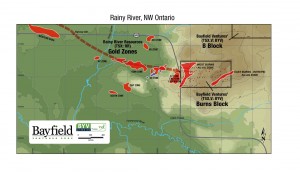 Bayfield Ventures Corp. (TSX-V: BYV) (OTC Pink: BYVVF) (Frankfurt: B4N) is pleased to announce additional assays from the continuing exploration of its 100% owned Burns Block and “B” Block gold-silver projects. The Company’s Burns and “B” Blocks are located in the Rainy River District of north-western Ontario and are ideally situated adjacent to the east of Rainy River Resources’ (TSX: RR) main multi-million ounce gold-silver deposit and to the west of their expanding Intrepid gold-silver zone.

This news release reports highlights from twelve drill holes completed during our ongoing 2013 drill exploration program on the Burns and “B” Block properties.  Drilling is continuing on the Burns Block.

The best of the three mineralized zones in RR13-7 is the central one that is the targeted main strand of the developing East Burns – Intrepid Zone. Gold-silver mineralization within this main 22.90 metre down hole interval is dominated by native gold fracture fills and associated pin point disseminations of native gold and electrum. These occurrences are found both in association with distinct cross cutting veins and veinlets and within more irregular shaped patches of strong silica flooding of a quartz eye dacite porphyry host rock.

The high-grade zone is also strongly mineralized by veinlets, fracture fills and clotty disseminations of dark red/brown sphalerite, galena, chalcopyrite and arsenopyrite. The host rock, alteration, base metal mineralization and style of precious metal mineralization have remained remarkably consistent from our late 2011 discovery hole, RR11-205, near the east boundary to the current extension drilling area approximately 220 metres to the southwest.

When combined with the 200+ metres of vertical extent of the mineralization discovered at East Burns to date, the apparent continuity of geologic characteristics and gold-silver assay results is highly encouraging and compares well with current descriptions of the deeper portions of Rainy Rivers’ Intrepid Zone, located immediately east of the Burns Block property boundary. Bayfield is continuing the drilling of the southwest extension area of the East Burns – Intrepid Zone.

Discussion of Six Drill Holes Completed on “B” Block Property:

The 480 acre “B” Block is positioned directly north of the near surface portion of Rainy River Resources’ Intrepid Zone. Published geologic mapping by the Ontario Division of Mines (Blackburn, 1971) combined with results of past drilling completed byBayfield Ventureshas clearly shown that the main Rainy River District gold-silver host rock, the Archean age quartz porphyry dacites, pass directly through the “B” Block property covering a strike length of approximately 1.5 kilometres on the “B” Block. Prior to the recent winter 2013 drill program on the property, a total of 23 holes had been completed, only seven of which passed below 250 metres in vertical depth.

The known geologic characteristics along with mineralized intervals returned from previous, wide spaced drilling at the “B” Block indicate excellent exploration potential of this 1.5 kilometre extension of the known Rainy River Gold District.

Drill Hole B13-1 intercepted two significant intervals of precious and base metal mineralization in a position approximately 45 metres northeast of the previously reported intercept in hole B12-6. These intervals are hosted by sericite-silica altered quartz porphyry dacites and are accompanied by poly metallic base metal mineralization very similar to lower grade mineralized intervals found in both the western and eastern portions of Bayfield’s Burns Block.

The lower contact of the lower and best developed mineralized zone in hole B13-1 is terminated by a gouged fault zone that appears to have offset the mineralization. Additional exploration drilling within the 1.5 kilometre long belt of foliated and altered dacites “B” Block is being planned. In particular, targeting is underway for a series of deeper holes designed to begin the exploration of the area down-dip of the low-grade but consistently mineralized zone indicated by the results of holes B12-6 and B13-1.

All Drilling Results from Burns Block & “B” Block Exploration:

Drill core analysis and assaying is being conducted by ACT Labs in Thunder Bay, Ont. The lab is ISO/IEC 17025:2005 (CAN-P-4E) certified. The drill core is split and sampled in standard 0.5 metre to 1.5 metre intervals. The core samples were analyzed for gold by 30-gm fire assay with AA finish and by gravimetric methods from assays over 5,000 ppb (over limit). Screened total metallic assays are being performed on samples assaying over 5,000 ppb. The core samples were analyzed for silver by Ag Aqua Regia-ICP finish and Ag Fire Assay-Gravimetric from assays over 100 ppm (over limit). The Company has implemented a quality assurance and quality control program to ensure that the sampling and analysis of all samples is conducted in accordance with the best possible practices.

Bayfield VenturesCorp. is exploring for gold and silver in the Rainy River District of north-westernOntario. The Company is fully funded to finish its planned 100,000 metre diamond drill program with drilling concentrated on the flagship Burns Block Project.