The Pen Zone is one of the three high-priority targets just north of the Project, along with the CARZ and Island zones (collectively referred to by Battle North as the “String of Pearls“). The Company has encountered high-grade mineralization in the String of Pearls from historical drilling (see Diagram 1) and is focussed on advancing exploration of the String of Pearls as potential sources of incremental mill feed. This year, the Company has completed approximately 2,100 metres of a 2,700 m drilling program at the Pen Zone. Battle North has conducted drilling from the 244 m Level exploration drift of the Project, targeting the high-titanium basaltic units which are the main host rock of gold mineralization in this zone. The information gathered from the 2020 Pen Zone drilling program is expected to further advance the Company’s understanding of the lithological and structural controls on the gold mineralization in the zone. Please see Tables 1 and 2 for the summary of the assay results from the 2020 Pen Zone confirmatory drilling program and drill hole coordinates, respectively.

Historical drilling at the Pen Zone demonstrated high-grade mineralization and initial assay results from the current drilling program appear to confirm those historical results. Current modelling of the Pen Zone High-Ti Basalt Units has this zone potentially extending at depth, which warrants further exploration drilling. Please see Diagrams 1 and 2 below for a plan view of the historical drilling from the String of Pearls and a section view of the 2020 Pen Zone drilling (with historical intercepts), respectively, and Tables 3 and 4 for the historical Pen Zone drill results and drill hole coordinates, respectively.

Battle North President and Chief Executive Officer George Ogilvie, P.Eng., stated, “With the Feasibility Study for the Bateman Gold Project on track to be completed in the second half of 2020, we began confirmatory drilling programs at the Pen Zone and McFinley zone with the goal of providing NI 43-101 mineral resource estimates from these zones, which are in close proximity to the Bateman Gold Project. Similar to the 2019 Preliminary Economic Assessment (“PEA“)3 for the Project, we anticipate that the Feasibility Study mine plan will not fully utilize the Project’s 1,800 tonne per day milling capacity, allowing room for incremental mill feed that could potentially be sourced from the String of Pearls and the McFinley Zone.”

“We had an encouraging start to the 2020 Pen Zone drilling program. The drill results appear to confirm historically identified areas of mineralization. More importantly, the drill results support the geological model that was produced from historical drill data in the targeted areas. Gold mineralization at the Pen Zone is mainly hosted in the High-Ti Basalt Unit, similar to the F2 Gold Zone at the Bateman Gold Project. This similarity is also encouraging from a mineralogy perspective and the possibility for the Project’s mill to process any potential mineralized material from the Pen Zone. We are in the early stages in understanding the potential extension of the High-Ti Basalt Units at the Pen Zone at depth, which warrants additional drilling.”

Today the Company filed a new technical report for the Project reflecting the Updated 2020 Mineral Resource Estimate, in accordance with the requirements of National Instrument 43-101 Standards of Disclosure for Mineral Projects. The Technical Report, effective May 5, 2020, was prepared by T. Maunula & Associates Consulting Inc., which is independent of Battle North. The Company issued a news release on July 8, 2020 announcing the Updated 2020 Mineral Resource Estimate, which is reflected in the Technical Report. A copy of the July 8, 2020 news release and the Technical Report can be viewed online under Battle North’s profile at www.sedar.com and on the Company’s website at www.battlenorthgold.com.

The content of this news release has been reviewed, verified, and approved by Michael Willett, P.Eng., Director of Projects for Battle North, and Isaac Oduro, P.Geo., Manager of Technical Services for Battle North, who are Qualified Persons as defined by National Instrument 43-101.

Underground drilling was conducted by Boart Longyear Drilling of Haileybury, Ontario and was supervised by the Battle North Gold exploration team. All assays reported are uncut unless otherwise stated. Samples reported herein were assayed by SGS Mineral Services of Red Lake, Ontario and Activation Laboratories Ltd., Dryden, Ontario, both of which are independent of Battle North. All NQ core assays reported were obtained by fire assay with AA-finish or using gravimetric finish for values over 10.0 g/t Au.

Intercepts cited do not necessarily represent true widths, unless otherwise noted, however drilling is generally intersecting interpreted mineralized zones at angles between -30o and +30o. True width determinations are estimated at 65-80% of the core length intervals for the 305 m Level drilling, and estimated at 75-95% of the core length for the 610 m and 685 m Level drilling. Battle North Gold’s quality control checks include insertion of blanks, standards and duplicates to ensure laboratory accuracy and precision.4

Battle North is a Canadian gold mine developer led by an accomplished management team with successful underground gold mine operations, finance, and capital markets experience. Battle North owns the significantly de-risked and shovel-ready Bateman Gold Project, located in the renowned Red Lake gold district in Ontario, Canada and controls the strategic and second largest exploration ground in the district. Battle North also owns a large gold exploration land package on the Long Canyon gold trend near the Nevada-Utah border in the United States. 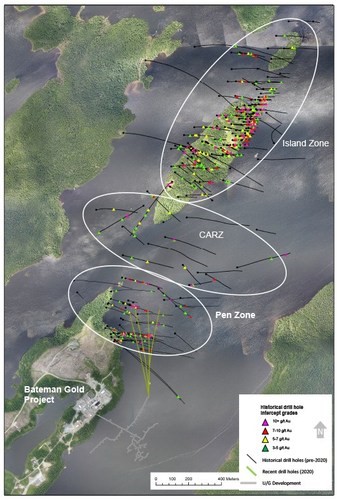 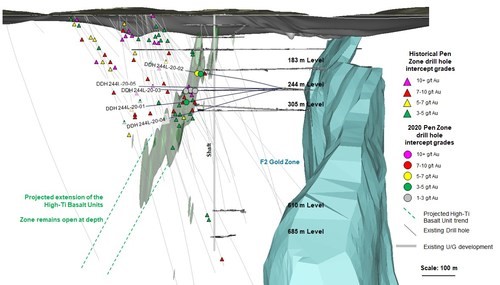