Barksdale Intercepts 105m of 0.63% Copper and 0.40 g/t Gold from its Initial Drill Program at San Javier

Barksdale Intercepts 105m of 0.63% Copper and 0.40 g/t Gold from its Initial Drill Program at San Javier 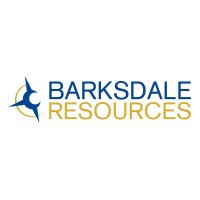 Initial results from recently completed core holes included within this release have been received from the Cerro Verde zone where the current drilling has tested gaps between historically intercepted mineralization. The first two holes intersected broad near surface zones of oxide copper and gold mineralization that included the following highlights:

Rick Trotman, President and CEO of Barksdale commented: “We are very thrilled by the initial results at San Javier, which confirm that the Cerro Verde zone contains thick zones of both copper and gold-bearing oxides at shallow depths. All 24 holes drilled to date from this program have intersected visual copper mineralization, at varying levels of intensity. We expect to announce additional drill assay results consistently over the remainder of 2021, and into early 2022, as additional batches of data are received from the labs.”

Drilling is currently ongoing at the Cerro Verde zone, located within the Company’s San Javier property package in Sonora, Mexico. To date, twenty-four diamond drill holes have been completed, including four PQ-sized (85mm diameter core) metallurgical holes (SJ21-01 thru SJ21-04), which are currently being processed by McClelland Laboratories, Inc. in Reno, Nevada as part of the Company’s metallurgical column testing program. The first 60.5 meters of hole SJ21-04 was a metallurgical interval (PQ-sized core), while the remainder of the drill hole was completed as HQ (63.5mm diameter core) in order to explore deeper expressions of the copper-gold mineralizing system. Aside from the four metallurgical holes, all remaining drill holes are HQ-sized core. Sample are shipped from site to Skyline Assayers & Laboratories’ facilities in Hermosillo, Mexico (sample preparation) and Tucson, Arizona (assaying). Barksdale currently has eleven holes submitted to Skyline labs with additional holes currently being logged and sampled at site by the San Javier project exploration team. Based on current turnaround times, Barksdale expects to receive additional batches of copper and gold assay data from the Phase I drilling campaign every few weeks for the remainder of 2021 and into early 2022. 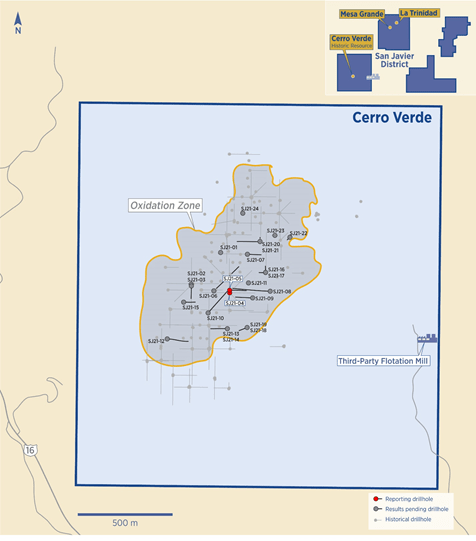 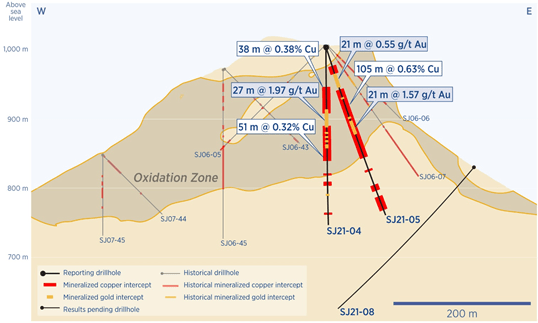 Thomas Simpson SVP of Exploration of Barksdale commented: “These results show excellent continuity with historic drilling. The copper mineralization targeted with this Phase I drill campaign is predominately oxide and testing to-date highlights good copper solubility. This shows that the copper mineralization encountered can likely be recovered with proven and economical heap leach technology.”

Drilling was completed using HQ size diamond drill core and core was logged by geologic consultants engaged by the Company. Drill holes were logged and marked for sampling prior to being sawn in half using a diamond blade saw, with one half of the sawn core being placed in a cloth sample bag, with a unique sample tag, while the second half was returned to the wooden core box for storage on site. Sample assays are being performed by Skyline Assayers & Laboratories, which is an accredited laboratory (ISO 9001). Core samples are analyzed for total copper, acid soluble copper, cyanide soluble cooper, as well as well as a multi element ICP Analysis.

The analytical work has been and is subject to a QA/QC program that includes certified reference standards from OREAS North America. These standards are of similar composition to the rock types at San Javier. Several different standards are included in each batch of samples submitted to the lab. These controls are tracked to ensure the integrity of the assay data. Results are all within acceptable limits.

Scientific and technical information in this news release has been reviewed and approved by Lewis Teal, Senior Consultant to the Company and a ‘Qualified Person’ as defined under Canadian National Instrument 43-101.

Barksdale Resources Corp. is a base metal exploration company headquartered in Vancouver, B.C., that is focused on the acquisition, exploration and advancement of highly prospective base metal projects in North America. Barksdale is currently advancing the Sunnyside copper-zinc-lead-silver and San Antonio copper projects, both of which are in the Patagonia mining district of southern Arizona, as well as the San Javier copper-gold project in central Sonora, Mexico.