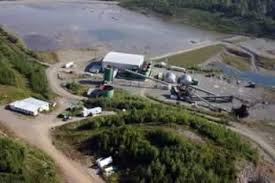 Chief Geologist Jim Yin, Ph.D., P. Geo., reports that Infill sampling of 250 diamond drill holes totalling 182,738.1 feet conducted on Cow Mountain in 2007, 2009, 2010 and 2011 were completed on January 8, 2014. Core cutters have cut 237 of 250 drill holes to date and the remaining 13 will be completed before the end of January. There are three core cutting rooms shared by two core cutting teams that have been working on cross shifts.

In total, 25,280 samples have been sent to AcmeLabs, of which approximately 5,400 reject and infill core samples have been analyzed with the other approximately 19,900 samples awaiting assaying. The lab has been tasked to finish all assaying by the end of February. The 25,280 samples include 1,565 soil and 1,154 channel samples from Island Mt. collected in 2013, in addition to more than 22,400 reject and infill core samples.

An update of the Cow Mt. drill hole database has been in progress as the new assay results from both reject and infill drill core samples are received. The database will be used to upgrade the Company’s existing NI 43-101 technical report on Cow Mt (see news release dated June 18, 2013).

A drill program to cover the mine grid north drill gap area of the proposed open pit on Cow Mt is being planned to help provide more solid data for the NI 43-101 technical report update.

Infrastructure work (haul roads in the pit) is almost complete in preparation for mine startup. A focus has been to keep the roads open throughout the winter in and around the Bonanza Ledge & Barkerville Mt, Cow Mt., the town of Wells and Island Mt.

Roads are also necessary to access water sample points as well as to access core and sample storage. The area has experienced heavy snowfall this year as well as strong winds, requiring above average Company resources in keeping control of the snow.

Infill core sampling of diamond drill holes conducted on Island Mt between 1999-2005 commenced on January 9, 2014, and includes 56 drill holes totalling 24,926 feet. This program is scheduled to be completed within two months. This will be followed by the re-logging of diamond drill holes conducted on Island Mt. in the 1970’s & 1980’s. Drill holes from the 1970’s & 1980’s were not historically sampled and as a result, the Company will log only those drill holes with collar survey results and solid hole identification, box numbers and footages. Further information will be released as total numbers and footages of these drill holes are calculated.

Available reject samples of Island Mt drill holes will be collected for metallic screen fire assays and QA/QC, in order to have better category of gold resources.

Mining contractor Roktek Services Inc. worked on raising the tailings dam until cold weather stopped work in December. Work will be completed in the spring. Roktek finished raising the North Dam to the target 1031.0 meter elevation. The Cross Dyke has also been raised to the 1031.0 m elevation on the western portion. The remainder of the Cross Dyke is at 1029.3 m elevation. Design work and site preparation has been completed on the new spillway location.

The majority of the mill restart maintenance and repairs have been completed. The assay lab is undergoing a renovation prior to the mill restart. Recruitment of mill personnel is ongoing.

The information contained in this news release has been reviewed and approved by the Company’s Chief Geologist Jim Yin, Ph.D., a Qualified Person as defined by National Instrument 43-101 Standards of Disclosure for Mineral Projects.

Since the mid-1990s the Company has focused on exploration and development of gold projects in the Cariboo Mining District in central B.C. The Company’s mineral tenures cover 1,164 km2 along a strike length of 60 km and approximate width of 20 km, including the Cariboo Gold Project, the Bonanza Ledge Gold Project, the Barkerville Mountain and Island Mountain exploration targets and seven past producing hard rock mines. The QR Property was acquired in February 2010 and includes a 900 tonne/day gold milling facility and a permitted gold mine located approximately 110 km by highway and all-weather road from the Barkerville Gold Camp. In November 2010, the Company acquired a second permitted mill currently on care and maintenance in Revelstoke, B.C. The Company has completed significant drilling and exploration programs and, together with the historical data, is compiling all information to determine the geologic models and updated technical reports to continue with exploration and development of the Cariboo Gold projects.