Banro Pours First Gold at Namoya Mine, Democratic Republic of the Congo

Banro Pours First Gold at Namoya Mine, Democratic Republic of the Congo 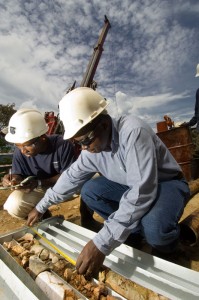 Banro Corporation (NYSE MKT:BAA) (TSX:BAA) is pleased to announce that its Namoya mine in the Democratic Republic of the Congo successfully began gold production with the pouring of the first 320 ounces on December 30, 2013 during the hot commissioning of the heap leach loaded carbon, elution and electrowinning operations. The completion of the building of the Namoya plant will continue in step with commissioning operations into Q1 2014. Commercial production is expected to be achieved before the end of Q2 1014. Namoya is Banro’s second gold mine to come into production in just over two years.

This is a significant and exciting milestone for Banro. Production at Namoya is scheduled to transform Banro from a one-mine company with less than 100,000 ounces of annual gold production to a two-mine company targeting more than 225,000 ounces of annual gold production. The start of production at Namoya is also a tremendous achievement for the DRC, clearly signifying that the DRC is a place to find, finance and successfully build new gold mines.

“We would like to thank our professional operations teams, business partners, consultants, regional governments and the local communities for assisting us in this significant achievement. We look forward to continued growth, new business opportunities and a long association with the DRC,” commented Dr. John Clarke, President and CEO.

The Namoya mine is Banro’s second gold mine on the Twangiza-Namoya gold belt, located approximately 210km southwest of Banro’s Twangiza gold mine which began production in October 2011. Namoya is an open pit mining operation with a hybrid gravity/Carbon in Leach (CIL) and heap leach extraction process.

Daniel K. Bansah, Head of Operations and Projects and a “qualified person” (as such term is defined in National Instrument 43-101), has reviewed and approved the technical information in this press release.

Banro Corporation is a Canadian gold mining company focused on production from the Twangiza mine, which began commercial production September 1, 2012, and completion of its second gold mine at Namoya, located approximately 210 kilometres southwest of the Twangiza gold mine. The Company’s longer term objectives include the development of two additional major, wholly-owned gold projects, Lugushwa and Kamituga. The four projects, each of which has a mining license, are located along the 210 kilometre long Twangiza-Namoya gold belt in the South Kivu and Maniema provinces of the Democratic Republic of the Congo. Led by a proven management team with extensive gold and African experience, the initial focus of the Company is on the mining of oxide material, which has a low capital intensity to develop but also attracts a lower technical and financial risk to the Company. All business activities are followed in a socially and environmentally responsible manner.