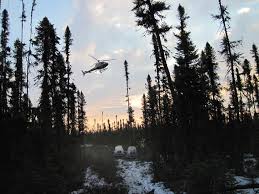 Balmoral Resources Ltd. (TSX: BAR) (OTCQX: BALMF)  announced today that drilling has resumed on the Company’s wholly owned Martiniere Gold Project located along the Detour Gold Trend in Central Quebec. Drilling at Martiniere will initially focus on further testing of the southern segment of the Bug Lake Gold Zone following the success of the winter 2014 drill program in this area. This will be followed by further testing/infill drilling of the northern segment of the Bug Lake Zone which returned numerous strong intercepts including 1,138 g/t gold over 4.38 metres in the most recently completed phase of drilling (see NR14-10; May 12, 2014).

“With drilling now underway at Martiniere our shareholders have results from two of the more exciting exploration projects in Canada to look forward to over the weeks and months ahead,” said Darin Wagner, President and CEO of Balmoral. “As well we have plans to drill test two or three new targets within our 700 square kilometre Detour Gold Trend Project this summer, including one of the most promising gold targets we have identified to date.”

Eight diamond drill holes have now been completed on the wholly owned Grasset Ni-Cu-PGE property to follow-up the discovery of high-grade nickel-copper-PGE mineralization within the Grasset Ultramafic Complex. Drill hole GR-14-25, the first hole to test Horizon 3 of the Complex, returned a 45.28 metre interval which graded 1.79% Ni, 0.19% Cu, 0.42 g/t Pt and 1.04 g/t Pd (see NR-14-11, May 20, 2014). The high-grade nickel-copper-PGE mineralization in hole GR-14-25 is associated with a broad zone of “net textured” sulphides surrounded by a broader halo of disseminated sulphide mineralization.

Samples from six of the first eight holes have now been delivered to ALS-Chemex in Val d’Or, Quebec for analysis. Initial results are expected within the next 4-5 weeks. An additional 4-5 holes are planned prior to a short break in drilling to allow for additional borehole geophysical work to be completed.