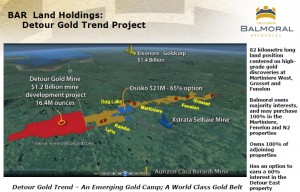 The initial phase of the summer drill program will focus on further delineation and expansion of several near surface, high-grade gold zones on the Martiniere Property, including those in the Bug Lake area (Hanging Wall, Bug Lake and Footwall Zones), Martiniere West area (West Zone and newly discovered West Zone Extensions) and recent discoveries in the Martiniere East area, (ME-11, ME-16 and ME-23 occurrences). The first target for expansion is in the Bug Lake area where vertical extensions of the high grade core of the Bug Lake Zone, Hanging Wall Zone and potential vertical extensions of the bonanza grade Footwall Zone are being targeted.

Pending completion and receipt of results from on-going geophysical and geochemical programs on the Martiniere Property, and elsewhere throughout the broader Detour Gold Trend Project, drill testing of several high-priority exploration targets is also planned as part of the Company’s on-going target generation program. As currently outlined, the summer drill program calls for a minimum of 12,000 metres of drilling to be completed.

“At a time when the gold business is in a state of flux, expanding, high-grade, near surface gold systems in stable political jurisdictions, like BAR’s Martiniere discoveries, should represent “go to” gold assets” said Darin Wagner, President and CEO of Balmoral. “We have successfully expanded this high-grade gold system, on multiple fronts, during each previous phase of drilling and look to continue further delineating the scale of the opportunity at Martiniere, and across the breadth of the Detour Gold Trend Project, with our current program.”

Mr. Darin Wagner (P.Geo.), President and CEO of the Company, is the non-independent qualified person for the technical disclosure contained in this news release. Mr. Wagner has supervised the work programs on the Martiniere Property, visited the property on multiple occasions, examined the drill cores from the majority of holes drilled to date on the Property, reviewed the results with the on-site project geologists and reviewed the available analytical and quality control results.

Balmoral is a Vancouver-based precious metal exploration and development company focused on delineation of a series of high-grade gold discoveries on its wholly owned Detour Gold Trend Project located in Quebec, Canada. With a philosophy of creating value through the drill bit and with a focus on proven productive precious metal belts, Balmoral is following an established formula with a goal of maximizing shareholder value through the discovery and definition of high-grade gold assets.