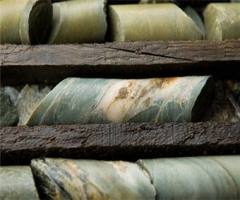 Balmoral Resources Ltd. (TSX: BAR) (OTCQX: BALMF) announced that it has completed the field component of its large-loop surface and borehole EM surveys on the Company’s Grasset Property and has resumed drill testing of the Grasset Ni-Cu-PGE discovery. This extensive zone of nickel-platinum-palladium (+/-copper) mineralization has been intersected over a 700 metre strike length in broadly spaced drilling and remains open in all directions. Balmoral announced the discovery of a high-grade massive sulphide portion of the system on March 4, 2014 with hole GR-14-17 returning 3.69% nickel, 0.23% copper, 1.23 g/t palladium and 0.53 g/t platinum over 1.46 metres within an 11.41 metre wide mineralized interval.

The Company has since completed borehole EM (down-hole electromagnetic survey) and large loop surface EM surveys in the discovery area in order to target the highly conductive, massive sulphide portions of this large system. Preliminary results from these surveys have outlined a number of high priority anomalies which exhibit characteristics similar to the massive sulphide intercept in hole GR-14-17, as well as providing additional information concerning the plunge/dip of the intercept in hole GR-14-17. The first of these anomalies to be targeted is located 440 metres NW of hole GR-14-17 (and 140 metres NW of hole GR-14-16) in an untested area along strike from the known zone of mineralization. This anomaly demonstrates strong conductivity, considerable strike/depth extent and appears to be located at/near the base of the host ultramafic intrusion, the most favourable location for development of massive sulphides within the system. This will be followed by additional testing in the GR-14-17 area and of other conductivity targets once the final geophysical model for that area has been received.

The Company has added a new presentation to its website – www.balmoralresources.com – which discusses the Grasset Ni-Cu-PGE discovery and initial geophysical results in more detail. The wholly owned Grasset Property is part of the Company’s Detour Gold Trend Project. The Grasset Ni-Cu-PGE discovery is located approximately 40 km east of Balmoral’s high-grade Martiniere gold system. The discovery is accessible via an established logging road network from the Company’s Fenelon base camp 3.5 km to the west. Final results from holes GR-14-18, – 19 and -20 remain pending and are expected within the next 2-3 weeks.

The Company has been completed 20 drill holes on its Martiniere Property targeting the Bug Lake Gold Zones. These include both in-fill and expansion holes in both the northern and southern Bug Lake domains. Drilling is on-going and anticipated to continue over the next two to three weeks. Initial drill results are expected within the next 3-4 weeks.