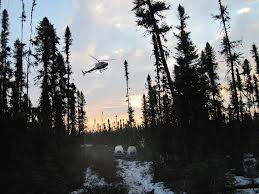 Results from four widely spaced holes drilled to the southwest along projected strike from the high-grade Martiniere West Zone, encountered similar high-grade gold mineralization up to 510 metres along strike from the previously known southwest margin of the West Zone. High-grade gold intercepts have now been reported for over 850 metres along this structural trend, from the northeastern margin of the West Zone to the southwestern-most hole drilled to date (MDX-13-17a). These results also increase the known extent of the Martiniere gold system, which includes the West, Central, ME-16 and Bug Lake area Zones, to approximately 2,000 metres in a northeast-southwest direction (See Figure below) and it remains open-ended. Results were highlighted by an intercept of 6.71 g/t gold over 7.40 metres (including 12.28 g/t gold over 2.45 metres) in hole MDX-13-13, and hole MDX-13-17a which returned two separate high grade intercepts of 10.67 g/t gold over 2.45 metres and 8.19 g/t gold over 2.22 metres.

“More than doubling the known extent of West Zone style mineralization and having a very high rate of success with such widely spaced, first pass drill holes in this type of high-grade gold system further reinforces the scale and upside potential at Martiniere” said Darin Wagner, President and CEO of Balmoral Resources. “While it’s too early to suggest continuity of these new intercepts with the more extensively drilled West Zone it’s clear that the gold-bearing system remains strong well outside our previous drilling and that there is now potential to develop near surface, high-grade gold resources over a significantly expanded strike length.”

(i) Reported drill intercepts are not true widths. At this time there is insufficient data with respect to the shape of the mineralization to calculate true orientations in space.

The high-grade gold intercepts in holes MDX-13-11, 13, 15 and 17 all occur along the projected strike of the West Zone. The gold mineralization in each hole is hosted within zones of weak to moderate shearing located within the same gabbroic intrusion as the West Zone. Anomalous to high-grade gold values within the sheared gabbro occur in association with moderate to strong silica flooding, quartz +/- carbonate veining and areas of increased (3-10%) sulphide (primarily pyrite) mineralization. All of these characteristics are in keeping with the known mineralization in the West Zone. The host gabbro body can be traced in geophysical data for an additional 500 metres to the southwest were it is anticipated to intersect the regional scale Sunday Lake Deformation Zone which hosts the multi-million ounce Detour Gold deposit 45 kilometres to the west. This area remains untested.

Four additional holes, MDX-13-8 to 10 and 12, tested a geochemical anomaly 300+ metres west of the holes reported above, on the west side of the Martiniere gabbro complex. These holes intersected a number of zones of alteration and veining but no significant gold mineralization. Hole MDX-13-14 tested an isolated geochemical anomaly located east of the projected strike of the West Zone trend and north of the Sunday Lake Deformation Zone intersecting weakly anomalous gold mineralization over narrow intervals associated with quartz-carbonate veining. Final results from holes MDX-13-16 and MDX-13-18, which tested a geochemical anomaly located two kilometres to the southwest along the Sunday Lake Deformation Zone remain pending.

Drilling continues with two drills on site at Martiniere. One is currently conducting expansion drilling in the immediate vicinity of the West Zone and the second is testing for shallow, along strike extensions of the Bug Lake Zone. Additional drilling in the area of the discoveries reported today is currently being planned. To date 30 drillholes, totaling 7,700 metres, have been completed since the Winter 2013 program was initiated in January. The Winter 2013 and planned Summer 2013 drill programs on the Detour Gold Trend project are fully funded.

Mr. Darin Wagner (P.Geo.), President and CEO of the Company, is the non-independent qualified person for the technical disclosure contained in this news release. Mr. Wagner has supervised the work programs on the Martiniere Property, visited the property on multiple occasions, examined the drill core and/or photographs from the holes summarized in this release, discussed, reviewed the results with senior on-site geological staff and reviewed the available analytical and quality control results.

Balmoral has implemented a quality control program for all of its drill programs, to ensure best practice in the sampling and analysis of the drill core, which includes the insertion of blind blanks, duplicates and certified standards into sample stream. NQ sized drill core is saw cut with half of the drill core sampled at intervals based on geological criteria including lithology, visual mineralization and alteration. The remaining half of the core is stored on-site at the Company’s Martiniere field camp in Central Quebec. Drill core samples are transported in sealed bags to ALS Minerals Val d’Or, Quebec analytical facilities. Gold analyses are obtained via industry standard fire assay with atomic absorption finish using 30 g aliquots. For samples returning greater than 5.00 g/t gold follow-up fire assay analysis with a gravimetric finish is completed. The Company has also requested that any samples returning greater than 10.00 g/t gold undergo screen metallic fire assay. Following receipt of assays visual analysis of mineralized intercepts is conducted and additional analysis may be requested. ALS Minerals is ISO 9001:2008 certified and the Val d’Or facilities are ISO 17025 certified for gold analysis.