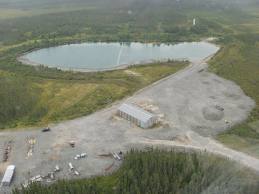 The net-textured sulphide zone in hole GR-14-25 is the shallowest of three sulphide mineralized intercepts observed in this hole. Holes GR-14-22 and GR-14-23, collared 260 metres northwest of GR-14- 25, each cut two intervals of disseminated to “blebby” pyrrhotite-pentlandite-chalcopyrite mineralization. The Company currently interprets these observations to indicate the presence of multiple, “stacked,” sulphide mineralized horizons within the host Grasset ultramafic complex. The upper sulphide zone in hole GR-14-25 hosts the most intense sulphide mineralization observed to date. Holes GR-14-22 and GR-14-23 extend the strike extent of the mineralized system to 840 metres. It remains open along strike to the northwest, to depth in all directions and potentially to the southwest (see Figure 1 and Figure 2 ).

The Company has received final assay results from holes GR-14-16 to GR-14-21, completed during the first phase of 2014 winter drilling program at Grasset. Hole GR-14-16 intersected a very broad Ni-Cu-PGE mineralized zone, returning 0.38% nickel, 0.03% copper, 0.06 g/t platinum and 0.13 g/t palladium over 65.15 metres. This includes a previously reported, higher grade basal intercept of 16.27 metres grading 0.55% nickel, 0.06% copper, 0.10 g/t platinum and 0.23 g/t palladium (see NR14-07; March 5, 2014). This intercept is related to 1 to 5% fine-grained, disseminated pyrrhotite-pentlandite-chalcopyrite mineralization. By comparison the net textured sulphide interval in hole GR-14-25 ranges from 3% to 100% sulphide. Readers are cautioned that it remains too early to draw correlations between the percentage of sulphide in the Grasset system, the percentage of sulphide minerals in previously completed holes and the grades of nickel, copper, platinum and palladium reported to date. Multiple factors, aside from sulphide percentages, can have a significant impact on final assay grades. The receipt of final assays also extends the mineralized halo around the high-grade massive sulphide intercept in hole GR-14-17 to 15.17 metres from 11.47 metres as previously reported (see Table 1, below).

All intercepts reported are down hole lengths, not true thicknesses. Insufficient drilling has been completed to date to define the orientation of the mineralized zone in space
** previously released – see NR14-07, March 5, 2014

Holes GR-14-17, 18, 19 and 24 are drilled on section, in and around the previously reported massive sulphide intercept in GR-14-17. All four holes intersected anomalous Ni-Cu-PGE mineralization and show evidence of local faulting/deformation and some evidence of local sulphide remobilization not seen in the intercepts to the northwest (holes GR-14-16, 22, 23 and 25).

* All intercepts reported are down hole lengths, not true thicknesses. Insufficient drilling has been completed to date to define the orientation of the mineralized zone in space
** Collared outside Grasset grid to test Grasset Gold Zone

Drilling at Grasset has been suspended for break-up and is due to re-commence, as ground conditions permit, once assay and follow-up geophysical results have been received. Balmoral is also in the process of finalizing plans to complete detailed airborne geophysical testing of the entire 16 kilometre length of the Grasset ultramafic complex controlled by the Company. This will include surveying an area of known nickel-copper-PGE occurrences located within the complex 8 kilometres northwest of the Grasset discovery.

Balmoral is a Canadian-based precious metal exploration and development company focused on high- grade gold discoveries along the Detour Gold Trend in Quebec, Canada. With a philosophy of creating value through the drill bit and with a focus on proven productive precious metal belts, Balmoral is following an established formula with a goal of maximizing shareholder value through discovery and definition of high-grade, Canadian gold assets.