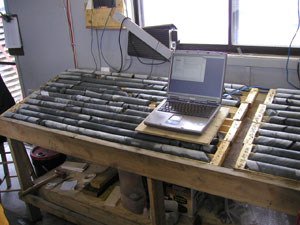 Balmoral Resources Ltd. (TSX: BAR) (OTCQX: BALMF) today confirmed the presence of an extensive zone of nickel-platinum-palladium (+/-copper) mineralization on its wholly owned Grasset Property in Quebec. Results include the first massive sulphide intercept from the property, located at the core of an 11.41 metre mineralized interval, which returned 3.69% nickel, 0.23% copper, 1.23 g/t palladium and 0.53 g/t platinum over 1.46 metres. Ni-Cu-PGE mineralization has now been intersected for over 700 metres along strike in a northwest direction from discovery hole GR-12-09. The mineralized zone remains open in all directions. The Grasset Property is part of the Company’s Detour Gold Trend Project. The Grasset Ni-Cu-PGE discovery is located approximately 40 km east of Balmoral’s flagship, high-grade Martiniere gold system where drilling is on-going.

“Our first two holes have taken the Grasset Ni-Cu-PGE target from an exploration concept, to a 700 metre long open-ended discovery capable of producing high-grade massive sulphide mineralization,” said Darin Wagner, President and CEO of Balmoral. “This discovery continues to outline the exploration upside of our expansive Detour Trend Project and provides another potential value driver behind the expanding high-grade gold system at Martiniere.”

Drill hole GR-14-16 was collared approximately 700 metres northwest of the discovery intercept in hole GR-12-09 and intersected disseminated pyrrhotite-pentlandite-chalcopyrite at the base of the ultramafic sequence. GR-14-17 was collared between the two holes, approximately 400 metres northwest of the discovery intercept. It intersected an 11.41 metre wide mineralized interval consisting of disseminated to semi-massive sulphides, cored by 1.46 metres of massive pyrrhotite and pendlandite (see photos at www.balmoralresources.com). Intervals from holes GR-14-16 and GR-14-17 which displayed abundant visible pentlandite (nickel sulphide) were “rush” assayed. Assay results from the remainder of these two holes are pending.

The ultramafic intrusive suite which hosts the new discovery can be traced in regional magnetic data for approximately 16 kilometres across the Grasset and adjacent Fenelon properties. Similar Ni-Cu-PGE mineralization is known to occur at the base of the same intrusive suite 8,300 metres northwest of the Grasset discovery suggesting potential for a laterally extensive mineralized system.

As the massive sulphide (highest grade) portions of the system are strongly conductive drilling has been temporarily suspended while down-the-hole and surface EM surveys are completed to assist with future drill targeting. Initial geophysical results have identified a number of priority conductive targets and drilling is anticipated to resume within the next two weeks.