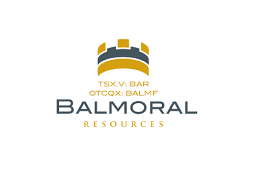 Drilling focused on infill and expansion of the known gold zones across a 225 long x 150 metre deep section of the 1,200 metre long x 400 metre deep, open ended Bug Lake Gold Trend. Today’s results continue to demonstrate the continuity of high-grade gold mineralization within the numerous zones located along the north-south oriented Bug Lake Gold Trend, and in particular the very high-grade nature of the Footwall and Hanging Wall Zones (see Figures 1, 2 and 3).

“We are pleased to see our initial winter assays meet, or in several cases exceed, results from our previous work in this portion of the Bug Lake Gold Trend and pleasantly surprised with the identification of high-grade base metal sulphides potentially associated with the Martiniere East VMS system” said Darin Wagner, President and CEO of Balmoral Resources.

Drilling also intersected a 2.10 metre interval of high-grade copper-zinc-silver-gold mineralization which, while incorporated into the later Bug Lake mineralized system, is interpreted to be associated with the adjacent Martiniere East VMS system. Hole MDE-15-172 intersected 2.10 metres grading 1.52% Cu, 4.20% Zn, 29.44 g/t Ag and 2.79 g/t Au from a semi-massive sulphide interval incorporated into a brecciated phase of the Upper Bug Lake Gold Zone. The metal suite and associated trace elements are atypical of the Bug Lake Gold Trend and of clear VMS affinity. They would represent by far the strongest base metal results to date from the Martiniere East area. Today’s intercept provides a positive indication that the Martiniere East VMS system, and by inference VMS systems within the broader Detour Trend land package which have not been a primary focus of exploration targeting, are capable of producing base metal grades of economic interest similar to those observed in the nearby Selbaie and Mattagami camps.

Results from an additional 21 holes completed during the winter program remain pending. Additional infill and expansion drilling along the Bug Lake Gold Trend will resume in the second or third quarter of 2015, as will testing of additional gold and VMS targets throughout the Martiniere Property.