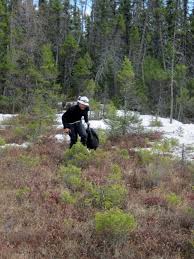 Balmoral Resources Ltd. (TSX: BAR) (OTCQX: BALMF) reported today that over 50 discrete electromagnetic conductors have been outlined along the interpreted trend on the Grasset Ultramafic Complex which hosts the Company’s recent Grasset nickel-copper-PGE discovery. Of the 50+ conductors outlined over half are spatially associated with strongly magnetic rocks — a setting analogous to the Grasset discovery located at the extreme southeastern end of the GUC.

The airborne survey was completed by Geotech Ltd. utilizing their “VTEM Plus” low level, high resolution, helicopter-borne magnetic and electromagnetic system. In addition to the Grasset Trend a number of other areas of the Detour Gold Trend Project were surveyed. Standard line spacing for the survey was 100 metres, with the Grasset discovery area flown at 50 metre line spacing to allow better characterization of the known mineralization. Over 1,250 anomalous EM responses (or “picks”) were identified by the survey with each anomaly typically comprised of several picks. The EM anomalies outlined along the Grasset Trend display a wide range of intensities and extend from approximately 100 to over 2,000 metres in strike length.

In the discovery area an isolated, moderate strength EM anomaly, associated with the magnetic high marking the GUC, was outlined over the massive nickel sulphide interval reported previously from hole GR-14-17. However, as anticipated from surface surveys and geophysical tests performed on the drill core, no EM response was evident over the bulk of the Grasset Ni-Cu-PGE zone which is comprised dominantly of net-textured to heavily disseminated nickel sulphide mineralization. Other semi-massive to massive sulphide and graphite bearing units in the footwall to the GUC produced weaker EM anomalies. Massive to semi-massive nickel sulphide mineralization typically produces a moderate to very strong EM response, while disseminated sulphide mineralization, where the sulphide grains are not physically connected to each other, do not typically produce an EM response, consistent with the results for the survey.

“Our summer airborne survey has confirmed a very target rich geological environment, for over 20 kilometres, along the projected strike extent of the GUC” said Darin Wagner, President and CEO of Balmoral. “Individual targets are currently being evaluated and will be prioritized for drill testing. We anticipate resumption of drilling on the Grasset Ni-Cu-PGE discovery in mid-January and initial testing of priority targets generated by the airborne survey to follow and form part of the winter 2015 Grasset program.”

In addition to Ni-Cu-PGE mineralization, the airborne data will assist the Company in evaluating the potential for zinc-copper-silver-gold VMS mineralization similar to the deposits in the nearby Selbaie and Mattagami districts. These deposits are typically associated with weak to moderate, short strike length conductors, with or without associated magnetic anomalies. As well, it will assist the Company’s on-going gold exploration activities. Both of the Company’s Fenelon and Martiniere gold zones, and the large Detour Gold deposit located to the west, were discovered while testing airborne EM anomalies.

Final results from the summer-fall Grasset (8 holes) and Lac Hugo (6 holes) drill programs are expected prior to year end and drilling will resume on the Detour Trend Project in early 2015.

Balmoral is a well-funded, Canadian-based discovery company focused on high-grade gold and nickel discoveries on its wholly owned, 700+ square kilometre Detour Trend Project in Quebec, Canada. With a philosophy of creating value through the drill bit and a focus on proven productive precious/base metal belts, Balmoral is following an established formula with a goal of maximizing shareholder value through discovery and definition of high-grade, Canadian gold and base metal assets.