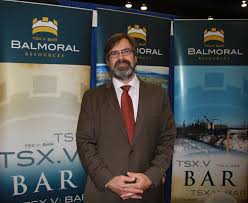 “The discovery of high-grade, quartz-vein hosted, gold mineralization in two locations over 2,500 metres apart along the new northern deformation corridor opens up yet another avenue for gold exploration in the Martiniere area” said Darin Wagner, President and CEO of Balmoral. “It also provides important information concerning the structural architecture of the Martiniere area and highlights a number of additional target areas that have never seen a drill bit.”

Drill holes MDE-14-153 to MDE-14-156 and MDE-14-163 to MDE-14-165 tested the northern extension of the Bug Lake Fault Zone with holes 155, 156 and 163 to 165 testing a north-west trending portion of the Bug Lake Trend. These latter holes extend the Trend by approximately 250 metres to the intersection with a newly defined east-west trending deformation zone. This newly intersected deformation zone hosts localized quartz+/-carbonate veining cutting variably deformed mafic volcanic and felsic intrusive rocks. A 0.63 metre interval of quartz veining within this corridor returned 15.35 g/t gold. A similar interval of quartz veining located along the projection of this same deformation zone 2,500 metres to the west returned 25.50 g/t gold over 0.43 metres in hole MDX-14-46.