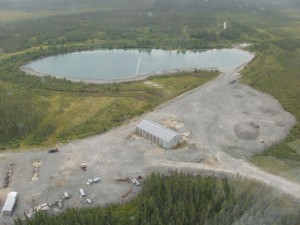 Balmoral Resources Ltd. (TSX: BAR) (OTCQX: BALMF) today confirmed the discovery of high-grade nickel-copper-PGE mineralization associated with the previously highlighted net textured sulphide zone in hole GR-14-25. The net textured zone, one of four mineralized intervals in the hole, returned a near surface intercept of 1.79% nickel, 0.19% copper, 0.42 g/t platinum and 1.04 g/t palladium over 45.28 metres. This high-grade interval is capped by, and includes, 1.11 metres of massive to semi-massive sulphide which returned 10.60% Ni, 0.45% Cu, 2.04 g/t Pt and 5.23 g/t Pd, confirming the potential for very high grade nickel and PGE values within the system (see table below).

Hole GR-14-25 is the first hole on the property to intersect Horizon 3 of the Grasset Ultramafic Complex (see Figure 1 and Figure 2). This newly discovered, sulphide rich horizon is open in all directions and sits approximately 100 metres southwest of, and stratigraphically above, two other vertically oriented Ni-Cu-PGE mineralized horizons within the southern-most portion of this sparsely tested, up to 16 kilometre long, ultramafic sill complex.

The 45.28 metre net-textured interval in GR-14-25 exhibits excellent internal continuity and uniformly exhibits strong nickel and PGE grades (See Figure 3). Today’s results also confirm the presence of nickel-copper-PGE mineralization for over 840 metres laterally, and 300 metres vertically, along Horizon 1; and for over 540 metres laterally and 240 metres vertically along Horizon 2. The first test of Horizon 3 was hole GR-14-25 which intersected the high-grade mineralized zone at less than 100 metres vertical depth. All three mineralized horizons remain open in all directions, save Horizon 1 which appears to be terminated by the Sunday Lake Deformation Zone to the south. Massive nickel-copper-PGE bearing sulphides have been intersected along both Horizon 1 and Horizon 3 in the limited (10 holes) drilling completed to date.

The host Grasset Ultramafic Complex is interpreted to stretch for 16 kilometres across Balmoral’s wholly owned Grasset and Fenelon Properties. It has seen only limited drilling, focused primarily in an area 8.3 kilometres northwest of the current discovery. Similar nickel-copper-PGE sulphide mineralization is known to occur in this area, suggesting significant potential for additional discoveries along the length of the Complex.

Recently received thin section analyses (see www.balmoralresources.com) indicate the presence of abundant pyrrhotite and pentlandite, with lesser chalcopyrite, magnetite (after chromite), pyrite and millerite (the latter a nickel sulphide with strong nickel tenure) within the high-grade, net textured zone. Pentlandite, which appears to host the bulk of the nickel mineralization, occurs as isolated mineral grains which the Company believes to be favourable from a metallurgical viewpoint.

The Company anticipates that drilling and geophysical work on the Grasset Property will resume, ground conditions permitting, in mid-June, followed shortly thereafter by the resumption of drilling on Balmoral’s Martiniere high-grade gold property 40 kilometres to the west.

“The broad, high-grade nature of the Grasset Ni-Cu-PGE discovery provides Balmoral with a second exciting, near-term growth opportunity in Quebec” said Darin Wagner, President and CEO of Balmoral Resources. “With recent price increases demonstrating the sensitivity of the nickel market to political uncertainties in major producing regions, the lack of new nickel discoveries globally over the past several years, the strength of the grades, wide nature of the intercepts, significant PGE content and apparent scale of the mineralized system, the Grasset discovery would appear to position the Company to attract significant interest from investors in both the precious and base metal sectors.”