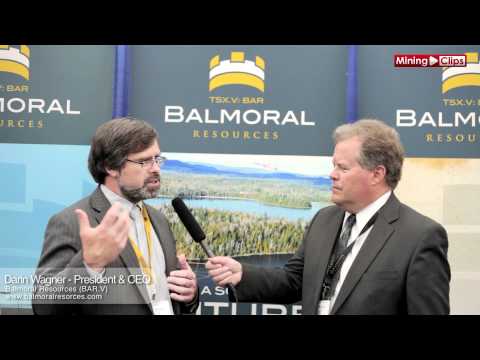 Balmoral Resources Ltd. (TSX VENTURE:BAR)(OTCQX:BALMF) reported that the Company has completed the acquisition of a 100% interest in each of the Martiniere, Fenelon and N2 Properties in Quebec. The Martiniere and Fenelon Properties form part of the Company’s Detour Gold Trend Project. The N2 Property is located approximately 80 kilometres to the southeast, adjacent to the currently producing Vezza gold deposit.

The Company also reported that it has completed the previously announced (see NR12-33, Nov. 22, 2012) acquisition of the Detour East Property, which also forms part of the Detour Trend Gold Project. Balmoral now owns 100% of its entire 64,893 hectare Detour Gold Trend Project, with the exception of 18 claims (998 hectares) which are held under a participatory joint venture with Encana Ltd. in which the Company holds a majority interest and is the operator.

“The completion of these two acquisitions result in a wholly owned land package covering nearly 65,000 hectares of some of the most prospective gold exploration terrain in the Abitibi greenstone belt,” said Darin Wagner, President and CEO of Balmoral Resources. “With rapidly expanding high-grade gold discoveries at Martiniere, historic gold resources and/or open-ended, advanced gold prospects on each of the other properties acquired, today’s acquisitions set the stage for the next phase of Balmoral’s growth. With our neighbours set to commence production on one of the largest open pit gold mines in North America, the recent acquisition of Trelawney and Queenston Mining and yesterday’s bid for Aurizon Mines, whose lead asset is only 45 kilometres south of our Martiniere discoveries, there is a great deal of attention and interest focused on the Abitibi making it an ideal time to consolidate our position and work aggressively toward expanding our asset base.”

Balmoral has exercised its rights under the terms of a pre-existing acquisition agreement (see NR10-05, Sept. 7, 2010) and purchased from Cyprus Canada Inc. (“Cyprus”) all of Cyprus’s rights, titles and interests to each of the Martiniere, Fenelon and N2 properties and a regional airborne data survey covering a large area of the northern Abitibi region of Quebec. Balmoral completed the purchase by making a single cash payment to Cyprus of US$450,000. As a result, Balmoral now owns a 100% interest in each of the subject properties and the airborne data set.

As per the terms of the acquisition agreement, Balmoral has granted to Cyprus a 2% Net Smelter Return (“NSR”) royalty on the majority of the claims comprising the Martiniere Property and a 1% NSR royalty on the entirety of each of the N2 and Fenelon Properties.

The Company also advises that it has completed the acquisition of the 49% interest in the Detour East Property previously held by Radisson Mining Resources Inc. as per the terms of the agreement announced on November 22, 2012. The Detour East Property adjoins the holdings of Detour Gold and sits along the same geological structure as that which hosts the Detour Gold deposit which is scheduled to become Canada’s largest gold producer over the next 12 months.