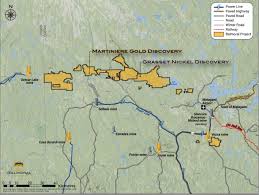 Balmoral Resources Ltd. (TSX:BAR) (OTCQX BALMF) announced today that its 2017 drilling program is now underway with the primary focus being the continued expansion and delineation of the Bug Lake gold deposits and other recent high-grade, near surface gold discoveries on its Martiniere Property, part of the Detour Gold Trend Project, in Quebec. It is anticipated that a minimum of 25,000 metres of drilling will be completed this year along the Bug Lake Gold Trend, with expansion of the size of the program as the year progresses being a strong possibility given the excellent results from the fall 2016 program.

“Our summer/fall 2016 drill program more than doubled the known footprint of the Bug South and Bug Lower Steep gold deposits and continued to extend the Bug North deposit down-plunge,” said Darin Wagner, President and CEO of Balmoral. “Those results included some of the broadest gold mineralized intercepts from the property to date from our expansion drilling of the Bug South deposit, which is the initial focus of drilling this winter.”

The Bug South gold deposit (see Figure 1) is one of three deposits now recognized along the length of the Bug Lake Gold Trend located central to the Martiniere Property. The summer/fall program led to the identification of a broad central core to the Bug South deposit located at depths of less than 275 vertical metres and highlighted by intercepts of:

Drilling will also target the rapidly expanding Bug Lower Steep gold deposit which has now been intersected for over 850 metres down-plunge and which, like the Bug South deposit, remains open to depth and down-plunge. The sparsely drilled Lower Steep deposit has demonstrated excellent potential to rapidly add to the overall potential of the gold system at Martiniere.

The current winter drill program will also follow-up on three high grade, near surface gold discoveries made during the fall program. The first of these three targets, the 221 Zone, has already been intersected in several holes and occurs in the hanging wall to the Bug South Deposit. The discovery intercept of 26.90 metres grading 4.51 g/t gold included two higher grade sub-intervals grading 15.89 g/t gold over 2.80 metres and 10.89 g/t gold over 6.80 metres (see NR16-20).

The other two new discoveries occur approximately 300 metres to the east of the Bug Lake Gold Trend. The first, from hole BLD-16-03, returned 5.80 metres grading 10.51 g/t gold (see NR17-01). The second discovery is located approximately 1,000 metres to the south and returned 11.58 metres grading 6.25 g/t gold (see NR17-03). Both intercepts occur at depths of less than 100 vertical metres and are open in all directions. This area, 300-500 metres east of the Bug Lake Trend, is virtually untested and based on the recent intersections appears to have good potential to add meaningful zones of gold mineralization in the near surface to the project.

The north-south oriented Bug Lake Gold Trend is located between two east-west trending deformation/fault zones, the Sunday Lake Deformation Zone to the south, host to the large Detour Lake gold mine located 45 kilometres to the west, and the sub-parallel Finger Lake fault corridor to the north. The Finger Lake fault corridor was first identified by Balmoral in late 2014.

Limited drill testing along the Finger Lake fault corridor during the 2016 summer/fall drill program successfully extended the known gold mineralization along the corridor with an intercept of 1.28 g/t gold over 7.18 metres (43.27-50.45 metres downhole) including a higher grade core of 3.46 g/t gold over 2.37 metres in hole MDX-16-55. A second zone of weaker deformation and quartz-tourmaline veining occurs directly below (56.93-73.47 metres) and returned anomalous gold mineralization grading 0.17 g/t gold over 16.54 metres.

MDX-16-55 is the westernmost hole drilled to date along the Finger Lake corridor. Three holes across 750 metres of this structure have now all successfully intersected gold mineralization of a similar nature (see Figure 2) which is open in all directions.

“We continue to be very intrigued by the evolving potential along the Finger Lake fault system,” said Mr. Wagner “The style of mineralization suggests a favourable environment which has been tested by only 3 holes to date, is open in all directions, and which has shown evidence for good gold grades and thicknesses. Additional testing is currently being planned for the summer 2017 season.”

Balmoral is a well-funded, Canadian-based company actively delineating and expanding a series of high-grade gold deposits on its Martiniere Property located within the prolific Abitibi greenstone belts in Quebec, Canada. The Martiniere Property is just one of several large, highly prospective properties comprising the Company’s wholly owned, 1,000 km2 Detour Gold Trend Project. Employing an aggressive, drill focused exploration style in one of the world’s preeminent mining jurisdictions, Balmoral is following an established formula with a goal of maximizing shareholder value through discovery and definition of high-grade, Canadian gold and base metal assets.