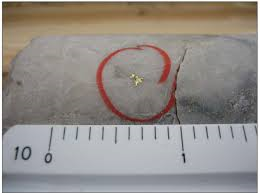 “The successful results from the fall exploration program continue to demonstrate the extensive nature of the gold mineralized system in the Martiniere area” said Darin Wagner, President and CEO of Balmoral. “The emergence of a new VMS system is a pleasant bonus, further confirming the potential for base metal discoveries in the belt and the effectiveness of the exploration tools being employed by our team throughout the 600+ square kilometre Detour Gold Trend Project”.

As previously announced, drill hole MDX-13-26, the first exploration hole of the fall program, intersected near surface, high-grade gold mineralization returning 5.59 g/t gold over 2.30 metres between down-hole depths 63.93 and 66.70 metres. This new gold occurrence occurs at the sheared contact between a quartz porphyry intrusion and mafic volcanic rocks. It is located along the eastern flank of a large area of anomalous chargeability responses centered east and south of the heart of the Bug Lake Zone (see NR13-21, Sept. 5, 2013). Follow-up drilling will test for extensions of this mineralization to the north and south along the interpreted strike of the quartz porphyry. The map which shows the location of this hole and the others described in the release can be viewed at www.balmoralresources.com.

Holes MDX-13-29 and 30 tested the central portion of this chargeability anomaly. Both holes intersected a broad zone of shearing and silica-sericite alteration. Anomalous gold mineralization is associated with the silica-sericite alteration as elsewhere on the property. Results were highlighted by an intercept of 0.34 g/t gold over 27.87 metres (67.51 to 95.38 metres down hole), including 11.50 g/t gold over 0.61 metres (83.46-84.07), in the deeper of the two holes – MDX-13-30. These holes were drilled west to east across the central portion of the chargeability anomaly. The anomaly extends, and is untested, for several hundred metres to the north and south.

Hole MDX-13-36 was collared approximately 500 metres southwest of the West Zone and 100 metres along strike to the west from holes MDW-11-12 and MDW-11-13. The MDW-11 series holes had intersected narrow intercepts of high-grade gold mineralization. A similar zone was intersected in hole MDX-13-36 and returned an anomalous gold intercept of 1.14 g/t gold over 10.87 metres (111.45 to 122.32 metres downhole), including a high-grade intercept of 12.40 g/t gold over 0.54 metres. The three intercepts define a northeast trending, steeply south dipping mineralized shear structure, which would approximately parallel the strike/dip of the West Zone, which is open along strike and down-dip.

As part of Balmoral’s on-going target generation and testing program three new base metal targets were drilled during the fall program.

Drill hole MDX-13-39 (see Figure 1) intersected what is interpreted by the Company to be an exhalative horizon, commonly associated with the marginal phases of Cu/Zn/Pb VMS deposits, which returned elevated levels of zinc-lead-silver and gold. This exhalite – see photo at www.balmoralresources.com/s/Martiniere.asp – was intersected over a down-hole length of approximately 4.9 metres (97.9 to 102.8 metres). It is associated with a previously untested, 700 metre long EM conductor. The exhalative horizon is underlain by an extensive chlorite-sulphide alteration zone, which like a similar alteration “pipe” beneath the Martiniere East VMS discovery, is anomalous in gold mineralization returning an average grade of 0.18 g/t gold over 54.14 metres from 154.86 to 209.00 metres down the hole. The hole was terminated in the alteration zone at a down-hole depth of 209.00 metres. Additional testing is planned for this area.

Hole MDX-13-38, testing a second target 1500 metres to the north of hole 39, and intersected a 16 metre wide interval of pyritic mudstone with locally anomalous copper, lead, zinc and silver values. An extensive series of conductors are present in the MDX-13-38 area and additional geophysical work is planned prior to a resumption of drill testing.

Balmoral plans to resume drilling on the Detour Gold Trend Project within the next 3-4 weeks. The initial drill plan calls for the resumption of drill testing in the Bug Lake area of the Martiniere Property shortly after completion of the winter road into the Martiniere camp. Drilling of gold and base metal targets in the Grasset area will commence shortly thereafter. The extreme cold weather in Eastern Canada has allowed for near perfect ground conditions for the winter drill program.

Balmoral is a Canadian-based precious metal exploration and development company focused on the expansion and delineation of high-grade gold discoveries along the Detour Gold Trend in Quebec, Canada. With a philosophy of creating value through the drill bit and with a focus on proven productive precious metal belts, Balmoral is following an established formula with a goal of maximizing shareholder value through discovery and definition of high-grade, Canadian gold assets.