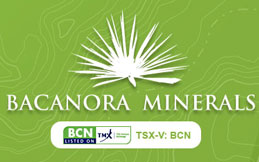 BACANORA MINERALS LTD. (TSX VENTURE:BCN) is pleased to announce that construction of its pilot plant in Hermosillo, Mexico is complete and it is entering the commissioning phase. Commissioning is expected to take approximately two weeks. The pilot plant will initially be supplied with colemanite-bearing material excavated from the Company’s El Cajon borate deposit located near the town of Magdalena de Kino, Sonora, Mexico. Bulk sampling of approximately 2,000 tonnes of material from the El Cajon borate deposit has been completed to use as feed for the pilot plant.

The pilot plant has the capacity to process 150 tonnes of material per day. The object of the test work will be to produce colemanite samples for potential consumers, in order to establish a market and pricing for El Cajon colemanite, as well as data needed to move the project forward to the feasibility stage for larger borate mining and production facilities.

About the Magdalena Borate Project:

Highlights of the technical report entitled “Preliminary Economic Assessment for the El Cajon Borate Deposit, Magdalena Basin Project, Sonora, Mexico” and dated January 4, 2013  which has been completed in respect of the El Cajon deposit for a potential colemanite mine, include a production facility with a mining rate of 231,100 tonnes averaging 10.5% B2O3 per annum to yield 50,000 tonnes of 40-42% colemanite concentrate per year over a 25 year mine life and suggest annual revenue of $US25 million for an IRR of 24.8% with a 4 year pay back. Capital costs are estimated at $US7.25 million and average operating costs at $US170/tonne. Net Present Value of the project, discounted at 8%, is $US113 million, assuming an average colemanite concentrate price of $US500/tonne. It should be noted that the economic assessment set forth in the PEA and all figures reproduced therein and herein are based upon indicated mineral resources. Readers are cautioned that mineral resources that are not mineral reserves do not have demonstrated economic viability. In addition, the PEA includes inferred mineral resources that are considered too speculative geologically to have the economic considerations applied to them that would enable them to be categorized as mineral reserves, and there is no certainty that the preliminary assessment will be realized.

Colemanite is a boron mineral that is used to produce boric acid, a compound used in a number of industrial applications that are in general designed to reduce energy consumption. Colemanite itself has industrial applications in ceramics and agriculture. Current contract prices for colemanite range from $US630 to $US730 per tonne; contract prices for chemical grade boric acid range from $US800 to $US1,250 per tonne, depending on purity.