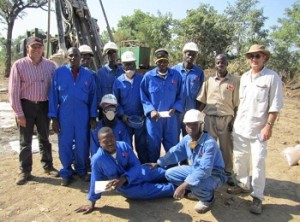 B2Gold Corp. (TSX:BTO) (NYSE MKT:BTG) (NAMIBIAN:B2G) is pleased to announce that it has entered into a definitive Merger Implementation Agreement with Papillon Resources Limited pursuant to which B2Gold and Papillon have agreed to combine the two companies at the agreed exchange ratio of 0.661 B2Gold common shares for each Papillon ordinary share held.

The Merger Consideration represents a purchase price of approximately A$1.72 per Papillon share and values the transaction at approximately US$570 million. Papillon has been in a trading halt (which has extended into a suspension of trading on ASX) since May 26, 2014, following receipt of an indicative non-binding proposal from B2Gold on May 24, 2014, which included a proposed merger ratio. While the Papillon shares have not been trading since May 23, 2014, the B2Gold share price has fallen since that date due to a combination of the gold price volatility and media speculation surrounding this transaction.

The premium implied by the B2Gold offer as at May 23, 2014 (when the B2Gold indicative non-binding proposal was received by Papillon) and the last closing price of each company on June 2, 2014 are:

The merger will be implemented by way of a Scheme of Arrangement under the Australian Corporations Act 2001. Upon completion of the Scheme, existing B2Gold shareholders and former Papillon shareholders will own approximately 74% and 26%, respectively, of the issued common shares of the combined company.

The combination of B2Gold and Papillon will result in a company with a significant growth profile beyond its three operating mines, which collectively produced 366,000 ounces of gold in 2013 at a cash cost of US$681 per ounce and an all in sustaining cost of US$1,064 per ounce. B2Gold’s production is projected to increase to approximately 550,000 ounces by 2015 as the low cost Otjikoto mine in Namibia is scheduled to commence gold production in late 2014.

The combined company will be focussed on furthering the development of the Fekola project in Mali, and continuing to operate B2Gold’s existing Masbate gold mine in the Philippines and Limon and La Libertad gold mines in Nicaragua. Further, B2Gold will possess a strong growth profile through its Otjikoto project, the Kiaka project in Burkina Faso and its Gramalote project (51% AngloGold Ashanti/49% B2Gold joint venture) in Colombia. B2Gold will have the management, development, construction, operational and in-country experience combined with the funding capacity to optimise the development of Fekola for the benefit of all shareholders. B2Gold is one of the few mining companies with a proven in-house construction team with a track record of building high quality plants and infrastructure while reducing capital costs. In addition, B2Gold has a highly regarded and experienced exploration team that sees significant exploration potential at the Fekola project, in addition to B2Gold’s existing assets.

“At B2Gold, we are excited about the merger with Papillon as it will add the high grade Fekola project to our rapid growth as a profitable gold producer. We believe this merger will bring great value to all shareholders and we congratulate Papillon’s strong technical team on advancing the impressive Fekola project to a robust prefeasibility study and look forward to working together to advance the project to production” said Clive Johnson, President and Chief Executive Officer of B2Gold.

“The combination of Papillon and B2Gold provides Papillon shareholders with the opportunity to gain immediate exposure to a significant, growth orientated and profitable producer with diversified operations whilst still retaining material exposure to the upside potential of Fekola. B2Gold’s track record of successful mine development and operation, coupled with its balance sheet, cashflows and funding capacity will de-risk the development of Fekola and should maximize the value of the project for both Papillon and B2Gold shareholders,” commented Mark Connelly, Managing Director and Chief Executive Officer of Papillon.

Significant exploration programs at existing mines and development stage projects including Fekola, as well as at highly prospective earlier stage projects in Nicaragua, the Philippines, Colombia and Burkina Faso.

Fekola is targeted, subject to a definitive feasibility study, to be the next construction project for B2Gold’s Otjikoto Development Team and a seamless transition after the scheduled commissioning of Otjikoto in the fourth quarter of 2014.

Cash and cash equivalent assets of approximately $190 million which, in addition to continued strong cash flow from operations and unused debt capacity of $150 million, coupled with good access to capital, will allow B2Gold substantial flexibility for future development activities including Fekola.

The Board of Directors of each of Papillon and B2Gold have determined that the proposed transaction is in the best interests of their respective shareholders based on a number of factors, including financial advice received from their respective financial advisors (in the absence of a superior proposal for Papillon and subject to an independent expert opining that the Scheme is in the best interests of Papillon shareholders).

Pursuant to the Merger Agreement, it is proposed that B2Gold will acquire all the issued and ordinary shares of Papillon by way of a Scheme of Arrangement under the Australian Corporations Act 2001 (Cth). Under the terms of the Scheme, Papillon shareholders will receive 0.661 B2Gold common shares for each existing Papillon ordinary share they hold. B2Gold shareholders will continue to hold their existing B2Gold common shares.

Pursuant to the Merger Agreement, it is proposed that all outstanding Papillon options will be cancelled and option holders issued B2Gold shares as consideration for the cancellation of their options based on the in the money amount of such Papillon options determined by using the value implied by the Merger Consideration as at June 2, 2014. Papillon also has a number of performance rights that will automatically vest into ordinary shares upon court approval of the Scheme in accordance with the terms of the performance rights, and form part of the Scheme.

The Merger Agreement also contains customary deal protection mechanisms, including no shop and no talk provisions, matching and notification rights in the event of a competing proposal and a mutual reimbursement fee payable by B2Gold or Papillon in specified circumstances.

The Merger Agreement will also be released to the ASX by Papillon in a contemporaneous announcement.

The indicative timetable for implementation of the transaction is anticipated to be as follows:

B2Gold’s financial advisors are Canaccord Genuity Corp. and Raymond James Ltd., its Canadian legal counsel is Lawson Lundell LLP and its Australian legal counsel is K&L Gates LLP. Each of Canaccord Genuity Corp. and Raymond James Ltd. has provided an oral opinion to the Board of Directors of B2Gold that the consideration to be offered is fair, from a financial point of view, to the shareholders of B2Gold.


B2Gold Corp. is a Vancouver based gold producer with two mines in Nicaragua, one mine in the Philippines, one mine under construction in Namibia and a strong portfolio of development and exploration assets in Nicaragua, the Philippines, Namibia and Colombia. B2Gold was founded in 2007 by the former executive and management team of Bema Gold Corporation. Bema grew from a junior explorer to an international gold producer that was acquired by Kinross Gold Corporation through a C$3.5 billion transaction in February 2007. B2Gold’s corporate objective is to build further shareholder value through the exploration and development of existing projects and additional accretive acquisitions, capitalizing on the extensive experience and relationships that management has developed over the past 25 years. B2Gold trades on the Toronto Stock Exchange under the symbol “BTO”, on the NYSE MKT under the symbol “BTG” and on the Namibian Stock Exchange under the symbol “B2G”.