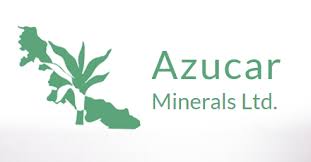 Azucar Minerals Ltd. (TSX-V: AMZ) (OTCQB: AXDDF) is pleased to announce that it has received and compiled results from the two holes completed into the large lithocap target first discussed in its press release of March 10, 2022. Both holes passed through typical clay dominant lithocap alteration into phyllic alteration. Large intervals of brecciated rock were intersected possibly reflecting a diatreme like body that may have disrupted any earlier porphyry alteration zonation in this area. Alteration data was collected from the core using a Terraspec infrared spectrometer along with the samples for assay. No significant intervals of porphyry mineralisation were intersected however the second hole intersected a late sulphide vein that returned 0.70 metres of 0.95% copper and 0.42 g/t gold. At present the Company is reviewing how best to further explore this lithocap target as well as other zones on the project and will update shareholders once this is complete.

J.D. Poliquin, Chairman of Azucar Minerals stated, “These two holes were the first to be drilled into this newly defined alteration target. It is important to remind shareholders that this zone is one of many porphyry targets and centres on the project. We have defined a preliminary resource on the most explored Norte Zone, and we intend to continue our exploration on this project to further unlock the potential of the multiple zones and targets which are yet to be fully tested.”

Past drilling campaigns have returned significant porphyry copper and gold assays from multiple targets. High grade intersections from these targets highlight the potential for significant mineral endowment and for higher grade porphyry mineralisation including those tabularised below (see Figure 1 for locations). The known targets include the Villa Rica, Porvenir, Encinal and Primo Zones. At the Villa Rica Zone, located about 1.8 km south of the Norte Zone, initial drilling in 2017 (on the Raya Tembrillo Target area) intersected two styles of mineralisation; hypogene copper-gold porphyry mineralisation (115.00 metres of 0.57 g/t gold and 0.27% copper, see press release of November 28, 2017) and near surface enriched copper mineralisation with an apparent tabular distribution (94.00 metres of 1.36% copper; see press release of December 13, 2017). At the Encinal Zone, located 4.3 kilometres to the southeast of the Norte Zone, Azucar reported (see press release of June 29, 2017) the results of initial drilling on an exposed stockwork zone (Hole EC-17-025) that returned results including 34.47 metres grading 0.73 g/t Au and 0.20% Cu. The Company continues to review the geology and past exploration results in order to plan future exploration programs.

More information on El Cobre is available on the Azucar website at http://www.azucarminerals.com.

For details on the estimation of mineral resources, including the key assumptions, parameters and methods used to estimate the Mineral Resources at the El Cobre property, Canadian investors should refer to the report dated effective November 13, 2020, and titled “NI 43-101 Technical Report Mineral Resource Estimate on the El Cobre Copper-Gold-Silver Property, Veracruz State, Mexico” which is available under Azucar Minerals’ profile on SEDAR (www.sedar.com) and on the Company’s website. The Technical Report was authored by Kris Raffle, P.Geo. of APEX Geoscience Ltd., and Sue Bird, M.Sc., P.Eng. of Moose Mountain Technical Services. The NSR and AuEq values were calculated using US$1,500/oz gold, US$3.00/lb copper and US$18/oz silver, and using metallurgical recoveries of 88% for gold and copper, and 70% for silver.

Mr. Norm Dircks, a Certified Professional Geologist (AIPG, CPG-11938) is a Qualified Person as defined by National Instrument 43-101 and has reviewed and approved the other technical information in this news release. The porphyry mineralisation and past drilling results discussed and reviewed in this news release are associated with broad areas of alteration and stockwork and sheeted porphyry style veining. True widths cannot be determined at this time. The analyses reported were carried out at ALS Global Laboratories of North Vancouver using industry standard analytical techniques. For gold, samples are first analysed by fire assay and atomic absorption spectroscopy (“AAS”). Samples that return values greater than 10 g/t gold using this technique are then re-analysed by fire assay but with a gravimetric finish. For copper, samples are first analysed by Inductively Coupled Plasma – Atomic Emission Spectroscopy (“ICP-AES”), with four acid digestion. Samples that return values greater than 10000 g/t copper using this technique are then re-analysed by HF-HNO3-HCLO4 digestion with HCL leach and ICP-AES finish. Blanks, field duplicates and certified standards were inserted into the sample stream as part of Azucar’s quality assurance and control program which complies with National Instrument 43-101 requirements.

Azucar is an exploration company exploring the El Cobre project in Veracruz, Mexico, which covers multiple gold-rich porphyry targets, as demonstrated by past drilling. Azucar holds a 100% interest in the El Cobre project, subject to net smelter returns royalty interests, assuming production from the property exceeds 10,001 tonnes per day of ore, totaling 2.25% which can be reduced to 2.0% though the payment of US$3.0 million.