Aya Gold & Silver Inc. (TSX: AYA) is pleased to announce additional high-grade silver results from its 2021 drill exploration program that extend mineralization along strike and at depth of the new Zgounder East Zone in the Kingdom of Morocco.

“Today’s high-grade results confirm continuity and expand mineralization along strike and down dip of the recently discovered eastern zone at Zgounder. The addition of intersection ZG-21-22 to our inventory of mineralized zones and the delineation of additional zones bring us closer to achieving our mineral resource target to support our feasibility study and the expansion of Zgounder,” said Benoit La Salle, President & CEO.

Assay results were received for eight surface core holes, five underground core holes, and 13 T28 electric percussion holes, which continue to confirm the mineralized potential at depth as well as in the eastern extension of the Zgounder Mine (see Figure 1). For a comprehensive summary of today’s results from the 2021 drill program, please refer to Appendix 1 of this press release for surface results and Appendix 2 for underground results.

To date, over 26,800m of the 41,000m drilling program scheduled in 2021 have been carried out on Zgounder, of which 15,000m were drilled at surface. Eight diamond drilling rigs are currently turning on the property.

For core drilling, all individual samples represent approximately one meter in length of core, which was halved. Half of the core is kept on site for reference, and its counterpart is sent for preparation and assaying to African Laboratory for Mining and Environment in Marrakech, Morocco. All samples are analysed for silver, copper, iron, lead, and zinc using Aqua regia and finished by atomic absorption spectroscopy (“AAS”). Samples grading above 200 g/t Ag are reanalysed using fire assaying.

Since its appointment in mid-2020, Aya’s new management team has been focused on maximising shareholder value by anchoring sustainability at the heart of its production, resource, governance, and financial growth plans. 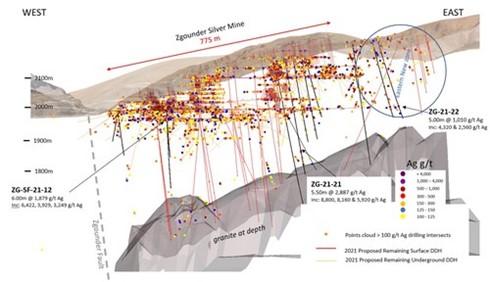