Aya Gold & Silver Inc. (TSX: AYA) (OTCQX: AYASF) is pleased to announce high-grade silver drilling results from its ongoing drilling program at the Zgounder Silver Mine in the Kingdom of Morocco.

Included in this release are results for 61 holes, which include 10 surface diamond drill holes (“DDH”), 13 underground DDH, 22 T28 and 16 YAK (T28 & YAK: percussion drilling using an air-compressed hammer) holes.  For a full summary of today’s results, refer to Appendixes 1 and 2.

For core drilling, all individual samples represent approximately one metre in length of core, which is halved. Half of the core is kept on site for reference, and its counterpart is sent for preparation and assaying to African Laboratory for Mining and Environment (“Afrilab”) in Marrakech, Morocco. All samples are analyzed for silver, copper, iron, lead, and zinc using Aqua regia and finished by atomic absorption spectroscopy (“AAS”). Samples grading above 200 g/t Ag are reanalyzed using fire assaying.

The Corporation will release its second quarter 2022 financial and operational results before market-open on August 12, 2022. 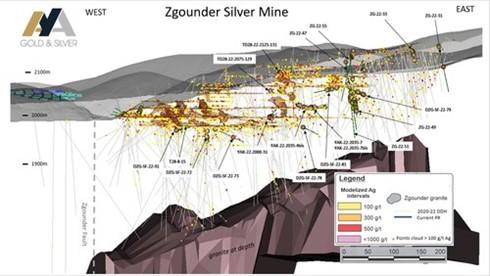