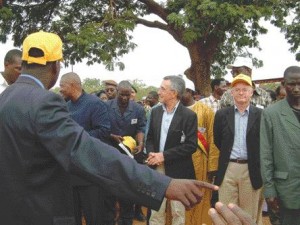 Avnel Gold Mining Limited (TSX:AVK) is pleased to announce today the closing of its previously announced bought deal financing arrangement that it entered into with BMO Capital Markets and Cormark Securities Inc., as joint bookrunners, under which the underwriters have purchased, on bought deal basis, 42,900,000 units in the capital of the Company at a price of $0.28 per Unit for aggregate gross proceeds of $12,012,000.

Each Unit consists of one ordinary share in the capital of the Company and one-half of one share purchase warrant. Each whole Warrant will be exercisable into one Ordinary Share at an exercise price of C$0.40 per share until May 7, 2017. In addition, the Company has granted the Underwriters an option, exercisable at the initial Offering price, in whole or in part, at any time for a period of 30 days following the closing of the Offering, to purchase up to an additional 15% of the Offering to cover over-allotments, if any. In the event that the Over-Allotment Option is exercise in its entirety, the aggregate gross proceeds of the Offering shall be approximately C$13,813,800.

The Units were offered by way of a short form prospectus in all of the provinces of Canada, other than the province of Quebec.

The Company intends to use the net proceeds of the Offering to advance the Company’s Kalana gold project in Mali and for working capital and general corporate purposes.

Avnel Gold is a TSX-listed gold mining, exploration and development company with operations in south-western Mali in West Africa. The Company’s focus is to develop its 80%-owned Kalana Main Project from a small underground mine into a low-cost, open pit mining operation. The Company is also advancing several nearby satellite deposits on the 387 km2 30-year Kalana Exploitation Permit.

On March 31, 2014, the Company reported a Mineral Resource estimate and the results of a Preliminary Economic Assessment (“PEA”) prepared by Snowden Mining Industry Consultants. The PEA outlines a 14-year open-pit mine life at the Kalana Main Project recovering 1.46 million ounces of gold at an average “all-in sustaining cost” of $577 per ounce with an initial capital cost of $149 million. Utilising a gold price of $1,110 per ounce and a 10% discount rate, the PEA reported a net present value (“NPV”) of $194 million after-tax and imputed interest, and an internal rate of return (“IRR”) of 53% on a 100% project basis. Similarly, utilising a 5% discount rate and a $1,300 per ounce gold price, the NPV was reported as $424 million and an IRR of 74%. The Company is now advancing the project to Definitive Feasibility, which is scheduled to be completed in the first quarter of 2016.