Aurania Resources Ltd. (TSX-V: ARU) (OTCQB: AUIAF) (FSE: 20Q) reports that the third hole drilled on the 22 kilometre-long Tiria-Shimpia silver-zinc target intersected the extension of the mineralized layer that was seen at surface. Hole SH-003 intersected 5 metres at a grade of 10.5 grams per tonne silver and 2.5% zinc within a 31.5m thick halo of mineralization in layered sedimentary rock in the central part of the Company’s Lost Cities – Cutucu Project area in southeastern Ecuador.

Aurania’s Chairman & CEO, Dr. Keith Barron commented, “We’ve finally hit significant mineralization in drill hole 3 at our Tiria-Shimpia target in the Lost Cities Project. We have intersected the extension of mineralization exposed at surface as planned, and now we need to home in on the higher-grade parts of the system within the 22km long trend defined by metal enrichment in soil.”

Details of the Mineralization Intersected in Hole SH-003

Drill hole 3 at Tiria-Shimpia was planned to intersect a layer of fracture-controlled mineralization that geological mapping at surface showed to be 20m wide and over 800m long – layer “P” in the Press Release dated April 12, 2021. The top of the targeted layer of crackle-brecciated limestone was intersected at a depth of 35m down-hole, and mineralization occurs over 29m at a grade of 3.5g/t silver and 0.6% zinc, that contains the higher-grade interval of 5m at 10.5g/t silver and 2.5% zinc.

The crackle-brecciated limestone is sandwiched between layers of sandstone. Pathfinder elements such as naturally-occurring arsenic, cadmium, mercury and strontium are closely related with the silver-zinc. The whole limestone-sandstone sequence in which the mineralization occurs, shows illite clay alteration.

The sandstone is likely to have provided the permeable layers along which the mineralizing fluids flowed – providing the access required for the fluids to react with the limestone and deposit the metals. The presence of the alteration mineral illite, indicates that the mineral-bearing fluids had a temperature of 200° to 300°C.

Hole 3 was drilled approximately 2km to the north of where holes SH-001 and SH-002 were drilled (Figure 1). A total of 1,018 metres has been drilled in the three holes completed at Tiria-Shimpia.

The field team undertaking the silver-zinc exploration is comparing geological information observed in the drill core with their mapping at surface to determine the geometry of the system. Soil geochemistry and MobileMT data are being incorporated into this focus on refining the target for higher-grade mineralization. Additional drill sites will be selected from this on-going work. 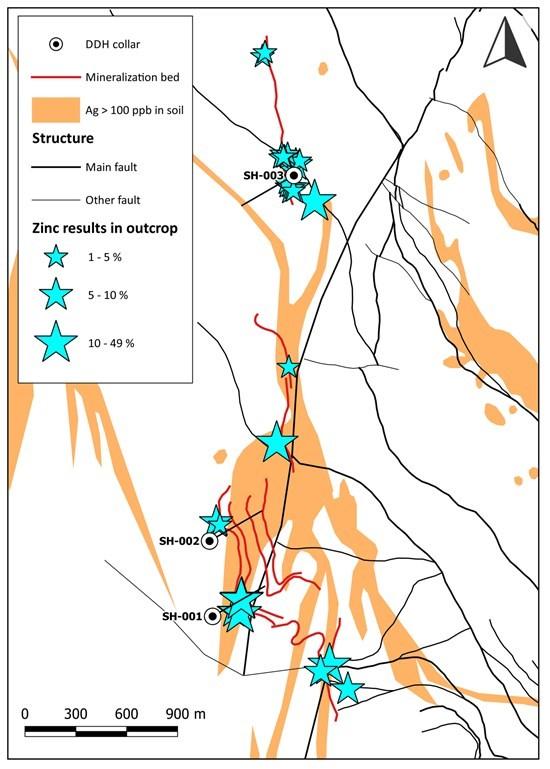 Figure 1. Map of the north-central part of Tiria-Shimpia showing zinc grades in outcrop relative to silver in soil, and the positions of drill holes SH-001 to SH-003.

Laboratories: The samples were prepared for analysis at MS Analytical in Cuenca, Ecuador, and the analyses were done in Vancouver, Canada.

Sample preparation: The rock samples were jaw-crushed to 10 mesh (crushed material passes through a mesh with apertures of 2 millimetres (“mm”)), from which a one-kilogram sub-sample was taken. The sub-sample was crushed to a grain size of 0.075mm and a 200 gram split was set aside for analysis.

Analytical procedure: Approximately 0.25g of rock pulp underwent four-acid digestion and analysis for 48 elements by ICP-MS. For the over-limit samples, those that had a grade of greater than 1% copper, zinc and lead, and 100g/t silver, 0.4 grams of pulp underwent digestion in four acids and the resulting liquid was diluted and analyzed by ICP-MS.

QAQC: Aurania personnel inserted a certified standard pulp sample, alternating with a field blank, at approximate 20 sample intervals in all sample batches. Aurania’s analysis of results from its independent QAQC samples showed the batches reported on above, lie within acceptable limits. In addition, the labs reported that the analyses had passed their internal QAQC tests.

The geological information contained in this news release has been verified and approved by Jean-Paul Pallier, MSc. Mr. Pallier is a designated EurGeol by the European Federation of Geologists and a Qualified Person as defined by National Instrument 43-101, Standards of Disclosure for Mineral Projects of the Canadian Securities Administrators.