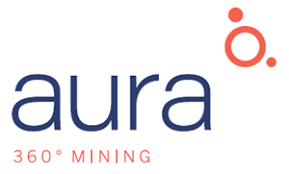 First exploration drill holes at the Bananal Target located approximately twenty-two kilometers from Ernesto Plant returned encouraging results. The company is working towards defining resources in Bananal after the next phase of drilling starting in March 2020

The EPP Complex is located approximately 450 kilometers west of Cuiabá, the state capital of Mato Grosso and 12 kilometers from the town of Pontes e Lacerda. It consists of a processing plant with several satellite open pit deposits (Lavrinha, Japones, Nosde and Ernesto) and the underground Pau-a-Pique mine. The complex produced 58k Oz in 2018

In 2019 Aura invested US$ 2.95 million between regional and near mine exploration.

Bananal is an exploration target located along the western border of the Guapore Gold Belt, approximately 22 kilometers from the Ernesto Plant. The target is comprised of an approximately 10-kilometer trend with significant chip sample results (that showed values from 0.1g/t to 31.8 g/t Au) and widespread hydrothermal alteration characterized mostly by quartz veining with pyrite pervasive sericitic alteration hosted in metassediments of the Mesoproterozoic Aguapei Group, mostly metasandstones and metaconglomerates. Small artisanal mining activities occurred, mostly in alluvium deposits but with some occurring in primary mineralization.

A total of 24 exploration diamond drill holes, totaling 5,170 meters were undertaken in two main zones (Bananal South and North) where most of the high-grade surface rock sample results were concentrated (Figure 1). The drill holes results are summarized in the following table:

At Bananal South, approximately 600 meters along the strike was tested and results indicated significant mineralization along 300 meters strike. It remains completely open downdip and downplunge (Figure 2 and 2A) characterized by hydrothermal breccia / quartz stockwork zone with pyrite, generally oxidised, pervasive sericitic alteration and local silicification. Visible gold is common, even in intervals that returned from laboratory as low grade gold in standard fire assay analysis, indicating a significant nugget effect.

The metasedimentary sequence at Bananal South appears to be folded and the main mineralization seems to consist of high-grade shoots, and more than one level of mineralization may exist.

At Bananal North the drill holes used to test old artisanal mining areas did not return with significant gold values (BAN0015 to 0022). However the holes BAN0023 and 0024 located approximately three kilometers northwest of Bananal South in the same geological setting yielded encouraging intersections.. Drilling will resume in March 2020 focused on infill and step out in both the North and South zones. The infill drilling program of the first half of 2020 will upgrade the quality and quantity of resources in Bananal South.  The company is working towards defining resources in Bananal after the program.

The second half of 2020 will focus on converting inferred resources to Measured and Indicated. The resource estimation will be followed by a mine plan and geo-metallurgy testing to determine reserves and an initial mine design.

Aura incorporates a rigorous Quality Assurance and Quality Control program for all of its mines and exploration projects which conforms to industry Best Practices as outlined by National Instrument 43-101. Samples from Ernesto Mine and Bananal were analyzed at SGS – Geosol Laboratory in Vespasiano, Minas Gerais, Brazil.

Farshid Ghazanfari, P.Geo., Geology and Mineral Resources Manager for Aura Minerals Inc. has reviewed and confirmed the scientific and technical information contained within this news release and serves as the Qualified Person as defined in National Instrument 43-101.

Aura is focused on mining in complete terms – thinking holistically about how its business impacts and benefits every one of our stakeholders: our company, our shareholders, our employees, and the countries and communities we serve. We call this 360° Mining.

Aura is a mid-tier gold and copper production company focused on the development and operation of gold and base metal projects in the Americas. The Company’s producing assets include the San Andres gold mine in Honduras, the Ernesto/Pau-a-Pique gold mine in Brazil and the Aranzazu copper-gold-silver mine in Mexico. In addition, the Company has two additional gold projects in Brazil, Almas and Matupá, and one gold project in Colombia, Tolda Fria.