Aura Announces Closing of $1,538,000 Private Placement and Completion of the Amalgamation with Territory Metals Corp.

Aura Announces Closing of $1,538,000 Private Placement and Completion of the Amalgamation with Territory Metals Corp. 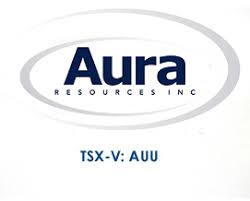 Aura Resources Inc. (TSXV: AUU) announces that following significant investor demand it has closed its private placement financing raising gross proceeds of $1,538,000 with the issuance of a total of 25,633,333 units, at $0.06 per unit. Each unit consists of one common share of the Company and one-half common share purchase warrant. A total of 12,816,666 warrants were issued entitling the holders to purchase one common share of the Company at a price of $0.10 per share until July 24, 2022.

In connection with the Offering, the Company has paid eligible finders cash commissions in the amount of $19,320 and an aggregate of 202,000 finder warrants. Each Finder Warrant entitles the finder to acquire one common share at an exercise price of $0.10 and is exercisable until July 24, 2022.

The Offering is subject to final approval of the TSX Venture Exchange. All securities issued under the Offering are subject to a statutory hold period until November 25, 2020.

Mr. Robert Johansing, President, CEO and director and Mr. John McNeice, Chief Financial Officer participated in the private placement and acquired an aggregate of 1,673,333 units for $100,400. The participation of these insiders in the private placement constitutes a Related Party Transaction within the meaning of Multilateral Instrument 61-101 Protection of Minority Security Holders in Special Transactions. The board of directors of the Company, with Mr. Johansing abstaining from the vote, determined that the transaction is exempt from the formal valuation and minority shareholder approval requirements contained in sections 5.5(a) and 5.7(1)(a) of MI 61-101 for the related party transaction, as neither the fair market value of securities issued to insiders nor the consideration paid by insiders exceeded 25 percent of the Company’s market capitalization. The Company did not file a material change report in respect of the transaction 21 days in advance of the closing of the private placement because insider participation had not been confirmed. The shorter period was necessary in order to permit the Company to close the private placement in a timeframe consistent with usual market practice for transactions of this nature.

The aggregate proceeds raised under the Offering will be used for exploration expenditures related to the Gold Chain, Arizona project; the Jefferson Canyon, Nevada project; the Tip Top Gold, Nevada project (acquired as part of the amalgamation with Territory Metals Corp.) and, for working capital and general corporate purposes.

The Company is also pleased to announce the closing of the amalgamation agreement for the acquisition of Territory Metals Corp. as announced on June 4, 2020. The Company’s wholly-owned subsidiary, 1251498 B.C. Ltd. and Territory have amalgamated and become a wholly-owned subsidiary of Aura, Territory Metals Ltd. Territory’s key asset is the Tip Top Gold project located in Esmeralda County, Nevada USA. The Tip Top Gold project is subject to an agreement of purchase and sale whereby Territory has a right to acquire a 100% interest in the project.

Upon closing of the Amalgamation Agreement, Mr. Gary Thompson was appointed as a director of Aura and Chairman of the board of directors of Aura.

Additionally, the Company announces that it has settled outstanding payables in a total amount of $107,500 with the issuance of 1,791,667 common shares of the Company at a deemed value of $0.06 per common share. This balance relates to amounts payable for accrued compensation to the Company’s Chief Executive Officer and Chief Financial Officer. The common shares issued have a statutory hold period until November 25, 2020.

Aura is a TSX Venture listed company engaged in the acquisition, exploration and development of precious metal prospects in Arizona, USA (Gold Chain project, subject to an option to earn a 100% interest), in Nevada, USA (Jefferson Canyon project, subject to an option to earn 100%), in Nevada , USA (Tip Top Gold project, subject to a purchase agreement to acquire a 100% interest), in Nunavut, Canada (37.1% interest in the Greyhound project under operation by our partner, Agnico Eagle Mines Limited), and, in Oaxaca, Mexico (20% owned Taviche project, operated by Minaurum Gold Inc.). Upon final acceptance of the Offering, the amalgamation of Territory and the share for debt transactions Aura will have 87,479,283 common shares outstanding.