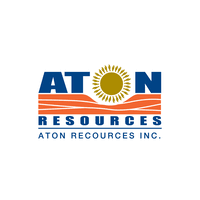 Aton Resources Inc. (TSX-V:AAN) is pleased to update investors with the results of the first 3 drill holes from the reverse circulation percussion drilling programme at the Rodruin prospect within the Company’s 100% owned Abu Marawat Concession located in the Eastern Desert of Egypt.

“These results really speak for themselves. The results correlate very well with our mapping and channel sampling as well as the previous surface grid and underground sampling at Aladdin’s Hill, and we are very encouraged by them,” said Mark Campbell, President and CEO. “This ancient mining area, which we now call Rodruin, had been lost until we found it last December. This discovery was no small accomplishment, as the site is located in very rugged, isolated and steep terrain. Our regional exploration programme initiated last year over our Abu Marawat Concession area was the genesis of the Rodruin discovery. The ancient high grade tailings dumps at Eradiya East, approximately 3km from Rodruin and the archaeological evidence of technologically advanced ancient processing sites seen in the surrounding areas, led us to seek the source of what was apparently potentially very high grade ore being mined by the ancients. Through the use of spectral imaging and good old boots on the ground, we were able to discover this large ancient mining site. Subsequently, we have built a 4.5km road up the side of the mountain, and are continuing to construct drill access roads and pads.  Our mapping and sampling programmes have assisted us in developing our geological interpretation that Rodruin has the potential to be a very significant system of gold mineralisation, including some very high grade zones within it. We believe that the initial results from our ongoing first pass drilling programme appear to be confirming this potential.”

RC drilling commenced at Rodruin on August 27, 2018 (see news release dated August 28, 2018) and 11 holes have been completed to date, ROP-001 to ROP-011. Aton has contracted Capital Drilling to undertake the RC drilling using a track-mounted Gemrok MP-1000 multi-purpose rig, which is capable of both RC and diamond drilling (see Figure 1), operating with a large, truck-mounted 500psi/1300cfm compressor. The first phase of drilling is planned to consist of approximately 4,000 to 6,000 metres of RC drilling, initially testing the main zone of ancient workings and mapped mineralisation in the Aladdin’s Hill area, before moving on to other mineralised areas.

Drill holes were drilled at c. 140mm diameter, and the bulk percussion chip samples were collected directly into large plastic bags from the cyclone every metre, numbered with the hole number and hole depths by the drill crew, and laid out sequentially at the drill site (see Figure 1). RC chips were logged onsite by a senior Aton geologist. The bulk 1m samples were weighed, and subsequently riffle split through a 3-tier splitter onsite by Aton field staff to produce an approximately 1/8 split, which was collected in cloth bags, numbered and tagged with the hole number and depth. The reject material from this initial bulk split was re-bagged, labelled and tagged, and the bulk reject samples will be stored and retained on site at Rodruin.

All the 1m split samples were weighed again, and the samples selected for assay were riffle split onsite, typically a further 3-4 times using a smaller lab splitter, to produce a nominal c. 250-500g sample split for dispatch to the assay laboratory. All samples were sent for assay from holes ROP-001 to ROP-003. The laboratory splits were allocated new sample numbers. QAQC samples were inserted into the sample runs dispatched to the assay laboratory at a nominal rate of 1 duplicate sample for every 10 drill samples, 1 blank sample every 10 samples, and 1 standard sample of a certified reference material every 40 samples. Reject material from the 1m samples after the laboratory split had been taken, and any unused 1m splits will be retained at the Company’s Hamama laboratory for future reference purposes, as and when required.

Assay results are now available for the first 3 holes, which were drilled on a southerly orientation at Aladdin’s Hill to test the zone of highly altered rocks with associated underground workings (see Figure 3). Details of the collar locations are provided in Table 1. Significant gold mineralisation was intersected in all 3 holes, and details of the mineralised intersections are provided below in Table 2.

The first holes drilled at Rodruin all tested mineralisation and ancient workings in the immediate Aladdin’s Hill area, with the first 3 holes all intersecting significant Au(-Zn-Ag-Cu-Pb) mineralisation. Narrow ancient underground workings and stopes, less than 1m in width, were intersected in all 3 holes at depth, and ROP-001 was apparently collared in a larger infilled working intersected from surface (see Table 1). Holes ROP-002 and ROP-003 were collared from the same location with both intersecting wide downhole intersections of mineralisation, predominantly hosted by a pink to brown, strongly phyllic altered granular quartz-mica-iron oxide rock, believed to be after meta-sediments or greywackes. Mineralisation is distributed throughout the bulk of the intensely phyllic altered host rock. Structurally controlled higher grade zones are localised within this highly altered rock, and are often enriched in copper. These zones have been partially exploited by the ancient miners, including the large “Aladdin’s Slot” stope which has been followed and sampled underground to a depth of c. 40m below ground level, and over an E-W strike length of at least 40m (see news release dated April 16, 2018). Mineralisation within the altered rocks consists of a complex assemblage of native gold, occasionally very coarse with grains up to 2mm in size, associated with zinc, copper, lead and arsenic supergene minerals. The transition to fresh rock in the drill holes is quite deep, and is strongly suggestive of preferential weathering down sulphide-rich mineralisation. A second, different style of predominantly Au-Zn mineralisation is associated with gossanous carbonates and slates, notably close to lithological contacts between these two rock types.

Drill hole ROP-001 intersected gossanous carbonate-hosted Au-Zn mineralisation near surface (13m @ 1.02 g/t Au, see Table 2) and what is believed to be an extension of the high grade Aladdin’s Slot underground workings into the carbonate unit, at approximately 50m down hole (5m @ 2.97 g/t Au).

Drill holes ROP-002 and ROP-003 both intersected broad downhole zones of mineralisation (see Table 2) associated with the highly altered rock hosting the main zone of underground workings at Aladdin’s Hill. True mineralised widths cannot be ascertained at this early stage of drilling. The high grade overall intersection in ROP-003 (36m @ 12.47 g/t Au) includes 2 very high grade zones (4m @ 63.15 g/t Au and 3m @ 40.67 g/t Au), one of which was associated with a narrow underground stope. These very high grade assays and zones are believed to be representative of the mineralisation present at Aladdin’s Hill, which was the main target of the ancient miners in this immediate area, as evidenced by the coincidence of the second very high grade zone with a narrow ancient stope.

Aton is very encouraged by the initial drilling results from Rodruin, and believes that the results vindicate and confirm the Company’s interpretation, developed since the initial discovery of Rodruin in December 2017, that the Aladdin’s Hill area in particular, and the entire Rodruin area in general, has the potential to host discrete zones of very to exceedingly high grade gold mineralisation, associated with abundant coarse gold, located within a large and a really very significant gold mineralised system. The Company is currently working to develop as many additional areas away from Aladdin’s Hill as practically possible for drill testing during the ongoing initial Phase 1 RC drilling programme, including the Spiral Pit, as well as gossanous mineralisation on the Central Buttress and at the GF Zone (see Figure 2).

The Rodruin prospect was discovered in December 2017 by Aton geologists (see news release dated December 14, 2017), and is located approximately 18km east of the Company’s Hamama West mineral deposit (see Figure 4). Field mapping and sampling has indicated the presence of ancient mine workings and extensive gold mineralisation over an area of at least 700m x 400m at surface. Abundant visible gold has been identified in hand specimens from surface outcrops, and ancient dumps and underground workings, with individual selective grab samples assaying up to 321 g/t Au. The main series of extensive ancient underground workings in the Aladdin’s Hill area has also been sampled to a depth of approximately 40m below ground level, indicating continuation of the surface mineralisation at depth (see news releases dated February 6, 2018, March 5, 2018 and April 16, 2018), and drilling has now confirmed the presence of high grade gold mineralisation with individual samples returning assays of up to 221 g/t Au over metre intervals. Underground workings at the Spiral Pit have been sampled to a depth of 12-15m below ground level, returning assays of up to 35.3 g/t Au and 37.9% Zn (see news release dated August 7, 2018).

Aton Resources Inc. (AAN: TSX-V) is focused on its 100% owned Abu Marawat Concession, located in Egypt’s Arabian-Nubian Shield, approximately 200km north of Centamin’s Sukari gold mine. Aton has identified a 40km long gold mineralised trend at Abu Marawat, anchored by the Hamama deposit in the west and the Abu Marawat deposit in the east, containing numerous gold exploration targets, including three historic British mines. Aton has identified several distinct geological trends within Abu Marawat, which display potential for the development of RIRG and orogenic gold mineralisation, VMS precious and base metal mineralisation, and epithermal-IOCG precious and base metal mineralisation. Abu Marawat is over 738km2 in size and is located in an area of excellent infrastructure; a four-lane highway, a 220kV power line, and a water pipeline are in close proximity.