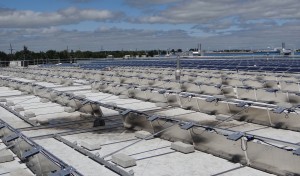 With the formal receipt of a notice of Commercial Operation from the Independent Electricity System Operator this marks the final step in the construction and connection of this solar plant.

The solar power plant was developed by its Canadian subsidiary Atlantic Solar Inc.

Atlantic Solar has continued to develop a number of projects in Ontario, Canada connected to the grid and now supplying power to Ontario.  As part of a solar development contract this project was purchased and is now owned and operated by an Ontario municipality.  Atlantic Solar continues to develop projects to be held within the previously announced Power 1 yieldco and/or sold to other asset funds and managers.

About Atlantic Wind and Solar Inc:

Atlantic is a developer of utility scale renewable energy plants with over 650 MW’s of projects at various stages of development in Canada, South America, Asia, and the Caribbean.


Bullfrog Gold Receives Assays on 6 Remaining Holes at Its Project in the Bullfrog Mining District of Nevada, Including 61 Meters of 0.78 g gold/t and 35 Meters of 0.44 g gold/t

1911 Gold Corporation (TSX-V: AUMB) is pleased to announce that i... READ MORE