Asante Gold Corporation (CSE:ASE) (GSE:ASG) (FRANKFURT:1A9) (U.S.OTC:ASGOF) announces a 20.7% increase in average monthly gold production for November and December 2022, as compared with the prior two months, from its Bibiani Gold Mine and Chirano Gold Mine in Ghana.

Asante is also providing herein other operations updates for Bibiani and Chirano. Currency is Canadian dollars unless otherwise stated. There are no comparable year-earlier results as Bibiani gold production commenced in July 2022 and Chirano was acquired on August 10, 2022. Asante’s fiscal year ends on January 31, 2023.

Dave Anthony, President and CEO, stated, “Over the past 12 months Asante has been transformed from an early-stage exploration company to a mid-tier gold producer. The significant production gains in November and December bode well for the achievement of our 400,000 ounce target from Bibiani and Chirano for the fiscal year ending January 31, 2024. Over the past five months we have made payments totaling US$83.6 million towards closing our Bibiani acquisition and repaying our gold forward sale agreement. Looking forward, we continue to capture the benefits of owning these two nearby operating mines, which incorporate a district scale land package with significant exploration potential. Value creation initiatives are proceeding across our business as we look to make Asante one of the top mining companies in Africa.”

The November and December gold production monthly average was up 34.4% from the monthly average of 17,834 ounces gold from August to October, 2022, Asante’s third fiscal quarter.

Asante expects to disclose its production results for the period November 2022 to January 2023 and the full fourth fiscal quarter in March 2023. Monthly data for the period from September to December is displayed in the bar chart below. 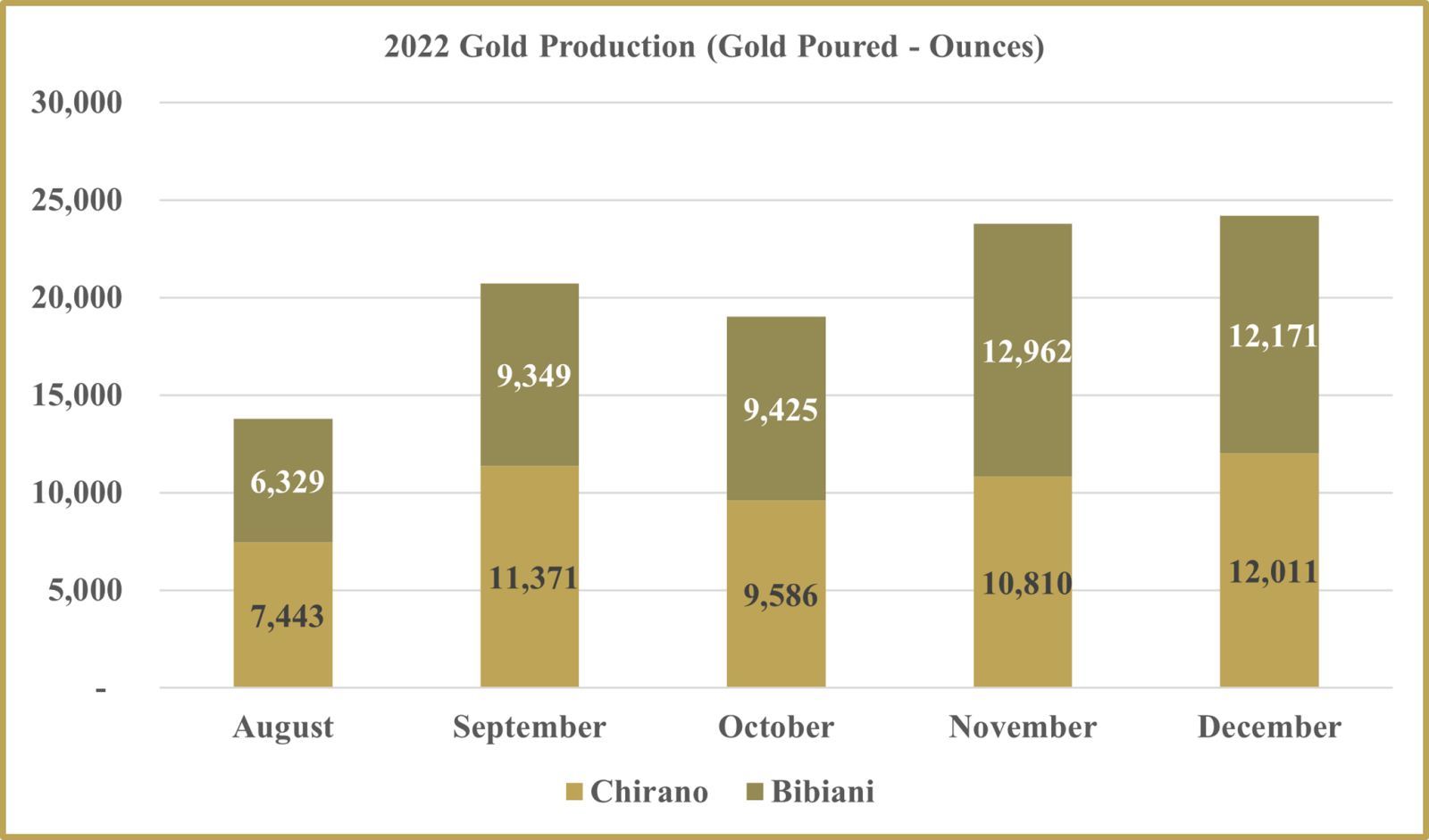 The Bibiani process plant and mine facilities are operating on a 24 hour per day basis, with ~230,000 tonnes of ore treated in each of November and December, 18% ahead of the ramp up schedule. Asante plans to increase throughput to 250,000 tonnes ore per month by end of March 2023. Preliminary gold production in December was 12,171 ounces, with 86.3% recovery from 1.70 g/t average gold grade feeding the mill. We note that as the mine development continues into Q3 2023, the process plant feed grade is planned to approximately 3 g/t.

A dedicated power supply line was completed in December enabling the Process Plant to operate with fewer power disruptions. This will support initiatives to improve operating results going forward.

The mine plan and mine to mill reconciliation for the Walsh satellite pit and Main Pit remain on target. The underground mine program study initiated in the fall of 2022 remains on track, with completion expected in June 2023. This program will define the initiatives required to extract mineralized material below Strauss, Walsh, Elizabeth Hill, Big Mug, and the Main Pit, from 2024.

The Walsh Pit continues to outperform, relative to our initial planned gold production. Exploration success in this area has increased planned production from the Walsh pit to more than 100,000 ounces from 20,000 ounces, with further exploration work underway.

The near mine exploration program continues, and the Company is working to extend the Bibiani Open Pit life of mine from 8.3 years. Exploration continues to focus on four targets: Aheman, Elizabeth, Grasshopper and South Russel. Total drilling completed in calendar 2022 exceeded 24,000 metres, slightly ahead of the plan, which was 23,900 metres. The Company plans to continue its near mine development exploration program in calendar 2023 and 2024 with planned drilling of 30,000 metres per year.

Advanced exploration at the South Russel target has continued as reported in the Company’s press release of January 17, 2023. The strike length of gold mineralization at South Russel is now confirmed to 500 metres with recent drill intercepts confirming high grade mineralization from surface, consistent in width and grade to previous intercepts. The gold mineralized system remains open along strike and to depth.

The Company plans to file an updated NI 43-101 technical report in respect of Bibiani to incorporate results of the 2022 exploration program during calendar Q3 2023. This report will incorporate exploration results and depletion.

All Chirano process plant and mine facilities are operating on a 24 hour per day basis, with ~285,000 tonnes of ore treated in December, as budgeted. Preliminary gold production in December was 12,011 ounces, with 89% recovery from 1.46 g/t average mill feed gold grade.

The Company continues with roll out of its Chirano Business Improvement Plan targeting increased gold recovery to +91%, increase gold production by 30% and reduce AISC by 10% for calendar 2024.

The planned initiatives include:

Detailed studies to capture potential synergies between the Bibiani and Chirano Mines are advanced. A principal initiative is the development of an access road to directly link the process plants, which are approximately 15 km apart. This road will support shared services activities and will be developed further, to become a mine haul road, so that ore can be treated where most appropriate.

As previously disclosed, opportunities to reduce costs and improve our operations have been estimated to present savings of up to approximately $5.5 to $7 million per year.

Asante has established a Synergy Project Management Team, to deliver opportunities to share infrastructure and realize operational cost reductions. Implementation of actions to capture these opportunities has been started, including coordinated supply of principal consumable materials to the mine with identified commonality. To date, more than $1.5 million in annual cost reductions have been captured.

The scientific and technical information contained in this news release has been reviewed and approved by Dave Anthony, P.Eng, Mining and Mineral Processing, President and CEO of Asante, who is a “qualified person” under NI 43-101.

Asante is a gold exploration, development and operating company with a high-quality portfolio of projects and mines in Ghana. Asante is currently operating the Bibiani and Chirano Gold Mines with combined forecast production of approximately 400,000 ounces of gold for 2023. The Company continues with detailed technical studies at its Kubi Gold Project for early production. All mines and projects are located on the prolific Bibiani and Ashanti Gold Belts. Asante has an experienced and skilled team of mine finders, builders and operators, with extensive experience in Ghana. Asante is listed on the Canadian Securities Exchange, the Ghana Stock Exchange and the Frankfurt Stock Exchange. Asante is also exploring its Keyhole, Fahiakoba and Betenase projects for new discoveries, all adjoining or along strike of major gold mines near the centre of Ghana’s Golden Triangle. Additional information is available on the Company’s website at www.asantegold.com.

About the Bibiani Gold Mine

Bibiani is a historically significant gold mine situated in the Western North Region of Ghana, with previous gold production of more than 4 million ounces available mining and processing infrastructure on-site consisting of a newly refurbished 3 million tonne per annum process plant, and existing mining infrastructure. Mining commenced in late February with the first gold pour announced on July 7, 2022. Commercial production was announced November 10, 2022.

About the Chirano Gold Mine

Chirano is an operating open-pit and underground mining operation located in Western region of Ghana, immediately south of the Company’s Bibiani Gold Mine. Redback acquired Chirano in 1998 and initiated a modern exploration program, which led to start of production in October 2005. The mine comprises the Akwaaba, Suraw, Akoti South, Akoti North, Akoti Extended, Paboase, Tano, Obra South, Obra, Sariehu and Mamnao open pits and the Akwaaba and Paboase underground mines. Gold Equivalent Production in 2021 was 154,668 oz on a 100% basis (source Kinross Gold Corporation).