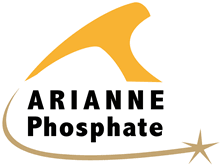 Arianne Phosphate (TSX-V: DAN) (OTC: DRRSF) (FRANKFURT: JE9N), a development-stage phosphate mining company, advancing the Lac à Paul project in Quebec’s Saguenay-Lac-Saint-Jean region, , is pleased to announce that it has closed its previously announced (see Press Release dated March 18, 2021) agreement whereby its senior secured lender, Mercury Financing Corp. had agreed to exercise its 26,780,000 warrants, reducing the amount owed under the credit facility to $24.9M.  The Lender also agreed to extend the Loan under the credit facility for a period of 5 years and reduce the annual interest rate to 8%.  In conjunction with the amended credit facility, the Lender has received 32 million non-transferable share purchase warrants, exercisable at a price of $0.33 per share, good for a period of 5 years.  These warrants are subject to a “warrant blocker” provision whereby the Lender shall not be entitled to exercise warrants resulting in the Lender holding more than 19.9% of the issued and outstanding shares of the Company.  As well, Arianne has also closed on its agreements with subordinated unsecured debt holders in the amount of $5,970,155 (see Press Release dated March 18, 2021) whereby these debt holders agreed to convert of their debt into 21,709,655 common shares of the Company and, have 11,028,584 existing warrants originally tied to the subordinated debt cancelled.  The securities issued in conjunction with both agreements are subject to a hold period ending August 1, 2021.

“This deal comes at a time when the overall agricultural macro has turned very favorable,” said Brian Ostroff, CEO of Arianne Phosphate.  “With grain prices at multi-year highs and phosphate fertilizer prices having doubled, Arianne is well-placed to advance its project towards development.  The closing of this Agreement also puts our Company on a more solid financial position, resulting in the elimination of $12.5 million of debt, a reduction in interest payments of roughly $2.5 million a year and, an extension on the maturity of its credit facility by 5 years.”

These transactions remain subject to final approval of the TSX Venture Exchange.