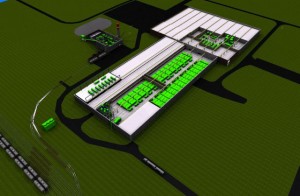 Argex Titanium Inc. (TSX: RGX) is pleased to report the results from the industrial feasibility study for its titanium dioxide (TiO2) industrial project. The Study is based on a 50,000 tonnes per year first-module production facility to be located in Salaberry-de-Valleyfield, Quebec.  GENIVAR Inc. (TSX: GNV) one of Canada’s leading professional services and engineering firms, was mandated to establish the technical viability of a TiO2 production facility and to provide a development plan and capital estimate for the project.   The delivery of the full report in final form is expected shortly.

The financial model for the first-module was prepared by Ernst & Young based on information provided to them by Argex as received from GENIVAR, vendors, service providers and other third-parties in the preparation of the Study.

The financial highlights of the Study are as follows:

“The Valleyfield project described by the Study represents extremely positive news for Argex and its shareholders. The Study’s completion is a significant milestone on the pathway to production,” stated Roy Bonnell, the President and Chief Executive Officer of Argex. “The results as outlined in this news release make a compelling case for the economic viability of the project.”

“We believe that our ability to secure project financing, which is non-dilutive to our public equity, has been greatly enhanced because of the highly positive economics contained in this Study, the TiO2 purchase agreement we have signed with PPG industries, and our expectation that Ressources Québec Inc., a subsidiary of Investissement Québec Inc., will be an important partner as we move forward. Based on our discussions to date with current institutional investors, other financial institutions and potential strategic partners, we believe a significant portion of the capital costs associated with the first module can be fulfilled at the project level, thereby minimizing dilution to our Company’s equity,” commented Mr. Bonnell.

The initial industrial module will have a capacity of 50,000 tonnes per year of TiO2 pigment production. However, it is expected that additional modules will be added at the current location where they would benefit from capital investment in infrastructure already absorbed by the first module or constructed at other locations, following the successful commissioning of the first industrial module.

“The financing of subsequent modules should benefit from better financing terms resulting from the cash-flow and reduced risks associated from the operation of the first module. We are confident that the subsequent modules represent a compelling case for future expansion,” added Roy Bonnell.

The industrial project planned location is the Perron Industrial Park in Salaberry-de-Valleyfield, Quebec where an existing 357,000 square foot industrial site has already been selected. The site is located near the Port of Valleyfield and the existing CN railway infrastructure.

The main products will be coated and uncoated TiO2 pigment mainly used for architectural paint, plastic and cosmetics applications. Commercially available sulphate-grade ilmenite concentrate has been selected in the Study as the initial feedstock for the operation. The Study demonstrates commercial by-products of significant value will be generated during the processing of the feedstock, which consequently will minimize costs associated with waste treatment and disposal.

“Argex is actively working with its vendors and consultants to improve on the already impressive results of the Study,” said Enrico Di Cesare, Chief Operating Officer and Vice President, Technology of Argex. “We will also continue to work closely with both the technology providers to optimize our construction schedule and the engineering team and equipment vendors to provide a greater level of precision on all items covered in the Study.”

During the course of the Study, Argex has identified several opportunities for further improvements in cost saving which have not been included in the present Study. These opportunities include:

“Work related to detailed engineering should start in early 2014 and permitting is already underway,” added Mr. Di Cesare. “We are closely working with equipment suppliers, construction contractors and engineers to commission the plant in the summer of 2015.”

ARGEX Titanium Inc. is a near-term producer of Titanium Dioxide (TiO2). With a primary goal of advancing rapidly towards production, Argex has adopted a simple and low-risk strategy for the scale-up of its proprietary process that allows it to produce high-purity pigment-grade TiO2 directly from run-of-mine material. The closed-loop process is environmentally friendly and produces minimal inert tailings.