Diamond drilling continues with two drills active on the property. Initial drilling has been completed at Biotite Lake and is ongoing at the WRCB zones (cumulatively the Wilson-Richard-Charles-Bell and Ivan-Dylan-Dante discoveries). Analyses from the grab and channel samples have been received and have confirmed target area potential for drilling and the company has made a new discovery at Diablo in the Western Anomaly area. Notable results also include:

Assay results from samples collected during the first phase of field exploration have been returned from the Saskatchewan Research Council’s Geoanalytical Laboratory in Saskatoon. Grab samples from the Oldman River area define a trend of approximately 175m in length, with grades ranging from 0.52% up to 3.94% TREO. Mineralization is hosted within a series of biotite-rich shear zones, with orientations that are axial-planar to folding in the area.

Channel sampling was conducted at Ermacre, Danny, Biotite Lake and Strocen zones. Composite results from these samples are shown in Table 1, with significant TREO grades ranging from 0.20% up to 6.23%. 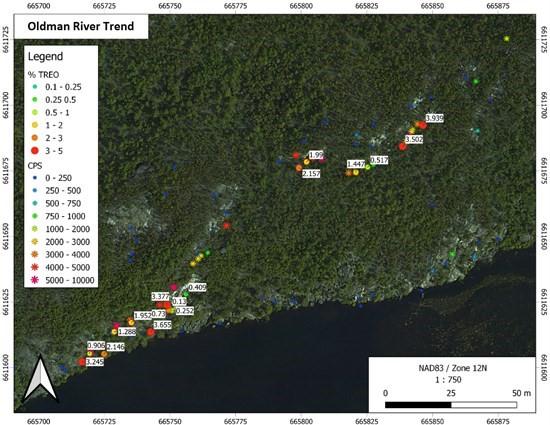 See Table 2 below for Lithogeochemical results for Individual, Total (TREO) and Critical REOs.

Approximately 7,200 metres of drilling has been planned to test the near-surface and down-plunge extents of new and existing rare-earth targets (Figure 2) and total metreage could exceed 10,000m. More than 4,000 metres is dedicated to identifying the depth potential of the WRCB zones and help complete the understanding of this significant discovery.

Preliminary drilling at Biotite Lake is complete, with metreage totalling 695m. This drill has moved to the Danny zone, with 345m of planned drilling. Metreage at WRCB has totalled 1,085m, with ~3,400m remaining on the first phase of drilling. Assay results are currently pending and will be analysed to determine further drilling requirements. Industry conditions had delayed the drilling schedule, but drilling is now on pace with previous forecasts.

The Sweet Chili Heat zone, among others (Figure 2), is a new discovery that was found as a direct result of the new airborne survey. As a result of the analysis of the geophysical data and geologic work done at the location, the SCH zone has been prioritized for drilling in the near future. Monazite mineralization has an exposed strike length of ~25m, with elevated radiation readings continuing under ground cover for an additional ~30m. Observed mineralization indicates that the SCH is a highly prospective target. 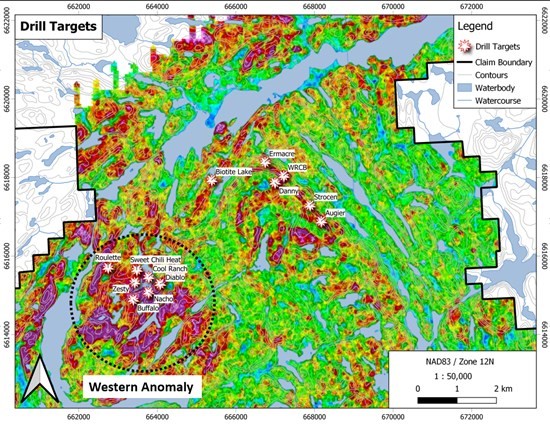 Nicolas Guest, Alces Lake Project Manager noted that “Drilling is now progressing well. We have been adding holes to follow up on promising intercepts and eagerly await the results from Biotite Lake and WRCB. Our target inventory has been growing steadily, as field teams continue to generate new areas of interest.”

The Western Anomaly has yielded additional new discoveries, including the Diablo zone (Figure 2) which is comprised of a feldspathic pegmatite, containing irregular patches of massive biotite, quartz and monazite (Figures 3 & 4). The area has been channel sampled, with assays currently pending. The Diablo zone is on the margin of a NE-SW-trending shear zone and hosted within a similarly trending, steeply plunging fold. Shearing is axial planar to folding, which is consistent with numerous occurrences across the property. 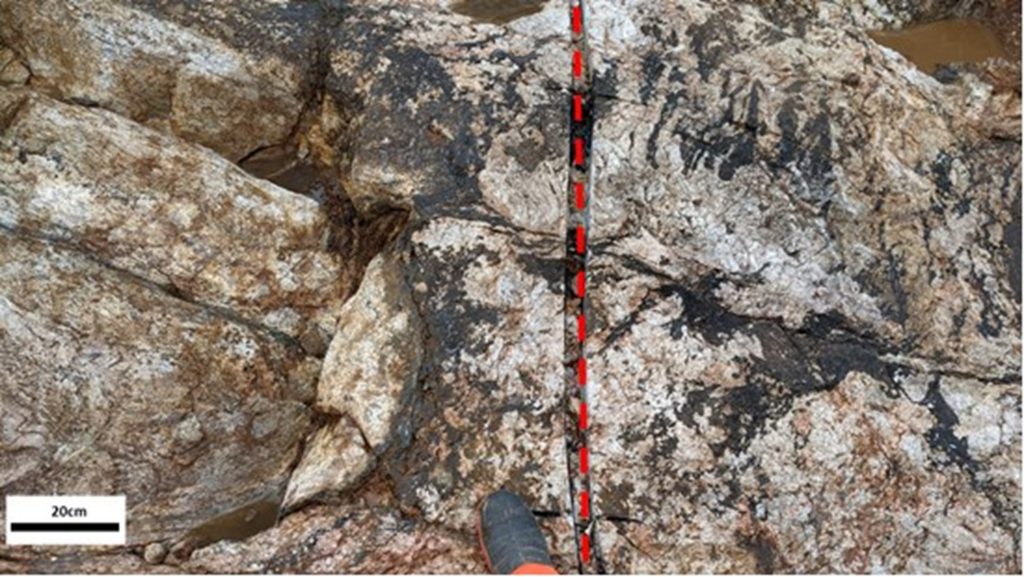 Nicolas Guest, Alces Lake Project Manager noted that “The latest discoveries in the Western Anomaly continue to demonstrate its great potential. The area is hosted within a regional isoclinal fold, with-well developed axial planar shear zones. We are excited about the exploration potential of these prospective trends and look forward to our upcoming drilling in the area starting in September.”

The Company is fully-funded for the 2021 program and all required permits for the exploration activities are in-hand.

With the largest exploration and diamond drilling program in the Company’s history now underway, exploration results will be released as received and analyzed by the company. Analysis of the summer exploration and drilling program will follow and may lead to the preparation of an NI 43-101 (Technical Report with 3D Geophysical-geological Models & Preliminary Economic Assessment) report expected near the end of 2021. The Alces Lake project encompasses some of the highest-grade total and critical* REEs and gallium mineralization in the world, hosted within a number of surface and near surface monazite occurrences that remain open at depth and along strike.

The Alces Lake project is located in northern Saskatchewan, the same provincial jurisdiction that is developing a “first-of-its-kind” rare earth processing facility in Canada (currently under construction by the Saskatchewan Research Council, it is scheduled to become operational in early 2023). The Alces Lake project area is 35,682.2 hectares (88,172.7 acres) in size and is 100% owned by Appia.

Appia is a Canadian publicly-listed company in the uranium and rare earth element sectors. The Company is currently focusing on delineating high-grade critical rare earth elements, gallium and uranium on the Alces Lake property, as well as exploring for high-grade uranium in the prolific Athabasca Basin on its Loranger, North Wollaston, and Eastside properties. The Company holds the surface rights to exploration for 83,706 hectares (206,842 acres) in Saskatchewan. The Company also has a 100% interest in 12,545 hectares (31,000 acres), with rare earth element and uranium deposits over five mineralized zones in the Elliot Lake Camp, Ontario.