I am blessed to live in Vancouver for many reasons.

One, obviously is the great beauty that surrounds the city: mountains and ocean.

Can you see where I am going with this?

Prime Mining, a silver/gold near production company in Mexico and is the culmination of capital markets acumen, geological promise, and near-term production that the market is eagerly awaiting. This is a high-grade low-cost producer in the near term! Of course, for generalist investors this might be longer than you expect but given the investment curves and horizons of mining projects, this one is on an extremely fast track.

Prime has outlined The Path Forward and that is perfect for someone like me because it gives us milestones to check against. We can hold management accountable to their plan and so far, everything has been going according to plan.

In a snapshot, Prime Mining has 37 contiguous claims covering 6,300 hectares, and is 43 kilometres from Cosala, Sinaloa. This region of Mexico has a rich mining history stemming back into the 1700s. The flagship project is Los Reyes which has a current measured and indicated in-pit oxide mineral resource for the Property of 19.8 million tonnes containing 633,000 gold ounces at 1.0 gpt and 16,604,000 silver ounces at 26.2 gpt.  Los Reyes holds substantial resource upside based on open extensions of known resources, ten kilometres of undrilled strike length and at least eight additional exploration targets. It is close to infrastructure with direct access to roads, power, water, and labor. The company has completed a 30-year surface access rights agreement to ensure continued exploration and development, as well as mining and construction. The company also holds blue sky potential with an untested new claim blocks added to the project have yet to be explored. There will be constant news flow about progress, on the direction of each milestone and the potential expansion of the resource.

If you go to Kitco and keep up to the pace of silver gaining in the past 60 days you will be impressed. 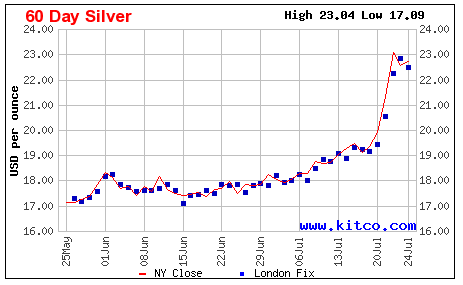 Remember Silver has been as high as $48 back in 2011! This market can move and move quickly. Knowing this silver credit for Prime Mining is important and it highlights a reason why Warren Buffet loves the metal so much: it has practical industrial application particularly with solar energy. 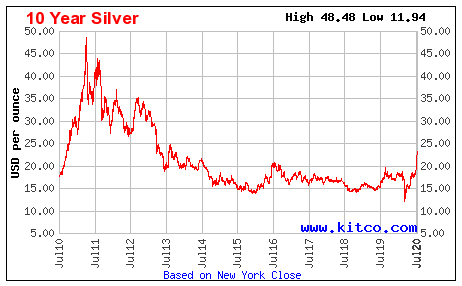 July 16, 2020 Prime Mining announced phase one of their program which is expected to cost $6 million. Prime is executing a planned 10,000-meter drilling and surface trench sampling program employing a three-pronged approach to increase and expand the current resource estimates.  The warrants in the money which can add on roughly x million. The company does not need to finance. 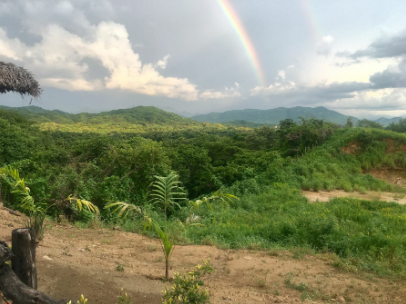 Research from the Clarus Research Desk points out that Prime Mining trades at C$90/oz, which is a staggering 40% discount to Latin American developer peers trading at an average of C$145/oz.  This indicates that there is still room for growth before hitting milestones. One of the key factors that both Prime Mining and Clarus wanted to point out as well is that open pit oxide deposits in Mexico tend to garner good valuations.

I remember seeing the mining pitch battle finals at Mines and Mines London and to me it was a toss up between Amex Exploration and Prime Mining. Both of these companies did an outstanding job and many of you know how much of a fan of Victor Cantore and Amex Exploration I am, but Andrew Bowering did a great job swaying a crowd that saw more risk in Mexico then Quebec. Amex took the win but so many people had their eyes opened to the opportunity that is Prime Mining. That day the right people were there listening as the company began its plan of attracting impeccable talent in both capital markets and the mining sector.

I am quite sure Mr. Bowering and the Prime Mining team are not looking to simply match them in market cap!

It is not easy attracting impressive management, but it is exceptionally difficult to attract some of the highlighted talent that Prime Mining has brought on. A strong indicator of the merits of the project is having Murray John, Gregory Liller and Daniel Kunz come on board.

Vice President and Chief Operating Officer Gregory Liller has over 40 years experience in mineral exploration and mine development. He has been a key factor in 7 projects which became active mines as well as the development of over 11 million ounces of gold & 600 million ounces of silver reserves and resources.

Daniel J. Kunz, Chief Executive Officer and Director of Prime Mining is an MBA and Professional engineer with over 35 years of experience in mining, constructing, and financing global resource projects. He was Former CEO of $4.2bn Ivanhoe Mines Ltd., founder and CEO of US Geothermal Inc which sold for $250M.

Murray John, Chairman of the Board was the former Chairman of Discovery Metals Corp., director of Osisko Gold Royalties, Ltd and O3 Mining Inc. He was also President and CEO of Dundee Resources Limited and Managing Director and a Portfolio Manager with Goodman Investment Counsel.

The stock is getting exceptional market response and it is quietly pushing forward with little to no coverage. There is plenty of buying and the company is obviously attracting specific knowledgeable investors. This company is hitting all the check marks of what a ‘major’ wants to see, and unlike some blue-sky projects this has exceptional recovery rates, permitting, infrastructure, and is near term. The Management and Board have material ownership of 13% and there has been no hype or promotional work. I have just been watching and hearing good things but have not been engaged by anyone at the company or employed by the company.

Now being close to other projects is icing on the cake for Prime Mining. Make no mistake being in such a rich mining region accounts not only for the geology but the ability to mine in Mexico.

Gold has been running for years now and silver has just started catching up…just in past weeks. The world is waking up to the commodity cycle and the need to invest in real material things. These building blocks of civilization come from the ground, from mining, metals, and minerals. The project has strong data and expansion potential with stock market growth despite no promotion. The management is outstanding, and we have a detailed playbook to judge our investment by. We are looking forward to the news coming out from Prime Mining in the next year.