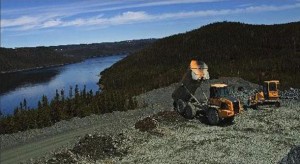 Anaconda Mining Inc. (TSX:ANX) is pleased to report that it has engaged Fugro Airborne Services to fly a helicopter-borne Electromagnetic/Magnetic survey over Anaconda’s Pine Cove property on the Baie Verte Peninsula, Newfoundland. The airborne survey has begun and is expected to be completed by the end of June with the results being available by approximately late August.

Anaconda has mineral exploration rights to approximately 4,785 hectares surrounding its Pine Cove gold mine. The area is underlain by ophiolitic and cover sequence rocks of the Point Rousse Complex which is a prolific host for gold mineralization. The Dighem EM/Horizontal Magnetic Gradiometer survey will target these rocks. The data will be used in conjunction with archived gold-in-soil geochemical data and prospecting to further delineate exploration targets. The survey will cover approximately 700 line kilometers at a flight line spacing of 75 meters.

President and CEO, Dustin Angelo, stated, “The airborne survey is an important next step in our exploration plan. The high-resolution data will aid exploration activities both adjacent to the Pine Cove mine and regionally in the search for additional gold resources.”

Headquartered in Toronto, Canada, Anaconda is a growth oriented, gold mining and exploration company with a producing asset located on the Baie Verte Peninsula in Newfoundland, Canada called the Pine Cove mine.