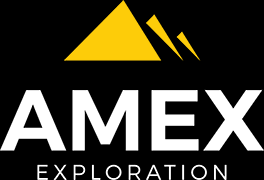 This high grade gold zone is hosted within a highly sericitized and sheared rhyolite unit of about 5-10m that corresponds very well with a similar altered rhyolite unit intersected in hole PE-2013-04 where free coarse gold within some quartz veining was also noted and values of up to 12.93 g/t Au over 0.30 meters were intersected. This specific zone was the main follow-up target of hole PE-2017-03 and was collared at about 75 meters to the East and 50 meters to the North of hole PE-2013-04. It is important to note that this gold zone is of orogenic type and is not directly related or of the same type as that the so-called discovery gold-rich VMS polymetallic mineralization intersected in hole PE-2013-03 which is located some 800 meters to the West (see PR2017-11-13).

“I am very pleased with the initial results from our first few holes of the Perron drilling program,” said Jacques Trottier PhD, Executive Chairman of Amex. “Hole PE2017-03 is intersecting what seems to be a whole new gold bearing zone at Perron and is quite separate from our VMS target which is about 1 kilometre away. A property as large as Perron, which covers an important segment of an entire greenstone belt in that region of Quebec, has the potential to host multiple gold discoveries.”

Amex has also received analytical results from hole PE-2017-01A (located in the same area) to hole PE-2017-05 (which is the deepening of hole PE-2013-04). In addition Amex has re-sampled intervals which were lacking data from the mineralized zone of hole PE-2013-04. The company is currently compiling and integrating these results and will announce them as soon as they are available.

Before the Holiday break, five drill holes were completed (holes PE-2017-01A to PE-2017-05) totalling 1,341 meters. On January 5th drilling resumed and on January 15th, hole PE-2017-06 totalling 408 meters was completed. Nine additional holes on nine different targets totalling about 2,727 meters are still planned to be drilled on the Perron property before the end of March 2018.

Nabil Tarbouche, Geologist of Explo-Logik, a Qualified Person as defined by Canadian NI 43-101, Revised and approved the geological information of the current drilling reported in this news release. The drilling campaign and the quality control program has been planned and supervised by Nabil Tarbouche and Amex’s management. The QAQC include insertion of blank, standard or duplicate every 10 samples on average. The gold value is estimated by Fire Assay (AU-ICP-21) by ALS Mineral, Val d’Or. 823 samples were submitted to ALS Mineral for gold, base metals and major and trace elements. Core Logging and sampling was realized by Lisa Côté, Trainee Geologist of Explo-Logik under supervision of Nabil Tarbouche.

Amex Exploration Inc. is a junior mining exploration company, the primary objective of which is to develop and bring into production viable gold and base metals deposits in mining-friendly jurisdictions. Amex has multiple highly prospective projects: the 100% owned Perron gold project located 110 kilometres north of Rouyn Noranda, Quebec, consisting of 116 adjacent claims covering 4518 hectares; the 100% owned Eastmain River gold properties consisting of 135 claims covering 7,102 hectares and the 100% owned Lebel-sur-Quévillon project in Quebec, comprising 263 claims covering 14,743 hectares. In addition, Amex has an option agreement to acquire a 100% interest in the Gowan Property located near the Kidd Creek Mine.