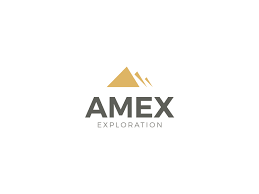 Amex Exploration Inc. (TSX-V: AMX) (FSE: MX0) (OTCQX: AMXEF) is pleased to announce the discovery of a high-grade copper rich Volcanic Massive Sulphide zone on its 100% owned Perron property located in the Abitibi region of Northern Québec. At the beginning of 2021, while continuing its definition and expansion drilling on orogenic gold targets, mainly on the Eastern Gold Zone, Amex launched a small drill program to test the base metal potential of the Perron Property given its proximity to the historic Normétal Mine that produced 10.1 Mt @ 2.15% Cu, 5.12% Zn, 0.55 g/t Au and 45.25 g/t Ag – See Figure 1. The mineralization of the Amex discovery hole is similar to that of Normetal Mine. Drill Hole PEX-21-076, intersected a disseminated, semi-massive- to massive- sulphide zone that returned:

Jacques Trottier, PhD, Executive Chairman of Amex Exploration, commented, “During my academic career I have evaluated VMS deposits around the world, including the Normétal mine next door, and I am very excited by what I am seeing here at Perron. VMS deposits are one of the richest sources of copper, lead and zinc globally and often produce economic amounts of gold and silver as by-products. In addition to the discovery hole, we have core from a follow-up drill hole PEX-21-083, located about 70 metres deeper, which is at the lab for assay and which shares the same visual characteristics and core length as discovery hole PEX-21-076.”

Trottier Continued, “Should this discovery lead to the development of a deposit it has the potential to be a company maker on its own. We are obviously very excited by this opportunity for Amex. Our VMS discovery is 100% accretive to the high-grade gold zones which we are currently drilling off at Perron and provides our shareholders and investors with exposure to highly sought-after copper-rich base metal discoveries.”

The Perron Property was explored for base metals since the 1960s by several mining companies. Drilling campaigns were mainly focused on the western caldera of the Normétal Volcanic Complex. More recently exploration focused on the Normétal Mine Sequence, which is present over more than 4.5 km within the Perron property (Figure 1).

During the re-evaluation of the VMS potential by Amex in early 2021, all historical data were compiled and re-evaluated to define the best drill targets available. The lithogeochemical data and the study of the historical logs have allowed a reclassification of the rocks and a redefinition of the stratigraphy of the Mine Sequence present on the Property. The use of major elements allowed the most altered sector of the property to be vectorized (Figure 2). A strongly sericitized alteration halo of more than 1 km of lateral extension overprints the rhyolite units while the dominantly intermediate volcaniclastics of the Mine Sequence shows a dominance of chlorite alteration. By putting this information in longitudinal section (Figure 3A), a mineralized lens was outlined on surface marked by 0.25-1.50 m thick semi-massive sulphide intersections dominated by pyrite and locally rich in Cu (e.g. historical DDH 163-15-015: 2.15% Cu over 1.50 m). Furthermore, this near-surface “semi-massive root” is highlighted by the alignment of several discrete EM anomalies (VTEM survey, Figure 2). Overall a large proportion of the historical holes showed hydrothermal alteration typical of VMS mineralization (sericite and chlorite +/- garnet) down to 750 m vertical. Zn values were intersected at depth (163-15-022 and 163-15-023 – Figure 3A) but associated with disseminations and stringers-like mineralization (absence of SMS-MS). A new interpretation, brought about in this 2021 campaign, was to define a target with a lateral extension of approximately 200 m and a 75° plunge to the east.

Discovery hole PEX-21-076, planned along this plunge, intersected a disseminated- to massive- sulphide zone that returned 2.40% Cu, 0. 72% Zn, 0.27 g/t Au and 22.15 g/t Ag over 7.80 m, including 3.92% Cu, 1.20% Zn, 0.39 g/t Au and 35.99 g/t Ag over 4.40 m, of which 0.90 m returned 6.94% Cu, 4.65% Zn, 0.30 g/t Au and 73.00 g/t Ag (see Table 1). The mineralized lens is dominated by a chalcopyrite-pyrrhotite-pyrite-(sphalerite) assemblage (Figure 4), with typical VMS metal zonation near the core with chalcopyrite-pyrrhotite-(magnetite) at the base and pyrite-sphalerite at the top. It is hosted at the interface between an intermediate ash to lapilli tuff strongly altered (pipe like) in magnesian chlorite over about ten meters (footwall) and a rhyodacitic tuff (hanging wall) of transitional to calc-alkaline affinity. The follow-up hole (PEX-21-083) also intersected this same disseminated- to massive- sulphide mineralization of similar thickness and visually as rich in copper, at approximately 70 metres deeper. This confirms the continuity of this mineralized system in terms of thickness and metal content and introduce the new discovery zone named the QF Zone. The Company is awaiting assay results on this follow-up hole and is preparing to expand upon the discovery with additional drilling. In addition, several drill holes have been pulsed (BHEM) to generate EM anomaly plates to guide our further definition of this mineralized lens which indicate possible extensions of the mineralization in all directions (see Figure 3B). Nevertheless, Amex’s exploration strategy remains focused on its Eastern Gold Zone definition and expansion program with a goal of releasing a compliant resource estimate in early 2022.

Table 1: Assay results from the QF Zone at Perron 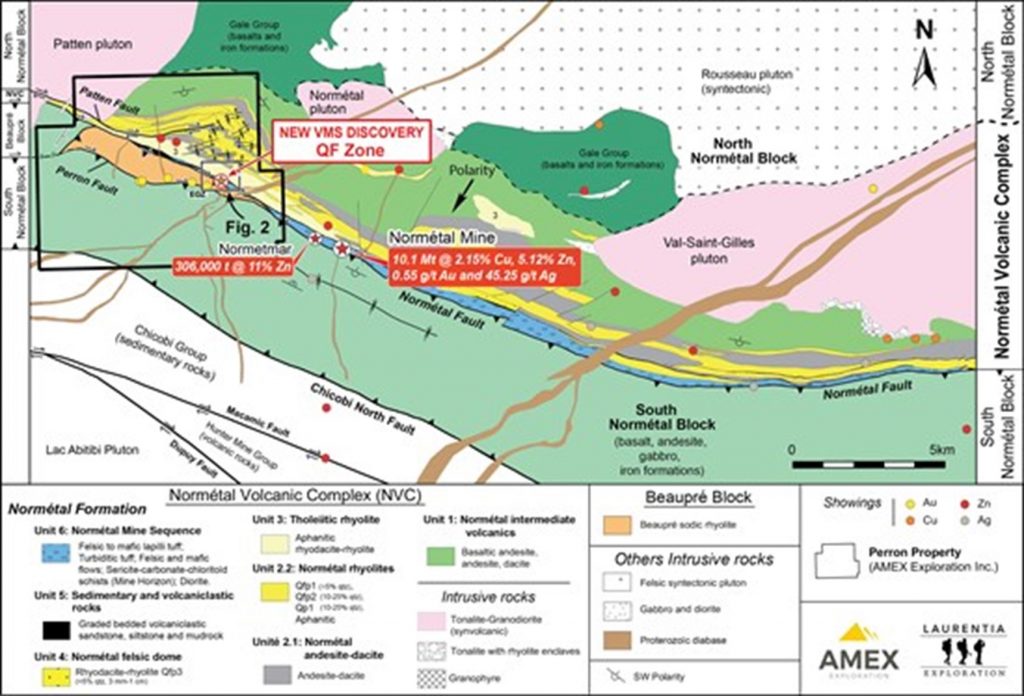 Figure 1: Geological map of the Normétal Volcanic Complex, with the location of the Perron Property and the new VMS discovery (named the QF Zone). 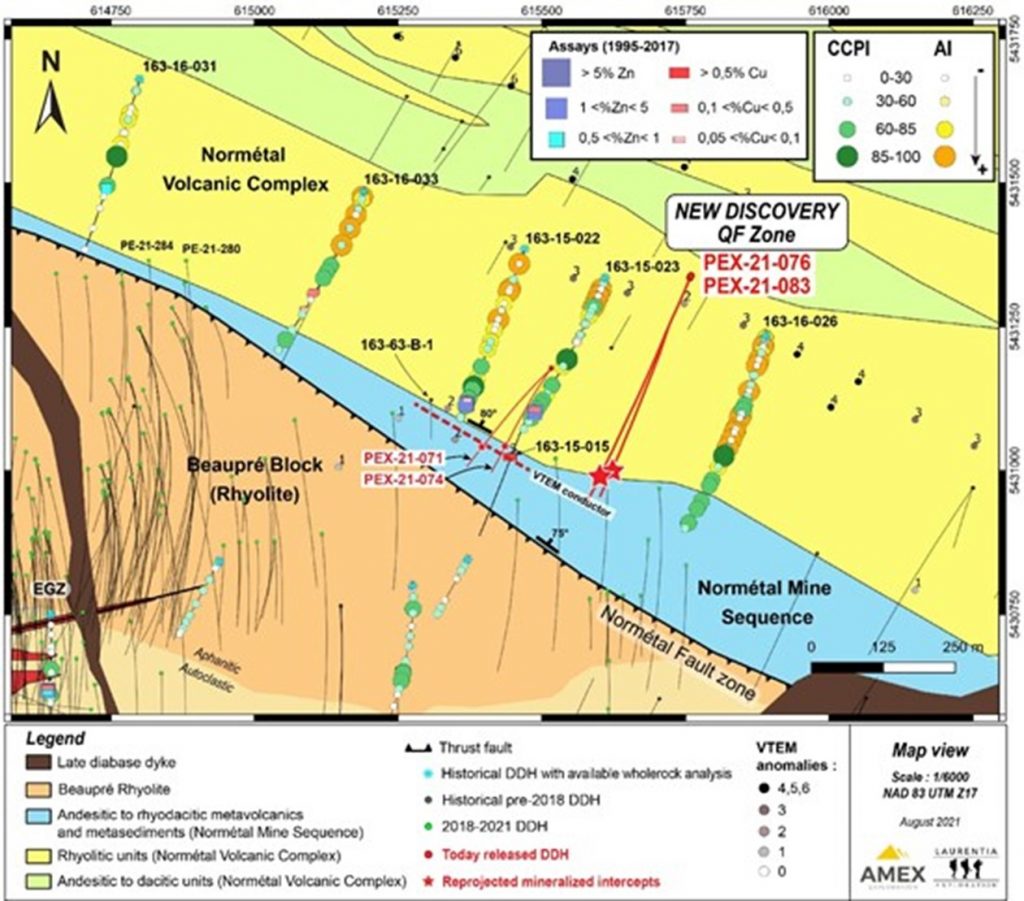 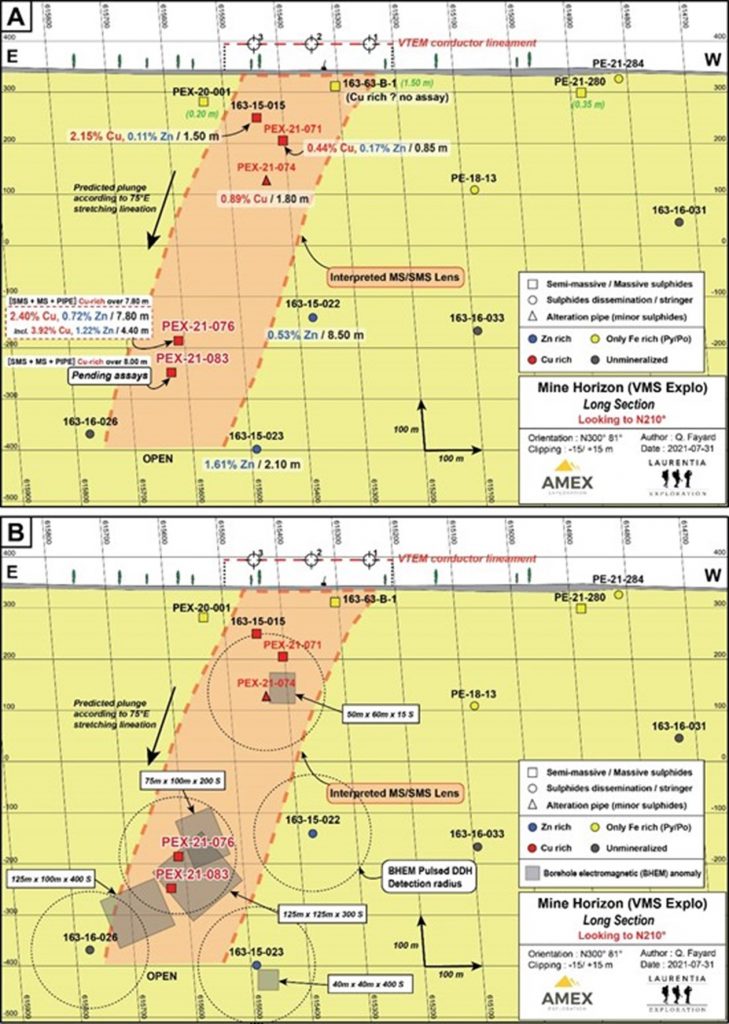 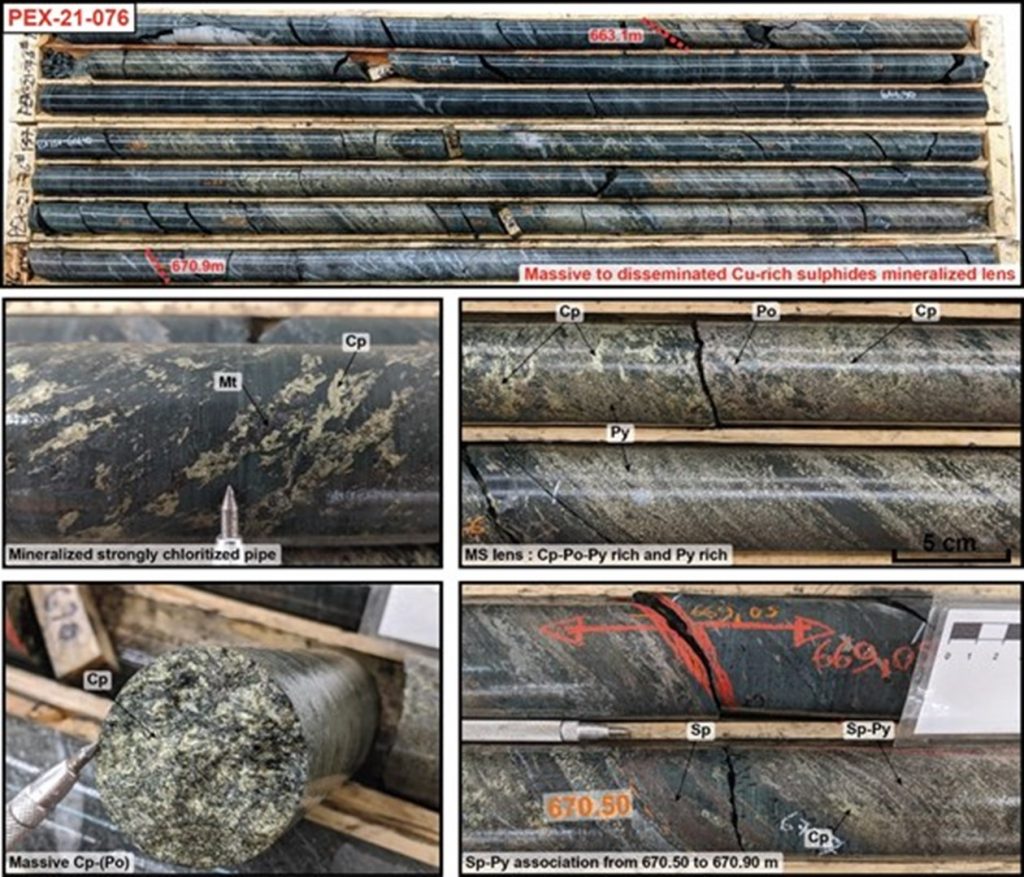 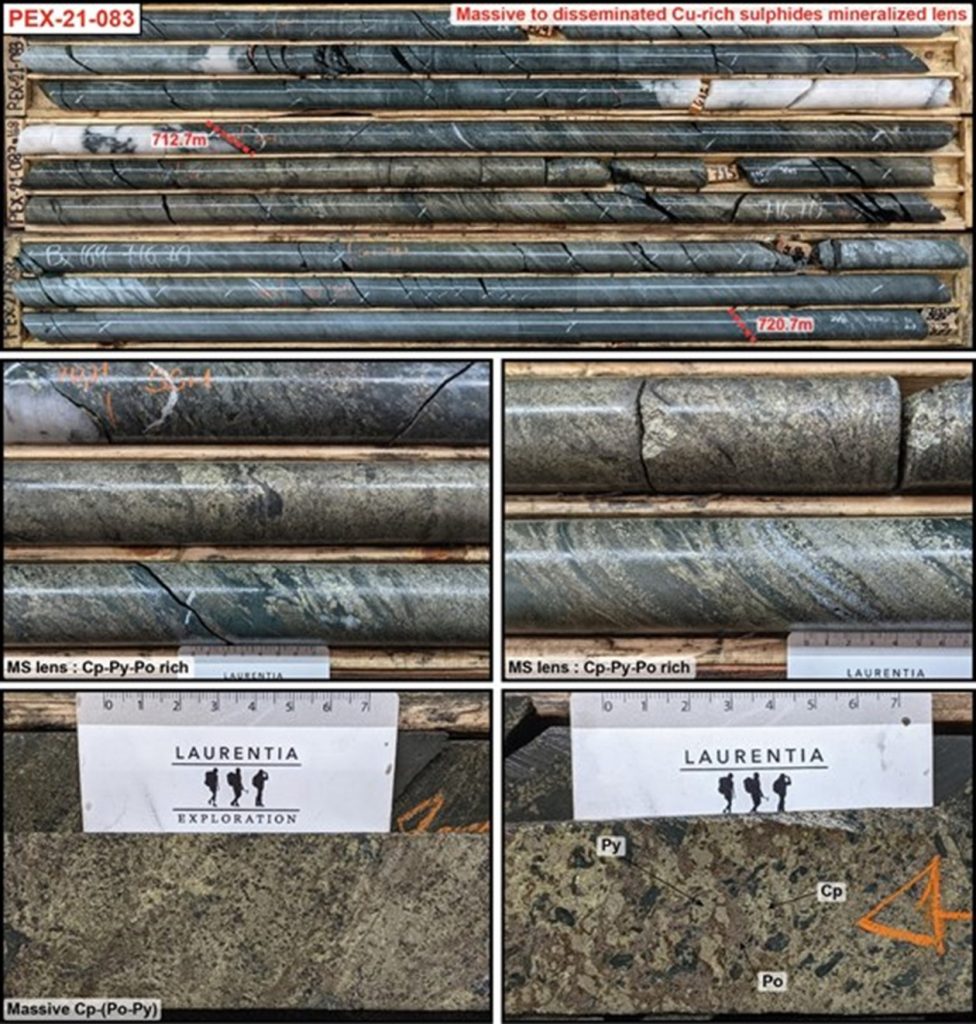 Figure 4B: Photographs of the massive to disseminated sulphides Cu-rich lens intersected in drill hole PEX-21-083.

What is a VMS Deposit?

Volcanogenic Massive Sulphide ore deposits (or VMS deposits) are one of the richest sources of base metals such as copper, lead, and zinc. VMS deposits can also produce economic amounts of gold and silver as byproducts of mining them. There are just over 900 VMS deposits worldwide. Based on these current and historical known deposits the average deposit would have a tonnage of 17 million tonnes of ore at approximately 1.7% copper, 3.1% zinc and 0.7% lead.

VMS deposits often form in clusters, or camps, following the tectonic plate boundaries in areas of ancient underwater volcanic activity. Several large VMS camps are known in Canada. In the vicinity of Amex’ Perron project, the past-producing Normetal Mine produced 10.1 Mt @ 2.15% Cu, 5.12% Zn, 0.55 g/t Au and 45.25 g/t Ag for over 50 years of mine life. The high-grade deposits within these camps are often in the range of five to 20 million tonnes of ore and can be much larger.

Maxime Bouchard P.Geo. M.Sc.A., (OGQ 1752) and Jérôme Augustin P.Geo. Ph.D., (OGQ 2134), Independent Qualified Persons as defined by Canadian NI 43-101 standards, have reviewed and approved the geological information reported in this news release. The drilling campaign and the quality control program have been planned and supervised by Maxime Bouchard and Jérôme Augustin. Core logging and sampling were completed by Laurentia Exploration. The quality assurance and quality control protocol include insertion of one blank, one standard and one duplicate every 10 samples, in addition to the regular insertion of blank, duplicate, and standard samples accredited by ALS Canada Ltd. during the analytical process. Additionally, sample weight is taken prior shipment to validate sample identity. Gold values are estimated by fire assay with finish by atomic absorption. Zinc, Copper and Silver values are estimated by four acid digestion multi elements Inductively Coupled Plasma – Atomic Emission Spectroscopy (ICP-AES), ME-ICP61. Zinc values over 1%, copper values over 1% and silver values over 100 g/t are estimated by four acid digestion ICP-AES, OG62. The Qualified Person has not completed sufficient work to verify the historic information on the Property, particularly in regards to historical drill results. However, the Qualified Person believes that drilling and analytical results were completed to industry standard practices. The information provides an indication of the exploration potential of the Property but may not be representative of expected results.

Amex Exploration Inc. is a junior mining exploration company of interest to gold investors and those looking to invest in gold exploration opportunities. Amex’s primary objective is to acquire, explore, and develop viable gold projects in Quebec Canada, a mining-friendly jurisdiction. Amex is focused on its 100% owned Perron gold project located 110 kilometres north of Rouyn Noranda, Quebec, consisting of 117 contiguous claims covering 4,518 hectares. A number of significant gold discoveries in Quebec have been made at Perron, including the Eastern Gold Zone, the Gratien Gold Zone, the Grey Cat Zone, and the Central Polymetallic Zone. High-grade gold has been identified in each of the zones. A significant portion of the project remains underexplored. In addition to the Perron project, the company holds a portfolio of three other properties focused on gold and base metals exploration in the Abitibi region of Quebec, Canada and elsewhere in the province.