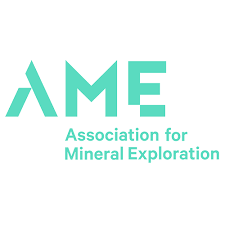 The Association for Mineral Exploration’s (AME) Roundup 2022 Conference culminated in the Awards Gala, a celebration of excellence honouring the achievements and contributions of individuals and teams from the mineral exploration industry in British Columbia, the Yukon, and further afield.  This year, the Gala on the 3rd of February saw the presentation of ten awards covering an array of accomplishments from remarkable mineral finds to high-quality outreach and education.

First on the list was the H.H. “Spud” Huestis Award for excellence in prospecting and mineral exploration.  This year’s recipient was Theodore (Ted) W. Monaro, whose contributions to the mineral industry date back over 60 year and who remains engaged through mentoring and leadership roles.  Much of Ted’s career was spent at Cominco. Ltd., where he made perhaps his most significant discovery; that of a gold occurrence in 1965 that eventually became the million-ounce Snip gold mine in British Columbia, boasting an average grade of 27.5 g/t. Also at Cominco, his structural and stratigraphic interpretation of the Kootenay Arc led directly to the discovery of the Duncan Lake zinc-lead-silver deposit, his mapping and drilling work produced the Lynx Zone in Buttle Lake, and his advocacy for polar exploration led to the development of the Polaris mine.  Ted’s move to Romanex Management in 1990 was instrumental in their subsequent success, and he remains recognised globally as an authority on carbonate-hosted lead-zinc deposits.

The E.A. Scholz Award for excellence in mine development was presented to Director, President and CEO of Victoria Gold Corp John McConnell and his team.  This was in recognition of their work in bringing the 37,000 tonne-per-day Eagle Gold Mine in the Yukon into production, which led Victoria Gold from junior explorer status to become the leading gold operator in the Yukon today.  On a technical level, Eagle is notable not just for its pre-mining resource of 3.6 million ounces, but also its novel and successful use of heap leaching in the difficult northern climate.  Victoria Gold is now the Yukon’s largest private-sector employer, with a workforce of over 500, including 25% women and 25% First Nations citizens, with an emphasis on health, safety and environmental protection.  In addition to these accomplishments, John was crucial in the establishment of the Every Student, Every Day school attendance program in the Yukon, which has raised over $1.2 million since 2012, and he works tirelessly to promote a wide variety Yukon mining industry organisations.

This year’s recipient of the Murray Pezim Award for perseverance and success in financing mineral exploration was David Harquail, in recognition of his work with what is now the Franco-Nevada Corporation.  Since joining in 1986, David contributed to its advancement from a junior explorer into a royalty operation that boasted a market cap of $3.2 billion when it was acquired by Newmont in 2001.  When Newmont spun out its royalty assets in 2008, David and the original Franco-Nevada management team took the company though, at the time, the biggest minerals industry IPO in history, worth $1.2 billion.  Since then, David’s business acumen and entrepreneurship have led Franco-Nevada to the head of the minerals investment capital industry, having provided over $5 billion in capital to 325 mining operations across diverse commodities, geographies, revenue types and project stages.  David has also made contributions to financing the minerals industry through major philanthropic donations to minerals education.

The Colin Spence Award for excellence in global mineral exploration outside BC and the Yukon was awarded to R. Bob Singh and Chris Taylor of Great Bear Resources for their pivotal role in the discovery of the multi-kilometre LP Fault gold zone at Great Bear’s Dixie property in Ontario.  They recognised the unique geological setting of the Dixie property within the prolific Red Lake greenstone belt, and took a chance on drilling into the largest, untested zone in 2019 to test a new geological model for the property.  This uncovered the LP Fault Zone, with the discovery hole intersecting 14 m at 12.3 g/t Au.  Their recognition that a deep crustal fault structure exists under the Dixie area has unlocked its gold potential, and the Great Bear team’s exploration has been systematic and data-driven as they progress the project.

The inaugural recipient of the AME Innovation Award to recognise innovation beneficial to mineral explorers was Gregory Dipple, for his research into mineral carbon sequestration in British Columbia and abroad.  Greg has been a faculty member at the University of British Columbia for 30 years, and for the last 20 years has focussed his efforts on the mitigation of climate change through the reduction of CO­2 in the atmosphere, which is a topic of great concern to the minerals industry.  Over that time, he has greatly contributed to scientific knowledge of how certain mine tailings mineralise atmospheric CO2, and his recent work has looked at direct capture of carbon dioxide into the tailings of potential nickel mines in BC.  In addition, he has served as both the Associate Dean of Research and the Head of the Department or Earth, Ocean and Atmospheric Sciences at UBC.

A Special Tribute Award was presented to Ron Bernbaum, Founder of PearTree Canada, for the architecture of the Charitable Flow-Through (CFT) financing mechanism after an amendment to the Income Tax Act in 2006.  The CFT structure allows Flow-Through Shares, a Canadian financing incentive, to be combined with a donation tax credit, reducing the after-tax cost of giving for donors and thereby incentivising increased donations.  For minerals explorers, this dramatically increased the potential sources and amounts of capital that are available, and the significance of the CFT mechanism is demonstrated by the fact that around 70% of all FTS offerings are now completed this way.  Ron also assembled a group of tax and banking professionals in 2006 to submit the structure to the Canada Revenue Agency (CRA), resulting in CRA deeming it appropriate.  In 2011, after changes to tax law, Ron re-engineered CFT and once again had it approved by the CRA.  Now, PearTree closes more than 50 financings each year, with up to $500 million per year, to the benefit of around 2,500 charities.

The Outreach Education Fund granted $20,000 to MineralsEd (the Minerals Resources Education Program of BC) in support of their delivery of the Junior Geologist virtual classroom workshop in the coming year.  This program educates students in Grades 4, 5 and 6 on the fundamentals of geology as well as the importance of the mineral exploration industry.  Students are provided with practical and engaging tools including real rocks and minerals, as well as enjoying two 1.5-hour workshops with knowledgeable presenters.

The recipient of the Robert R. Hedley Award for excellence in social and environmental responsibility was Silvana Costa, in recognition of her continuing achievements in this area.  She became renowned for her ability to engage respectfully with indigenous communities and provide advice on ESG matters during her PhD at UBC, as well as through project and consulting work during the same period, and later joined the BC Ministry of Mines, Energy and Petroleum Resources and led sustainability initiatives there.  Her advice and subsequent management at New Gold Inc. led to New Gold being recognised as an international leader in sustainability practices.  In 2013 she became the chair of AME’s new Corporate Social Responsibility Committee, and led an array of initiatives for AME under that banner.  Her subsequent roles at First Majestic Silver Corp. and Equinox Gold Corp. have seen her continue this tradition of excellence, and she has also acted as a mentor for women in the minerals industry.

The David Barr Award for excellence in leadership and innovation in mineral exploration health and safety was awarded to the Tahltan Emergency Management Committee for its extraordinary commitment to mineral exploration and mining industry health and safety, exemplified during the COVID-19 pandemic.  The committee launched a forum to facilitate industry-wide responses and supports to the pandemic, and supported a company in northwestern BC that suffered and outbreak in a manner that led to lasting improvements in COVID-19 control and protection.  In addition, it invited the BC Wildfire Service and industry partners to meet and collaborate on necessary resources, and continues to demonstrate its commitment to keeping people in northwestern BC safe.

The Frank Woodside Gold Pan Award for distinguished volunteer service to AME was presented to Michael Gray, a geologist and now mining equities analyst who has worked to keep mineral exploration in BC forefront in the mind of governments and markets.  Michael has served on the AME Executive Committee for six years, including the period 2004-2005 as President.  As President, he worked on the BC Mining Plan, which has led to a resurgence of mining in British Columbia, and supported the creation of Geoscience BC, the only non-government organisation of its kind in Canada.  He has also served as the co-chair of the Indigenous Relations Committee and as a member of various other AME committees over many years.  He still sits on the Roundup Organizing Committee.  His overall attitude and ability to describe the industry’s potential have been of great service to the AME.

Congratulations to all the award recipients, a well-deserved evening of recognition for them all!