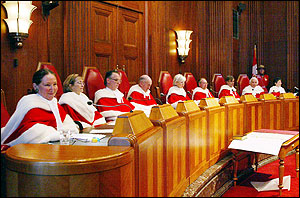 Today, the Association for Mineral Exploration British Columbia (AME BC) responded to the Supreme Court of Canada’s judgment that Aboriginal title over the land area as requested by the Tsilhqot’in Nation is granted, but that provincial laws and regulations still apply on the land.

“While this is a complex and precedent-setting case that will require further review, we at AME BC know that the path forward is for the federal and provincial governments to continue consulting with the Tsilhqot’in Nation,” stated Gavin C. Dirom, President & CEO of AME BC. “The outcome of such consultation will enable further investment from the mineral exploration and development industry that will create jobs and shared economic opportunity for all British Columbians, including the people of the Tsilhqot’in Nation. Improved certainty about title, consistent decision making processes and the application of predictable and reasonable laws and regulations are critical to successfully attracting investment to British Columbia.”

“It is important to recognize that the Supreme Court of Canada confirmed that provincial laws and regulations will continue to apply in the Tsilhqot’in Nation Aboriginal title area, subject to section 35 of the Constitution Act,” noted David McLelland, Chair of AME BC. “Government has the duty to consult with First Nations, but members of AME BC recognize that respectfully engaging with First Nations early and often creates mutual understanding, trust and respect. We have seen that mutual benefits can often occur when this approach is taken by everyone involved, including industry, First Nations and government.”

“The exploration and development of mineral claims in the area could provide real and significant economic development opportunities and long-term net benefits to the Tsilhqot’in Nation and to everyone in British Columbia,” concluded Dirom.


AME BC is the lead association for the mineral exploration and development industry based in British Columbia. Established in 1912, AME BC represents, advocates, protects and promotes the interests of thousands of members who are engaged in mineral exploration and development in BC and throughout the world. AME BC encourages a safe, economically strong and environmentally responsible industry by providing clear initiatives, policies, events and tools to support its membership.