AME BC and Cambridge House to Align International Events

AME BC and Cambridge House to Align International Events 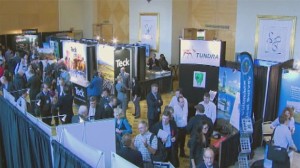 The two organizations behind Vancouver’s largest mineral exploration and investment conferences have joined forces to enrich each other’s annual conferences in January. The Association for Mineral Exploration British Columbia and Cambridge House International Inc. have reached a partnership agreement that will enhance the experience of both conferences in 2015 as well as align their dates starting in 2016.

AME BC’s Mineral Exploration Roundup conference and Cambridge House International’s Vancouver Resource Investment Conference each attract thousands of explorers, developers and investors from around the world each January. Historically, the dates have been planned independently of each other. However, starting in 2016, the dates will be aligned with each other. “AME BC’s members and Roundup conference delegates, many of whom are from across Canada and around the world, will see great benefits in having the two conferences aligned with each other,” explains Gavin C. Dirom, President & CEO of AME BC. “Aligning the conference dates just makes good sense for all delegates. This coordinated approach will simply provide more value to the delegates and increase their opportunities to showcase and network, which are important and fundamental objectives of both conferences. ”

“The Vancouver Resource Investment Conference and Mineral Exploration Roundup are known for their high-quality technical and financial talks, special forums and exhibitor shows,” notes Jay Martin, President, Cambridge House International Inc. “We are excited to work with AME BC to develop a program to bridge our respective events in 2015, and to host back-to-back conferences starting in 2016.”

AME BC is the lead association for the mineral exploration and development industry based in British Columbia. Established in 1912, AME BC represents, advocates, protects and promotes the interests of thousands of members who are engaged in mineral exploration and development in BC and throughout the world. AME BC encourages a safe, economically strong and environmentally responsible industry by providing clear initiatives, policies, events and tools to support its membership.