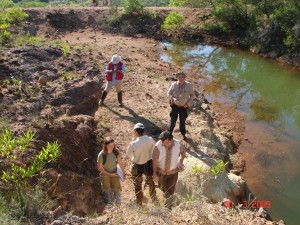 Amarillo Gold Corp. (TSX VENTURE:AGC) is pleased to announce that results of our geotechnical program have been received as part of the feasibility study underway on the Posse gold deposit at the Mara Rosa Project, Goias State, Brazil.

The results of the geotechnical study show that the footwall slope can safely be increased compared to the nominal 40 degrees slope used in the pre-feasibility study, (see PFS NR filed in January 2012), provided the mining is carried out with adequate dewatering and normal pit slope monitoring. The results of the geotechnical study suggests that a 65 degrees batter angle and an Inter Ramp Slope Angle of up to 48 degrees could be used on the footwall, while remaining well within satisfactory safety factors, (minimum factor of safety (FOS)) of 1.3 in the static case and 1.0 in the dynamic case).

This implies that mining can be conducted approximating the angle of inclination of the orebody, thereby avoiding removal of barren rock “behind” the ore body as was assumed in the PFS study. If all other assumptions in the PFS remain fixed, this represents a decrease in strip ratios from 8:1 used in the PFS to approximately 6.5:1.

Buddy Doyle President/CEO said, “These results are very significant to Amarillo, as they result in a smaller strip ratio and therefore less cost and a smaller mine foot print. Or, if optimisation studies using this new footwall pit slope allow for a deeper pit, (similar strip to the PFS). The steeper pit slope would instead then translate to more gold being recovered. Either outcome is good for the project.”

Mr. Doyle also commented, “Amarillo’s strategy has been to focus on those tasks within feasibility study that can best enhance the economics of the project. This geotechnical study is one example; the drilling in the saddle zone (see gold results NR announced In February 2013) is another. We have also been pursuing the permitting of the project and land access/purchase agreements. The Company has also commissioned a new independent resource estimate for the project and once that is in hand, a new pit optimisation and scheduling studies can start. All are key logical steps towards completing an enhanced feasibility study.”

The geotechnical program reported here, was commissioned by Amarillo and conducted under the guidance of Adam Beer, a Fellow of the Geological Society of London, who is an independent geotechnical engineer with over 23 years experience and a principal geotechnical consultant for Coffey Mining International. Six holes drilled specifically for the geotechnical study were completed during 2012. The geotechnical holes were drilled in totally unique directions compared to the bulk of the previous drilling which was designed to define the orebody. Two drill holes were drilled parallel to the footwall into footwall rocks in the zone of the proposed footwall pit slope, and the remaining 4 drill holes were drilled with westerly azimuths from the hanging wall, to complete in the footwall (all previous holes were drilled to the SE). For reference, the Posse orebody is oriented NE and dips on average at 47 degrees to the SW. All the core was oriented, logged, and the rock mass properties Rock Quality Designation, Rock Mass Rating and discontinuity data were added to the existing RQD database. Adam Beer also selected a series of samples from the core for standard geotechnical tests at the AMMTEC laboratory in Perth Australia. All work was completed to the appropriate ISRM/ASTM/NZ/AS standards. The results were reviewed and interpreted by Dr. Beer and his team, with the aid of computer modelling.

Amarillo expects the new resource estimate within the next few weeks at which stage it plans to tender for an engineering group to do the new pit optimisation and scheduling work.

Frank Baker, a metallurgist with over 30 years experience and also a member of the AUSIMM and IOM3 is the qualified person for this news release as per the guidelines of the NI-43-101. Mr. Baker is the manager of the Mara Rosa Project. Adam Beer reviewed and approved the geotechnical component of this news release.

Amarillo Gold Corp. is focused on acquisition, discovery, and definition of gold resources in Brazil. The Company’s principal projects are the Mara Rosa Project in the state of Goias, and the Lavras do Sul Project in the state of Rio Grande do Sul. The Posse Deposit at Mara Rosa contains 1,174,900 ounces of measured and indicated gold contained in 20.85 MT at 1.75 g/t Au, and 156,400 ounces of gold inferred from 3.63 MT at 1.38 g/t Au (0.5 g/t cut-off grade) (NI 43-101 compliant resource as independently determined by Australian Exploration Field Services Pty. AEFS). The Mara Rosa Gold Project has received a positive economic assessment from a Pre-feasibility study and is preparing to proceed to a bankable feasibility study. Should this continue to be positive it would be possible to commence mining by 2014.

The Posse Deposit was successfully mined by Western Mining Company (WMC) during the 1990s (mined areas are excluded from the above-stated resource figures), and is located in an area of excellent infrastructure: approximately 35 km NE of Yamana’s Chapada open pit Cu-Au operation, some 80 km NE of Yamana’s Pilar Au project (in Feasibility), 95 km NW of Votarintim’s Niquelandia Ni laterite mine, 105 km from NE of Serra Grande’s underground Au mine, and 105 km NNW of Anglo American’s Ni laterite project at Barro Alto.

The Lavras do Sul Project is an advanced exploration stage property (190 sq. km.) comprising more than 19 prospects centred on historic gold workings, with encouraging gold mineralization discovered and defined by more than 16,000 metres of drilling. The initial resource estimate at the Butia prospect reported 215,000 ounces of gold indicated from 6.4 MT at 1.05 g/t Au, and 308,000 ounces of gold inferred from 12.9 MT at 0.74 g/t Au using a0.3 g/t cut-off grade in a NI 43-101 compliant resource as independently determined by Atticus Consulting 2010. Lavras do Sul is also located near excellent infrastructure. The Company also has a portfolio of earlier stage projects and all properties under Amarillo’s management are located in areas of good infrastructure and mining-friendly communities.