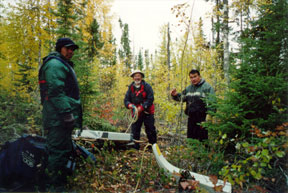 Alto Ventures Ltd. (TSX VENTURE:ATV) is pleased to announce that it has increased the land position of its 100% owned Oxford Lake Property to approximately 35,300 hectares. The increase was facilitated by the granting to Alto of a new Mineral Exploration License by the Government of Manitoba adjoining to the Company’s existing property. The acquisition of this new MEL enhances the potential for discovery of both gold and gold-silver-copper-zinc massive sulphide mineralization in several areas on the Oxford Lake Project
Cat Eye Bay
The new MEL hosts several historical gold-base metals showings in the Cat Eye Bay area of Oxford Lake. Previous work was limited to prospecting, trenching and completion of several shallow diamond drill holes in the 1970’s. Results from the historical drilling were encouraging and include 9.3 g/t gold, 89.5 g/t silver and 4.4% zinc over 0.52m as well as 10.63 g/t gold and 27.4 g/t silver over 0.5m respectively. A grab sample from one of the historical surface trenches collected during Alto’s property visit in 2012 confirmed the gold-base metals mineralization with assays of 4.1 g/t gold, 24 g/t silver, 1.1 % copper and 3.9% zinc. The grab sample was taken from an overgrown trench and contained massive sulphides (pyrite-chalcopyrite-sphalerite). This area lay dormant since the 1980’s and is under-explored.
Rusty Deposit and Blue Jay Zone
The mineralization at Cat Eye Bay combined with the other significant gold and base metals occurrences confirm the Oxford Lake project to be highly prospective. Some of the other occurrences include the Rusty Gold Deposit with reported Historical Resources(i) of 800,000 grading 6 g/t gold as well as gold mineralization drilled by Alto Ventures in 2012 in the Blue Jay area located 2.2 km east of the Rusty Deposit. Hole RUS12-03 intersected several gold zones including two with high grades; Zone One – 2.7 m averaging 6.7 g/t gold including 22.5 g/t gold over 0.5 m and Zone Two – 6.8 m averaging 5.7 g/t gold including 11.7 g/t gold over 1.6 m and 16.5 g/t gold over 1.0 m Gold in these occurrences is associated with banded iron formation and mineralization is open along strike and depth.
Hyers Island
The Hyers Island area is located near the southwest end of the property and occurrences of gold and massive sulphide copper mineralization are reported from historical work, including a historical deposit reported to contain 360,000 tonnes of mineralized material averaging 2.56% copper. The historical copper deposit is not owned by Alto but the Company’s property surrounds it.
The Company is planning a small surface sampling program in 2013 to located and sample some of the historical mineral occurrences.

.
About the Rusty Gold Zone Deposit
The Rusty Gold Zone hosts a Historical Resource(i) of 800,000 tonnes at an average grade of 6 g/t and contains approximately 154,000 of gold. The mineralization was drilled to a depth of 600 metres by Noranda and is open along strike and to depth. The resource was estimated in 1990 and a Qualified Person (QP), as defined by NI43-101, has not done sufficient work to classify this historical estimate as current mineral resources. Alto is not treating the historical estimate as current mineral resources, as defined by NI43-101, and thus the historical estimate should not be relied upon. The Rusty Gold Zone is associated with a banded iron formation and is one of several significant gold occurrences associated with a regional trend of aeromagnetic “High” anomalies. This aeromagnetic trend, which extends for 30 km in the northern half of Alto’s Oxford Lake property, is interpreted to be the geophysical signature of the BIF that hosts gold mineralization.
About the Oxford Lake Project
The 35,296 ha Oxford Lake gold property is located in central Manitoba, approximately 150 km southeast of Thompson. Geologically, the property lies in the Oxford Lake-Knee Lake greenstone belt near the west end of the Superior Province of the Canadian Shield. The Oxford Lake property lies along a major regional structural corridor that hosts the pre-development Monument Bay Gold Deposit near the eastern end of this corridor. The Monument Bay Deposit hosts reported resources of 1.04 million ounces of gold in the Indicated and Measured categories plus 1.72 million ounces in the Inferred category (see Mega Precious Metals Inc website) and is located approximately 150 km east of the Oxford Lake project. This corridor is relatively under-explored and could be an early stage analogue to the large gold-producing Destor-Porcupine or Larder-Cadillac corridors in Ontario and Quebec.

About Alto Ventures Ltd
Alto Ventures Ltd. is an exploration and development company with a portfolio of highly prospective Canadian gold and base metals properties. The Company is active in Quebec in the Abitibi greenstone belt on the Destiny gold property and in Ontario, exploring in the Beardmore-Geraldton gold belt. In Manitoba, the Company is focused on the gold and base metals potential of the highly prospective but relatively under-explored Oxford Lake property