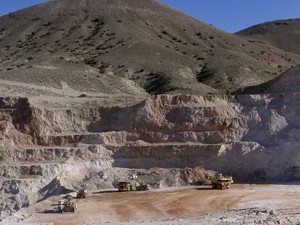 Allied Nevada Gold Corp. (TSX:ANV)(NYSE Amex:ANV)(NYSE MKT:ANV) announces today that it has closed its previously announced bought deal equity financing, with a syndicate of underwriters, led by Dundee Securities Ltd. and including Cormark Securities Inc. In connection with the closing, a total of 14,000,000 shares of common stock of the Company were issued, at a price of US$10.75 per share for aggregate gross proceeds of US$150,500,000.

The Underwriters have the option, exercisable in whole or in part at any time up to 30 days after the closing of the offering, to purchase up to an additional 2,100,000 shares of common stock at a price of US$10.75 per share. In the event that the over-allotment option is exercised in its entirety, the aggregate gross proceeds of the offering to the Company will be US$173,075,000.

The Company intends to use the net proceeds of the offering to fund capital expenditures at its Hycroft Mine and for general corporate purposes.

The Financing was offered in Canada by way of a short form prospectus which was filed in all provinces of Canada, other than Quebec, pursuant to National Instrument 44-101 – Short Form Prospectus Distributions, and were also sold in the United States pursuant to a prospectus supplement to a shelf registration statement of the Company, which was filed with the U.S. Securities and Exchange Commission pursuant to Rule 424(b) under the U.S. Securities Act of 1933, as amended.