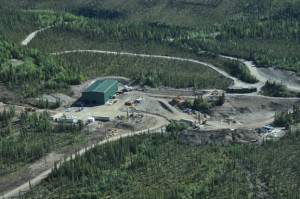 Alexco Resource Corp. owns and operates the Bellekeno silver mine, one of several mineral properties held by Alexco which encompass substantially all of the historical Keno Hill Silver District located in Canada’s Yukon Territory. Bellekeno, which commenced commercial production at the beginning of calendar year 2011, is Canada’s only operating primary silver mine. The Keno Hill Silver District lies within the traditional territory of the First Nation of Na-Cho Nyak Dun which has a fully settled land claim agreement with the Government of Canada and the Yukon, and Alexco operates within the District under a comprehensive cooperation and benefits agreement with the First Nation. Alexco’s primary near-term exploration objective is to unlock value in the silver-rich Keno Hill District, and is focused on growth by advancing its promising District properties to development decisions. The Company’s goal is to produce 7 million to 10 million ounces of silver annually within the next decade. Employing a unique business model, Alexco also provides mine-related environmental services, remediation technologies and reclamation and mine closure services to both government and industry clients through the Alexco Environmental Group, its wholly-owned environmental services division.