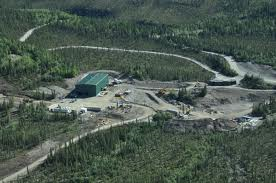 Alexco Resource Corp. (TSX:AXR) (NYSE MKT:AXU) today announces the release of a National Instrument 43-101 compliant Preliminary Economic Assessment for the eastern portion of its 100% owned Keno Hill Silver District in Canada’s Yukon Territory. The PEA, which was compiled by SRK Consulting (Canada) Inc. with contributions from a team of qualified persons, assesses an expanded operations phase of silver, lead, zinc and gold production in the Eastern Keno Hill Silver District. The study is focused on construction and operation of a new underground mine and ancillary production facilities at the recently defined Flame & Moth silver deposit and consolidates supplemental production initially from the Bellekeno mine and subsequently from the Lucky Queen deposit. The document also includes a revised resource statement for the Bellekeno deposit. The PEA reflects one of a number of production strategies considered, and work is ongoing to optimize the EKHSD plan inputs. Alexco is also considering an expanded surface exploration program in the EKHSD area.

Alexco’s President and Chief Executive Officer, Clynt Nauman, said, “Earlier in 2013, in the face of declining silver prices and reduced operating margins, we elected to suspend winter operations at our Bellekeno mine and mill facilities at Keno Hill. We did so with the knowledge that we had a rapidly growing silver resource at our recently defined Flame & Moth deposit, and that a revised operations strategy was required to integrate production from known and previously developed deposits (i.e. Bellekeno, Lucky Queen) with the new and larger but as yet undeveloped Flame & Moth deposit. In addition, simple economics drive us to fully utilize our mill capacity when re-initiating silver production. To do that, the PEA outlines a strategy to initiate development of the Flame & Moth mine in 2014 as a first step to achieving commercial production from this deposit in 2015. Meanwhile, we would begin recommissioning the Bellekeno mine later in 2014 and have it ready to simultaneously go into production along with Flame & Moth near the beginning of 2015. Bellekeno production would eventually be replaced by higher grade, lower volume silver production from the Lucky Queen mine in 2017.”

Nauman continued, “By following this plan, we would also retain short term optionality to accelerate Bellekeno production or development at Lucky Queen should conditions warrant in 2014. Concurrently in 2014, we intend to mobilize an expanded exploration program to evaluate previously identified extensions to the Flame & Moth deposit. With 23 million ounces of silver already indicated in resource, the Flame & Moth deposit is the third largest silver deposit discovered at Keno Hill in the last 50 years, and remains open. In my view, when ultimately delineated this deposit will become the cornerstone asset of Alexco’s operations in the District, with the potential to anchor future production into the 2020s.”

Key PEA metrics and assumptions are as follows:

The PEA contemplates an initial development and construction period beginning in the second quarter of 2014, with startup of commercial production in the second quarter of 2015. Commencement of development and construction remains dependent on Alexco making a development decision, which would be dependent on a number of factors, including but not limited to expectations regarding market prices for silver, lead, zinc and gold as well as the US-Canadian dollar exchange rate, and the availability of development capital. Additionally, a production decision which is made without a feasibility study of mineral reserves demonstrating economic and technical viability carries additional potential risks which include, but are not limited to, the risk that additional detailed work may be necessary with respect to mine design and mining schedules, metallurgical flow sheets and process plant designs, and the inherent risks noted above pertaining to the inclusion of approximately 6% inferred mineral resources in the mine plan.

The Bellekeno Mine achieved commercial production under Alexco ownership in January 2011. In the period from January 2011 until August 2013, the mine produced 223,552 tonnes of ore with an average grade of 768 gpt Ag, 9.2% Pb and 4.9% Zn, producing 31,838 tonnes of lead concentrate and 16,036 tonnes of zinc concentrate. Metal recoveries to concentrate over the 32-month operating period were 5.58 million ounces of silver, 44.96 million pounds of lead and 16.34 million pounds of zinc.

The Bellekeno mineral resource estimate has an effective date of May 31, 2012, based on a mine survey documenting mining progress up to that date.

As noted by SRK pursuant to Alexco reports, since the effective date of the Bellekeno deposit mineral resource statement, actual tonnes processed from the Bellekeno Mine totalled 124,000 tonnes at average grades of 701 gpt silver, 8.3% lead and 4.3% zinc (from June 1, 2012 to the temporary suspension of operations on September 1, 2013).

The Alexco mill facility has a nameplate capacity of 407 tonnes per day and employs conventional crushing, grinding, differential flotation and dewatering processes to produce a lead concentrate, a zinc concentrate and a filtered tailings product for storage in an established dry stacked tailings facility. Silver and lead minerals are recovered together in the silver-lead bulk concentrate and zinc minerals in a separate zinc concentrate.

Prior to resumption of concentrate production in 2015, an additional 1.8 meter x 3 meter, 130kW ball mill will be retrofit to provide expanded grinding capacity ahead of the flotation circuit.

Metallurgical recoveries in the PEA were determined by SRK using a combination of historical performance and test work from each of the deposits slated for production in the EKHSD project.

All of the regulatory approvals required for mining activities associated with the Bellekeno and Lucky Queen deposits are currently in place. Preliminary mine planning has been completed for the Flame & Moth deposit, and permitting for development and production from the deposit is underway.

In terms of infrastructure, the EKHSD project is supported by an already established modern camp with capacity for approximately 150 people. The project is on the Yukon electric grid and is serviced by all-weather roads. Concentrates are shipped in sealed aluminum containers by road to the Port of Skagway in Alaska and transloaded to southbound tug and barge service for ultimate delivery to smelter facilities.

The PEA reflects one of a number of production strategies being considered by Alexco. Work is ongoing to optimize various aspects of this project, including a careful review of underlying fixed costs and existing third party arrangements. As with most smaller, higher grade deposits, consolidated mine economics are sensitive to commodity price, the tenor and grade of ore delivered to the mill, and efficiency with which the mill operates. At Keno Hill, achieving and maintaining proper mine output and mill throughput is also paramount and Alexco is continuing to investigate specific production strategies to further improve the efficiency of mine and mill operations.

An equally important Company objective is to continue expansion of the Keno Hill silver resource inventory through exploration, a strategy which has met with considerable success and remains unchanged from prior years.

The PEA has been prepared in compliance with National Instrument 43-101 – Standards of Disclosure for Mineral Projects (NI 43-101), and was compiled by SRK Consulting (Canada) Inc. with contributions from a team of Qualified Persons as defined by NI 43-101. The Bellekeno resource estimate update has been completed by David Farrow, P.Geo. (BC), of GeoStrat Consulting Services Inc., a Qualified Person independent of Alexco, based upon data that was reviewed, verified and compiled by Laura Battison, P.Geo., former Senior Mine Geologist with Alexco and also a Qualified Person. The mineral resource is classified following the Canadian Institute of Mining, Metallurgy and Petroleum (CIM) Definition Standards for Mineral Resource and Mineral Reserves (December 2005), in accordance with the CIM Estimation of Mineral Resources and Mineral Reserves Best Practice Guidelines and with NI 43-101 guidelines. An NI 43-101 compliant technical report is in the process of being prepared in support of the PEA and Bellekeno mineral resource update, which Alexco expects will be filed on SEDAR no later than 45 days from the date hereof.

The disclosure of scientific and technical information about Alexco’s mineral projects contained in this news release has been reviewed and approved by Ken Reipas, P.Eng., Principal Mining Engineer with SRK, Mr. Farrow and Ms. Battison.

Alexco Resource Corp. owns the Bellekeno silver mine, one of several mineral properties held by Alexco which encompass substantially all of the historical Keno Hill Silver District located in Canada’s Yukon Territory. Bellekeno, which commenced commercial production at the beginning of calendar year 2011, was Canada’s only operating primary silver mine from 2011 to 2013. Alexco recently announced a suspension of operations at Bellekeno in order to decrease costs and reposition the District for long-term, sustainable operations. The Keno Hill Silver District lies within the traditional territory of the First Nation of Na-Cho Nyak Dun who have a fully settled land claim agreement with the Government of Canada and the Yukon, and Alexco operates within the District under a comprehensive cooperation and benefits agreement with the First Nation. Alexco’s primary near-term exploration objective is to unlock value in the silver-rich Keno Hill District, and is focused on growth by advancing its promising District properties to development decisions. Employing a unique business model, Alexco also provides mine-related environmental services, remediation technologies and reclamation and mine closure services to both government and industry clients through the Alexco Environmental Group, its wholly-owned environmental services division.

Between 1921 and 1988, the Keno Hill Silver District was a world-class silver producer, with more than 217 million ounces of silver produced at average grades of 40.5 ounces per ton silver, 5.6% lead and 3.1% zinc (Yukon Government’s Minfile database). These historical production grades would rank Keno Hill in the top 3% by grade of today’s global silver producers.