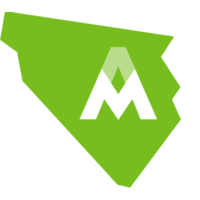 Tethyan Resource Corp. (TSX-V: TETH) is pleased to announce the execution of a binding letter agreement pursuant to which Adriatic Metals PLC (ASX: ADT) (LON: ADT1) will acquire 100% of the issued share capital of Tethyan, by way of a Plan of Arrangement under the Business Corporations Act (British Columbia), and has provided funding to complete the first closing of the previously announced EFPP d.o.o acquisition. Tethyan and Adriatic are at arm’s length to each other.

“We are excited that our assets will soon be part of the Adriatic story. Adriatic Metals has built an excellent reputation in the Balkans based on their development capability and positive engagement with local stakeholders. We are confident that the combined assets and team will go forward to bring high quality assets to production in a timely and sustainable manner, ensuring lasting benefits for both our shareholders and the communities in which we operate.”

“Tethyan Resource Corp. have been successful in consolidating the Raska district in Serbia, and with the recent addition of the Kizevak and Sastavci licenses, the acquisition presents a unique opportunity for Adriatic to add assets to our portfolio that have the potential, over time, to match the quality of our exceptional Vares Project in Bosnia.”

“In a short time, Adriatic has built a significant presence in the region, by developing our assets with a very competent team at the helm. Applying our team and strong balance sheet to Tethyan’s assets positions us well to proceed through the project development cycle.

“These are past producing mines, and the historical data we have reviewed provides ample confidence that we are adding significant value to our portfolio. I look forward to working with Fabian and his team over the coming months to close the transaction and demonstrate the potential of these assets.”

The Transaction will give Tethyan shareholders the ability to participate in the enlarged Adriatic as the leading Balkan polymetallic explorer and developer with four key projects (Rupice, Veovaca, Kizevak & Sastavci) covering a total land package in excess of 301km2 across Bosnia and Serbia (Figure 1). The Transaction allows Tethyan shareholders to retain upside to the Kizevak and Sastavci Projects whilst increasing the pace of development as Adriatic brings its strong balance sheet (cash of A$23.8 million and no debt as at 31 March 2020) and its experienced project development team to rapidly progress the projects. 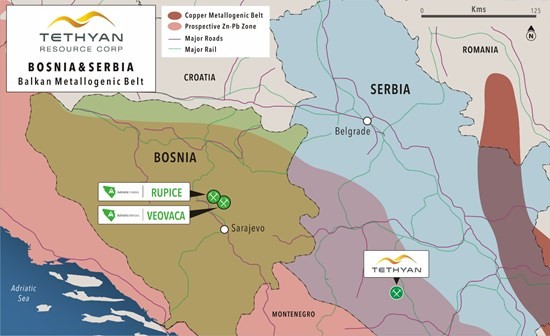 Adriatic holds a 100% interest in the Vares Project in Bosnia & Herzegovina, which comprises the historic open pit mine at Veovaca, and brownfield exploration at Rupice situated 12 kilometers to the northwest of Veovaca.

In November 2019 Adriatic announced the results of a JORC-compliant Scoping Study, following the release of a Maiden Resource Estimate earlier in the year. Adriatic is now rapidly developing the project, intending to complete a JORC compliant Pre-Feasibility Study during 2020.

Additionally, Adriatic has attracted a world class team to both expedite its exploration efforts at the high-grade Rupice deposit and to rapidly advance the project into the development phase utilising its first mover advantage and strategic position in Bosnia.

The Transaction enables Tethyan to proceed to close the acquisition of EFPP d.o.o. (refer to Tethyan News release dated April 1, 2020), the holder of parts of the Kizevak and Sastavci deposits, and commence drilling at Kizevak.

Kizevak is a past-producing mine reported to host considerable historic silver, zinc and lead mineral resources. Drilling by Tethyan in 2018, 1 kilometre along strike from the historic open pit mine, intersected high-grade mineralisation including 12 metres at 22.03% Zn, 10.49 % Pb, 167g/t Ag and 0.18g/t Au (refer to Tethyan’s news release dated 4th September 2018). Historic records show that the entire corridor between the old Kizevak open pit and Tethyan’s recent drilling is mineralised (Figure 2).

At Kizevak, there have been at least 116 holes drilled, totalling 14,951.1m (Figures 2 & 3). There are also an additional 7,820m of underground exploration workings. The mine was operated as an open pit by the Serbian State between 1984 and 2000, ceasing operations due to conflict in the region. The project benefits from numerous infrastructure advantages including water, power, road and rail access all within five kilometres, and a local workforce with a long history of mining. Additionally, the land comprising the wider project area is designated for mining purposes under the Serbian State spatial plan, providing many permitting benefits and efficiencies. 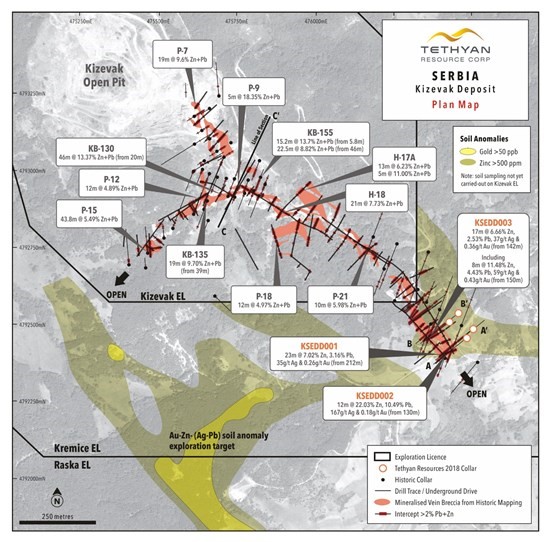 Figure 2: Plan map of Kizevak with significant historical drilling and underground channel sampling intercepts, and Tethyan 2018 drillhole intercepts. True widths are not known. The qualified person has not verified the historical sampling and assay data disclosed in this release, including sampling data and assay results. These data come from historical reports made between 1970 and 1984 by the Serbian Geoinstitut. 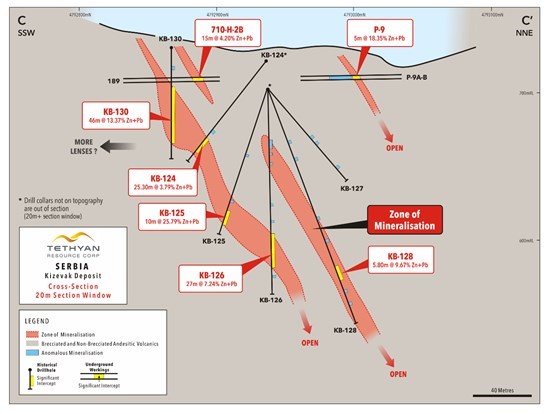 Figure 3: Cross-section in the central part of Kizevak showing historical drill and underground channel sample results and steeply dipping mineralised lenses within andesitic volcanics. Historical significant intercepts are >2% Pb+Zn. True widths are not known. The qualified person has not verified the historical sampling and assay data disclosed in this release. These data come from historical reports made between 1970 and 1984 by the Serbian Geoinstitut.

Benefits for both sets of shareholders:

Adriatic and Tethyan are pleased to announce the execution of an Acquisition Agreement pursuant to which Adriatic will acquire 100% of the issued and to be issued share capital of Tethyan, by way of a Plan of Arrangement under the Business Corporations Act (British Columbia).

The Plan Consideration represents an implied price of C$0.184 per Tethyan share based on the 20-day VWAP of Adriatic at 8 May 2020, representing an implied equity value of C$14.7 million (US$10.6 million).

The Plan Consideration represents a premium of:

The Transaction is subject to several conditions as set out in the Acquisition Agreement, including but not limited to:

The Acquisition Agreement contains certain customary non-solicitation and right to match provisions, with a break fee of C$700,000 and costs and expenses of Adriatic up to C$150,000 payable by Tethyan to Adriatic under certain circumstances, and C$350,000 payable by Adriatic to Tethyan under limited circumstances. On closing of the transaction, Tethyan will apply to delist its shares and cease to be a reporting issuer in all jurisdictions in Canada.

Adriatic and Tethyan have entered into a Secured Convertible Loan Agreement whereby Adriatic has agreed to advance to Tethyan a secured convertible loan in the amount of up to €1.3 million in three tranches, in order to allow Tethyan to make the required payment of €625,000 (of which €100,000 has already been advanced) under the EFPP Agreement to complete the First Closing, commence confirmation drilling on Kizevak, and to fund the expenses of Tethyan through to completion of the Transaction. The key terms of the Convertible Loan Agreement include the following:

TETHYAN BOARD RECOMMENDATION AND SHAREHOLDER SUPPORT

The Board of Directors of Tethyan has unanimously approved and resolved to recommend that its shareholders vote in favour of the Transaction.

The directors and senior officers, and other shareholders of Tethyan, representing approximately 54.3% of the issued share capital of Tethyan, have entered into voting support agreements committing to vote their Tethyan shares in favour of, and to otherwise support, the Transaction. Additionally, Lock Up Agreements have been entered into by shareholders of Tethyan covering 38.3% of issued capital agreeing not to, directly or indirectly sell, transfer or otherwise dispose of any Adriatic or Tethyan shares until the earlier of: (a) six months after the Effective Time; and (b) any date after the Effective Time where the volume weighted average price of the Adriatic shares on the Australian Stock Exchange for the preceding 30 calendar day period is $2.00 (Australian dollars) or more.

Tethyan Resource Corp. is a precious and base metals mineral exploration company incorporated in British Columbia, Canada, and listed on the TSX Venture Exchange. Tethyan is focused on the Tethyan Metallogenic Belt in Eastern Europe, mainly Serbia, where it is acquiring and exploring a portfolio of quality precious and base metals projects with known mineralization and compelling drill targets. Tethyan emphasizes responsible engagement with local communities and stakeholders, and is committed to the proactive implementation of Good International Industry Practice (GIIP) and sustainable health, safety and environmental management.

Adriatic is a dual listed (ASX and LSE) precious and base metals explorer and developer via its 100% interest in the world class Vares Project in Bosnia & Herzegovina. The Project comprises a historic open cut mine at Veovaca and brownfield exploration at Rupice, an advanced proximal deposit which exhibits exceptionally high grades of base and precious metals.

Adriatic has attracted a world class team to both expedite its exploration efforts to expand the current JORC resource at the high-grade Rupice deposit and to rapidly advance the Project into the development phase utilising its first mover advantage and strategic position in Bosnia.