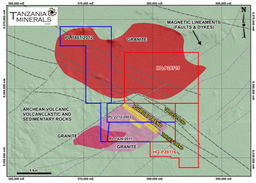 Tanzania Minerals Corp. (TSX-V:TZM.V) (FRANKFURT: TM0.F) is pleased to announce that it has been provisionally granted two additional licences contiguous to the recently acquired Igurubi Gold Property. The acquisition increases the Igurubi project area by 117.46 km2 for a total project area of 228.32 km2.

Robert Dzisiak, CEO of Tanzania Minerals Corp., stated “We are pleased to announce that we have pursued these strategic licences, which will provide further exploration opportunities to build on the existing Igurubi project.”

The Company applied for the two licence areas in the Tabora Region, Tanzania, in early October, 2014, and the Ministry of Energy and Minerals accepted the requested application.  The Company accepted the terms of the Ministry of Energy and Minerals, and the licence areas were assigned provisional permit numbers HQ-P28715 and HQ-P28716) on 20 October, 2014. Full prospecting licence (PL) numbers will follow in due course.  The permits cover a total area of 117.46 km2.

Licence HQ-P28716 covers an area of 78.84 km2, and is contiguous to the south-east of the existing Igurubi gold property, which is located within the Nzega Greenstone belt of the Lake Victoria Goldfield.  The licence is underlain by Archean volcanic and volcanosedimenatry rocks, and transected by the same northwest-trending structures that host gold mineralization at Igurubi.  Gold mineralization at Igurubi is currently being worked by artisanal miners and coincident with gold soil geochemical anomalies and argillic alteration.  The presence of bedrock gold has also been confirmed by RAB, air core and RC drilling (see Company press release 21 October, 2014).  All current observations suggest that the Igurubi mineralized structures trend towards HQ-P28716, and the suggested along strike extension will be the focus of exploration activity.  The area is covered by a thick sequence of paleo-lake sediments, so exploration method employed will include induced polarization (IP) and ground magnetic geophysics to help define potential drill targets.

The second licence, HQ-P28715, covers an area of 38.62 km2, and occurs to the north and northeast of the current main strike of mineralization at Igurubi.  The licence is contiguous to HQ-P28716 and one of the existing licences (PL2212/2003).  Most of the licence is underlain by a large granite pluton, with volcanic and volcanosedimenatry rocks at the margin.  Historic regional airborne geophysics has identified structures that are parallel to the known mineralization at Igurubi, and these structures will be the focus of ground geophysical and geochemical surveys.

The Company will provide further updates as work progresses and plans for further exploration are finalized.

Tanzania Minerals Corp. is an emerging junior exploration company trading on the TSX Venture Exchange. The company has an extensive portfolio of projects in Tanzania.