Abitibi Royalties Inc. (TSX-V: RZZ) (OTC: ATBYF) is pleased to provide its Q2-2021 corporate update on its net smelter royalties at the Canadian Malartic Mine, Canada’s largest gold mine, near Val-d’Or, Québec, cash generation, Project Generator Division and on its early stage royalties. The Company is unique among its peers due to its strong treasury, no debt, monthly dividend, share buyback program and by having the lowest outstanding common shares in the gold mining sector.

Royalties at Canadian Malartic Mine

The Canadian Malartic Mine, where Abitibi Royalties owns various NSRs and a net profit interest, is jointly operated by Agnico Eagle Mines Limited and Yamana Gold Inc. Abitibi Royalties’ NSRs and NPI cover portions of East Malartic (3% NSR), Odyssey (3% NSR), Sladen (3% NSR), Sheehan (3% NSR), Jeffrey (3% NSR), Barnat (3% NSR), Gouldie Zone (2% NSR) and the Charlie Zone (2% NSR). In addition, the Company holds a 1.5% NSR on the Midway Project and a 15% NPI on the Radium Property, which are all operated and located at, or proximate to, the Canadian Malartic Mine (Fig. 1).

The mine operators stated that throughout 2021 the mine will continue its transition from the Malartic pit to the Barnat pit where commercial production was declared on September 30, 2020. Additionally, the Canadian Malartic Mine is undertaking the required pit pushback to obtain the optimized ounces as per the revised open pit design. Abitibi Royalties holds a 3% NSR on the eastern portion of the Barnat pit (Fig. 1) which is expected to be the Company’s main source of royalty revenue from 2021-2023 at Canadian Malartic.

2) Odyssey Ramp Development Ahead of Schedule & Below Budget

In Q1-2021, Agnico Eagle and Yamana announced a positive construction decision of the Odyssey Underground Project at the Canadian Malartic Mine. Construction of surface infrastructure and the portal in preparation for development of the ramp started in Q3-2020.

During Q2-2021, underground development of the ramp continued. Approximately 402 linear metres of ramp development were completed, which is ahead of schedule and at a lower development unit cost than anticipated. The ramp is designed to mine the upper zones of the Odyssey Project and provide further exploration access. During the current quarter, the first exploration drift is expected to advance, as well as the excavation of the first ventilation raise. The budget for the ramp is USD$23.4 million for 2021.

During Q2-2021, the operators announced that the excavation of the shaft collar and the concrete lining of the first 27 metres were completed. The concrete raft of the headframe and the slip form pour are expected to be completed in Q2-2021, while the structural steel installation is expected to start in Q4-2021. All of the mechanical and electrical purchase orders for the sinking hoist and auxiliary hoist have been issued. Both hoists are expected to be delivered and installed by Q4-2022. All surface construction activities are on target and shaft sinking is expected to resume in the second half of 2022 once the headframe construction and hoists installations are completed.

The operators have stated that the project requires modest capital in any given year that is manageable and fully funded using Canadian Malartic’s cash on hand and free cash flow generation, and that no external funding is required.

On July 8, 2021, Agnico Eagle announced an update on the Odyssey exploration drilling, which included two drill holes from the Chert Zone. The Chert Zone, was historically part of the East Malartic Mine. The drill holes included 7.0 gpt gold over 77.9 metres and 6.1 gpt gold over 28.2 metres at a depth of approximately 900 metres below surface. Both holes are reported as core length, with the true thickness currently unknown. The results in the Chert Zone suggest the potential to add additional mineral resource between the East Malartic and East Gouldie deposits. Also, as previously reported by the Company, regional exploration at the Radium-Nord property has also returned significant gold values from the Radium gold zone (Fig. 1) and confirmed the modelled geometry. The zone remains open for expansion. No assays from Radium-Nord drilling have yet been published by the operators of Canadian Malartic.

The operators also announced that the first underground exploration drill bay was completed in Q2-2021 and underground drilling started on July 7, 2021. The underground drill program will aim to define and validate the upper levels of the Odyssey South Zone and to better understand the local geology of the Internal Zones at Odyssey.

On June 10, 2021, Frontline Gold Corporation announced that drilling had commenced on the Menderes Gold Project in Turkey (Fig. 2). The Menderes Gold Project is considered the Company’s most prospective early stage royalty due to 1) its close proximity to known mineralization and mining infrastructure and 2) the size of the Company’s royalty (3% NSR).

The drill program at Menderes will concentrate on the southeastern extension of the Kokarpinar vein system, part of the Eldorado Gold Corporation’s (“Eldorado”) Efemcukuru Mine that has been in production since 2011. The Efemcukuru Mine is forecasted to produce 110,000 ounces of gold in 2021 at an average grade of 6.6 gpt gold. Frontline has reported that drilling by Eldorado has been testing for the Kokarpinar extension within 20-100 metres of Frontline property boundary. The Frontline exploration program will initially consist of a 1,000 metres of drilling.

On April 14, 2021, Pacton Gold Inc. announced that it had completed its 8,919 metre (24 holes) winter drill program at the Red Lake Project in Ontario, with assays pending. Abitibi Royalties holds a 1% NSR on multiple areas being targeted by Pacton. Pacton also announced that they have begun their summer surface exploration program, including soil sampling, prospecting, till sampling, mapping and outcrop stripping. These exploration activities are designed to improve targets for existing prospects and generate additional drill targets for the next winter campaign.

The Company has been informed by Eagle Ridge Mining Ltd. (“Eagle Ridge”) that they have completed separate NI 43-101 reports for the Malartic South and Cadillac Shear projects in Quebec. The Malartic South Project adjoins the Canadian Malartic Mine to the south and the Cadillar Shear is located near the Goldex Mine. The NI 43-101 reports’ recommendations for the combined projects include a phased exploration program totalling approximately CDN$3.6 million. Eagle Ridge is currently seeking a partner in order to advance the projects.

As part of the Company’s strategy to expand its royalty holdings through organic growth, Abitibi Royalties has set up a Project Generator Division with the view to selling or optioning mineral projects while retaining a royalty. The initiative is designed to generate a competitive return on capital, expand the Company’s royalty holdings, while employing a limited amount of working capital. The Company will evaluate paying the cash generated from the Project Generator Division to shareholders through additional dividend increases.

During Q2-2021, Abitibi Royalties assisted Eagle Ridge in identifying possible partners for the Authier North Lithium Project (Fig. 3). On July 16, 2021, it was announced that Eagle Ridge had entered into an agreement with Power Metal Resources plc (“Power Metals”). In addition to the 1% NSR Abitibi Royalties holds on the property, the Company is entitled to 15% of the net sales proceeds received by Eagle Ridge. During the two-year option, Abitibi Royalties is entitled to approximately CDN$35,000 in cash and shares, plus an additional 0.1875% NSR (for a combined 1.875% NSR). A total of 0.075% of Abitibi Royalties’ NSR can be repurchased by Power Metals for CDN$75,000. The Authier North Lithium Project adjoins the Sayona Quebec Inc. Authier Project, located approximately 40 kilometres north of Malartic and is in the process of being permitted for mining.

Power Metals intends to complete geophysical surveys that aim to model the possible down-dip extension of the lithium bearing pegmatite onto the Authier North Lithium Project.

As announced on February 16, 2021, Abitibi Royalties has entered into an option agreement with Xplore Resources Corp. where Xplore can earn 100% interest in the Upper Red Lake Project by issuing CDN$337,500 in common shares during a two-year period and granting Abitibi Royalties a 1.5% NSR.

On July 26, 2021, Xplore announced their plans for the Phase 1 exploration program at the Upper Red Lake Project. Phase 1 includes a heliborne high-resolution magnetic (“MAG”) survey. The survey will be used to better define mineralization and aid in the future drill targeting for Phase 2.

During Q2-2021, the Company’s cash generation1 totaled approximately CDN$1.3 million, with approximately CDN$0.5 million coming from the Company’s 3% NSR at the Canadian Malartic Mine. Royalties from the open pit portion of the Canadian Malartic Mine commenced at the end of Q4-2018 (the Company’s core underground royalties at Odyssey are under construction and not yet in production). The remainder of Company’s cash generation during the quarter came from options premiums2 (CDN$0.7 million) and dividends (CDN$0.2 million).

The Company has 12,462,610 shares outstanding and also on a fully diluted basis. As of July 30, 2021, the Company’s treasury of cash and marketable securities totaled approximately CDN$52.5 million3.

On December 7, 2020, the Company’s board of directors approved a 20% dividend increase from CDN$0.15 to CDN$0.18 per common share on an annualized basis (CDN$0.015 monthly). The monthly dividend payments for Q3-2021 are shown in Table 1. below. The September 2021 payment will represent the 21st dividend payment made to shareholders since the Company’s adoption of a dividend policy in September 2019. The full amount of the dividends will be designated as an “eligible dividend” as defined in the Income Tax Act (Canada).

Abitibi Royalties owns various royalties at the Canadian Malartic Mine near Val-d’Or Quebec. In addition, the Company is building a portfolio of royalties on early stage properties near producing mines and generating mineral projects for sale or option. The Company is unique among its peers due to its strong treasury, no debt, monthly dividend, share buyback program and by having the lowest outstanding common shares in the gold mining sector.

Although the northwest portion of the Odyssey South Zone and certain Internal Zones at the Canadian Malartic Mine are located within the areas covered by the Company’s NSR royalties, Abitibi Royalties can make no assurances that all or any of the current underground drilling will target these areas. Similarly, the Company can make no assurances that the drill results from the Chert Zone or the drilling recently completed by Pacton at their Red Lake Project are respectively contained within the Company’s NSR royalty boundary.

Mr. Glenn Mullan, Chairman, is the Qualified Person (as defined in National Instrument 43-101 – Standards of Disclosure for Mineral Projects) who has reviewed this news release based solely on the public disclosure by the various companies and without independent verification and is responsible for the technical information reported herein. 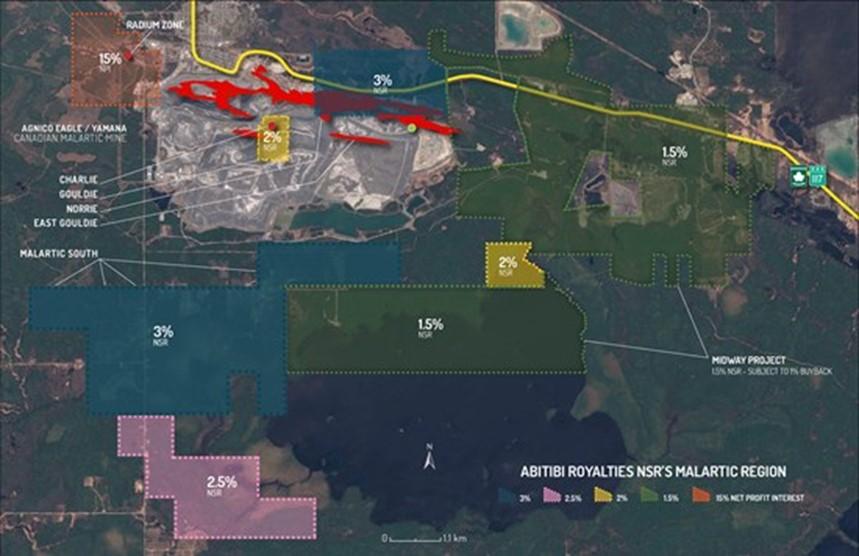 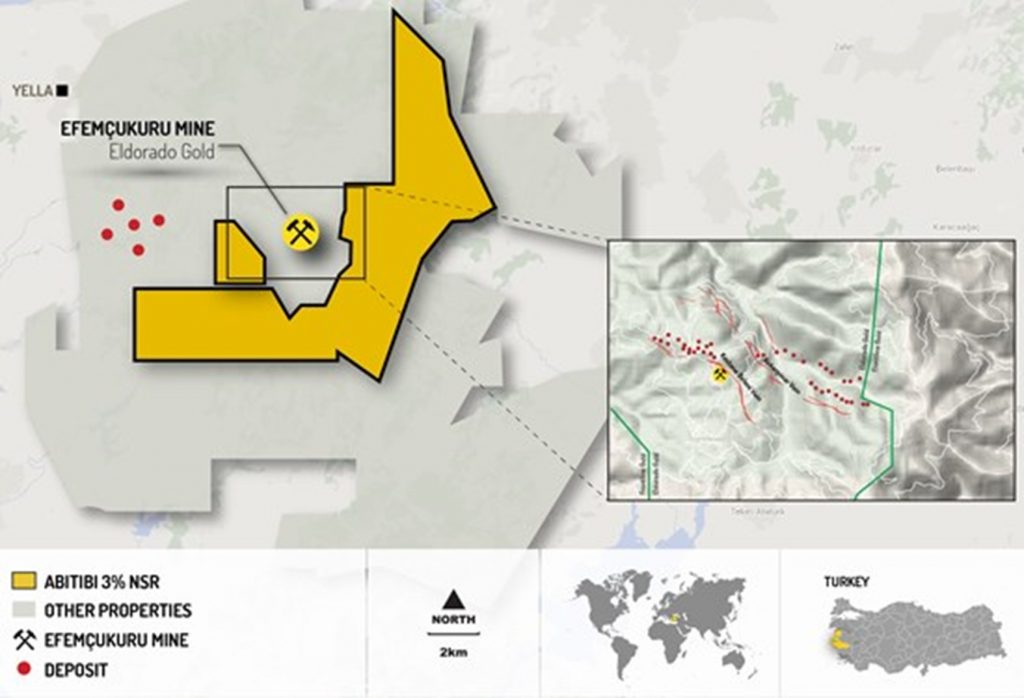 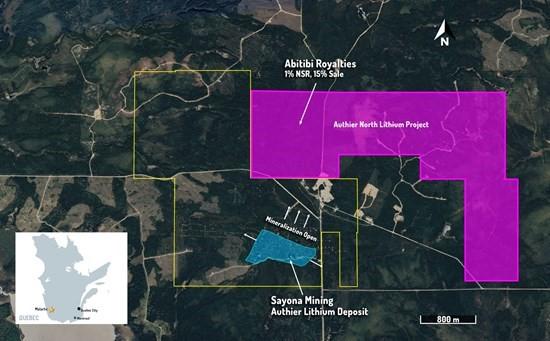